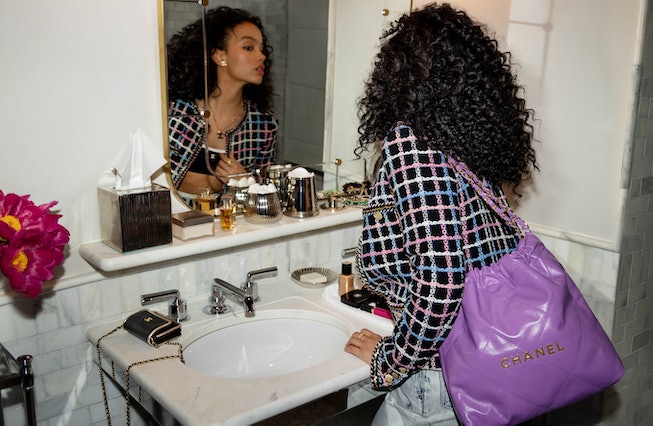 Courtesy of Chanel/Inez and Vinoodh

As we transition in our spring-ready wardrobes, we’ll be swapping out our mini bags for bigger totes, as the maxi-sized accessory is making its comeback, along with a co-sign from Chanel. The French fashion house debuted its latest campaign to highlight its signature and roomy 22 bag.

Chanel’s new campaign on coveted shoulder bag was directed by duo Inez and Vinoodh and is set to be unveiled in two parts: a series of photographs, which were revealed on Wednesday, April 6, and three films that will soon be released. Its star-studded cast consists of Chanel’s own muses Whitney Peak, Lily-Rose Depp, and Margaret Qualley, as the trio takes viewers through a day in their lives in New York, Los Angeles, and Palm Springs, respectively.

First presented at Chanel’s Spring 2022 runway show during Paris Fashion Week, the 22 bag comes in a slew of new designs, including a pink quilted leather bag adorned with gold “Chanel” lettering on the front and a metal chain interlaced with leather. There are also other colorways, like white with black “Chanel” letters, black with white letters, and a leather bag in lilac. The new silhouette can also be worn as a tote or a backpack, as seen on Qualley in the campaign’s upcoming films.

While we wait for Chanel’s official video clips for Depp, Peak, and Qualley to drop in the coming days, check out the latest campaign images, below.