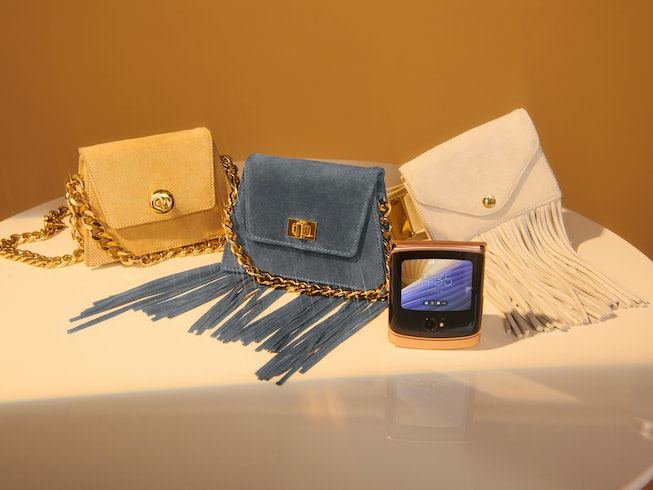 Christian Cowan has released his first line of handbags in a partnership with the new Motorola Razr. The mini bags were inspired by the Razr’s iconic flip style, and are just big enough to hold the necessities: keys, wallet, face mask, and, of course, phone.

“We haven’t released handbags before. It’s such an obvious category that everyone has been asking for,” Cowan told WWD. “And it seemed like the perfect opportunity to come up with kind of a really unique, special kind of purse.”

There are three bags that make up the collection, including a fringe belt bag, a gold crossbody with chunky gold chain, and a blue fringe top handle.

Like many millennials, Cowan has a personal relationship with the Razr flip phone — which first hit the market in the mid-2000s, swiftly reaching must-have status among the young Hollywood set — and that made the partnership that much more special.

“I feel like I’d had such a long relationship with the Razr phone, because I had one when I was a teenager — it was like my favorite thing,” he said. “And now it’s so cool, having that updated Razr, because it’s so fabulous, with a bendy screen and so on… it just felt like me, as a brand.”

The new Christian Cowan x Motorola bags range from $195-$245. Get yours on Christian Cowan’s website or Instagram shopping. Check out photos of the collection’s campaign below.