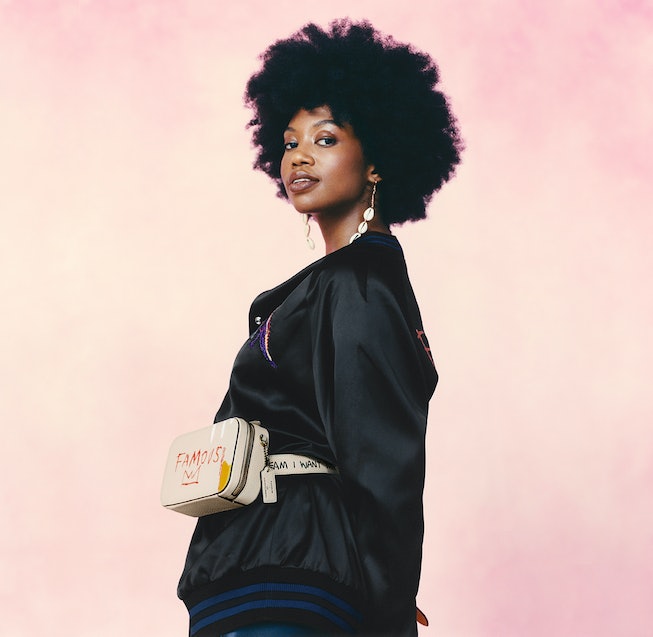 Back in 2015, then-high-school-senior-student Kyemah McEntyre made waves on the internet for her self-made, dashiki-printed prom dress. Fast-forward five years later, and the artist and designer, who graduated from Parsons in 2019, is making moves in the fashion industry. Not only is her small business of paintings and garments thriving, but she landed her first-ever major campaign deal with Coach.

McEntyre, who stars alongside brand ambassadors Michael B. Jordan and Jennifer Lopez, models the heritage brand’s collaboration with Jean-Michel Basquiat, which debuted at New York Fashion Week during Stutart Vevers for Coach’s Fall 2020 runway show. Her involvement with the global campaign is a natural step in her growing creative career, since Basquiat has long been an influential force in her work.

“Basquiat is a staple word in art vocabulary. It’s always been around for me even when I was in elementary school and through middle school, but it wasn’t until my freshman year in college where I made my own personal encounter with Basquiat,” McEntyre tells NYLON, recalling when she visited the Brooklyn Museum’s exhibition on the artist. “It just blew my mind. Of course, we all love Basquiat for so many reasons but my first interaction with him was seeing his notebooks and his sketchbooks. I just fell in love with him as an artist and I was super inspired by his rawness.”

Ahead, we caught up with McEntyre about how Basquiat has influenced her work, how she’s evolved (and stays inspired) as an artist and designer, and what she hopes to see change in the fashion industry. Read on for more and check out the rest of Coach’s collaboration campaign, below.

How has Basquiat influenced your own artwork and fashion design?

Basquiat’s audacity to just be real transformed all of these old notions of what I had of fine art. In my head, valuable art was art that could sell in the millions or art that belongs in beautiful homes. It had to be super prestigious or had to be perfect. My work is so much about the imperfections of society and the things that aren’t always beautiful. Somehow his work gives the eye hope even when things look disastrous, which is funny because life and with my own fashion design and with my paintings, I always put that type of balance first. Balance in the sense that things aren’t always what we want them to be. Things aren’t always this fantasy world and so his work has inspired me in that way.

You were first recognized for your dashiki-printed prom dress that went viral in 2015. How have you evolved as an artist since then?

It’s really funny because when I speak to people now, they’re like, ‘It felt like it was just yesterday!’ And it feels like a decade for me. My life has been such a whirlwind and it’s really helped me to evolve as an artist. What I will say in regards to where I was in 2015 and where I am now is that, in 2015, I was catapulted into teacherhood where there were thousands — and still thousands of people — who were inspired by me and would look to me for guidance in wherever they may be in art. A lot of people look to me in regards for inspiration and I felt myself being very much still in the role of teaching people through my own examples and own designs and art pieces.

Since then, I have actually become more of a student. I didn’t stop learning and stop being a student because I graduated high school and then college in 2019. If anything, college really set me up for the way that I would learn for the rest of my life, and so now it’s about me engaging in society and learning from society and recognizing what society needs more than ever, which has always been my point from the start. The prom dress was in regards to society and trying to make some changes through art and so now I’m just learning more and more. Great leaders are always great listeners and it’s important that we understand the world that we’re trying to design for. That’s the space that I’ve been in.

Since graduating college in 2019, what has the past year been like for your small business and creative work?

2020 is definitely the year for change, but really be a catapult for change, since it’s just the beginning. There’s been a rise in the support for Black businesses, which I am extremely grateful for, not just on a business level but on a mental health level. It’s very easy to feel like you don’t have support or people can’t support you even if they wanted to because of financial situations. It was heartwarming and amazing to see such support for Black businesses because I don’t think we’ve ever gotten the attention like we had this year. It’s nice to see change move into spaces where it really matters.

How have you stayed inspired as an artist over the past year?

This time has given a lot of people space to themselves and I know that, for me, I’ve been able to dedicate myself to my brand in a way that isn't particularly infiltrated by the things that I had to do before quarantine. It’s been a great self-reflection time for myself and I’ve been able to process and create from new points of view because time has slowed down and I’m able to observe the world a little bit better. Before, especially in this age of social media, we were so much about releasing and putting things out there that people will click on and like, but this time during quarantine, for myself, has really been about receiving and being receptive and learning more so that I can put out into the world what is actually necessary and with real intention.

The fashion industry is definitely in a state of change right now. What do you want for its future?

We know fashion is always moving and adjusting to society and, right now, society itself is moving and adjusting in ways it’s never really done before. But I can’t help but to notice that fashion is not moving as much as society is moving. I have to be honest about that. It feels, at its deepest core, that fashion, especially the value of fashion, is still in the space where it can only be defined by a particular group of people and then the rest of the world must react to it.

It’s kind of delusional that we don’t engage with the real world. For me, I feel that fashion is still very separate from the real world. I think it’s time that we start recognizing fashion as not just about status symbols, but that fashion and how you present yourself can be world-changing. It can start conversations that matter.

What are you most excited about for the future of fashion?

There’s so much to be excited about with fashion because we’re in a Tetris-y space where things are being removed and things are being placed in. It’s such a limitless space. One thing I’m excited about is the recognition of Black culture as a force and the support of those forces. Another thing is sustainable wear. It’d be really interesting to see sustainability go as far as it really can. I’m very proud to say that I’m one of the driving forces of sustainable fashion and style because it’s necessary and the best thing that we can possibly do at this point in our lives. But we should recognize that sustainability is not just about ‘let’s find natural dyes.’ It goes so much deeper than that. Sustainability can involve a community, sustainability can involve people, sustainability is a lifestyle.

I’d love to see fashion move in a more realistic way. Don’t get me wrong, I love glamour and things that are beautiful, but it’s time that we get real.