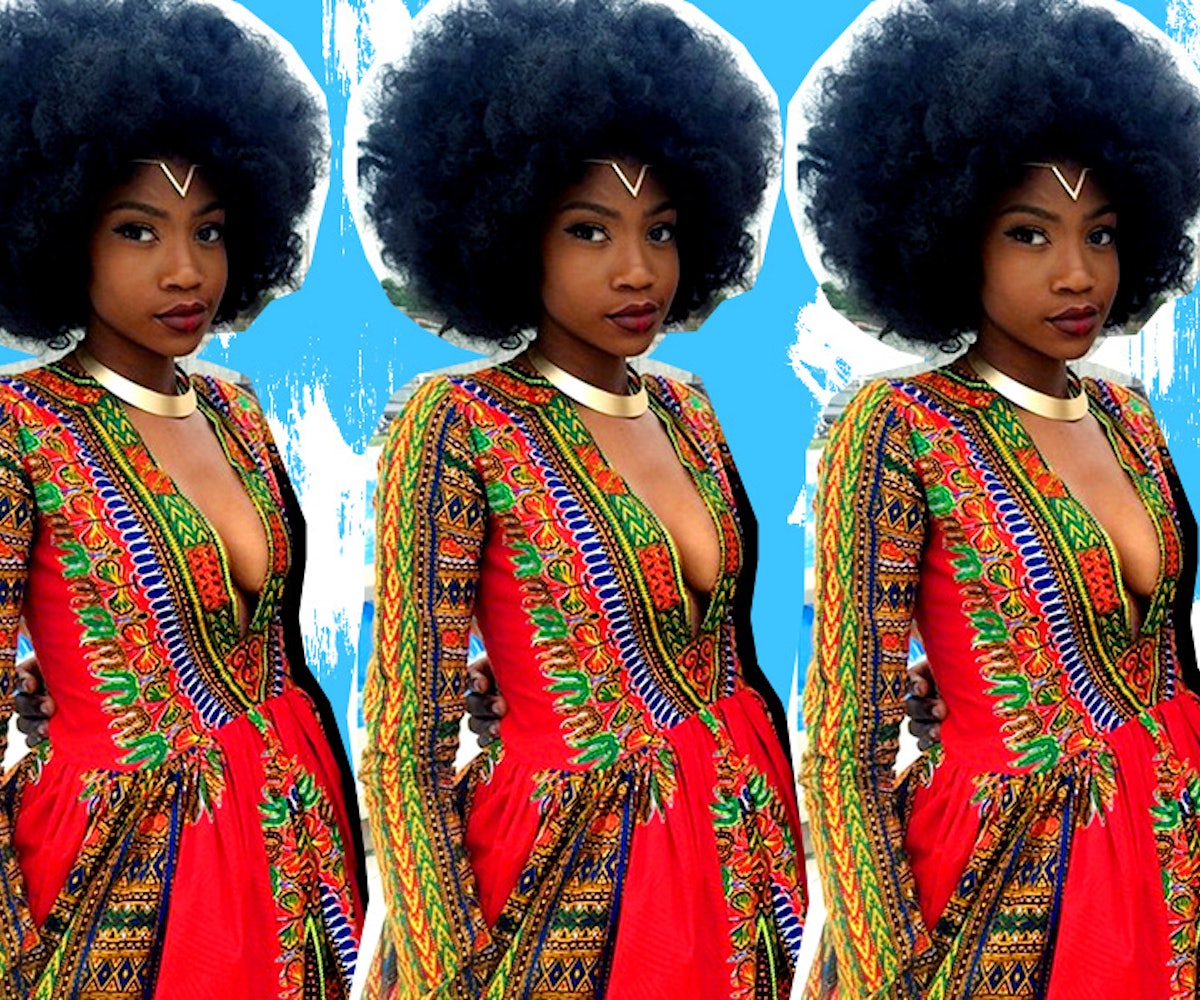 The last few months of my senior year, high school was overrun by a prom-obsessed pandemonium. With a Facebook page dedicated to posting our dress picks and hundreds of department stores and boutiques at our disposal, my peers transformed into prom-zillas — ones who would stop at nothing to find the prom dress of their dreams. When I finally found mine, it turned out that another girl had already had it, and so, a one-sided (read: not on my end) online tiff broke out. Because while we were spending an absurd amount of money on an evening dress as if we were attending the Met Gala, we were still immature teenage girls. In retrospect, it would have been much, much easier to find and design our own custom-made dresses.

It turns out that Kyemah McEntyre was much smarter than my collective graduating class. The 18-year-old sketched and designed her own prom dress, which has since gone viral. The patterned dress, accessorized with a gold collar and headpiece, was intended to be a statement against racial stereotypes. In one of many captions, she wrote:

"Throughout the world, we have people who do not notice each others' essence and humanity. We stunt our collective spiritual growth by allowing assumptions and stereotypes to cloud our mind, and thus, our physical reality. We let these negative ideas get the best of us, and in turn a world of isolation is manifested by our lack of sensitivity and desire to sympathize with each other. This results in a world in which people live within the confines of their own space, isolated from each other and separated from the rest of the world. Sometimes we get trapped in our own [prejudiced] ways. We don't notice how the idea of a particular type of person changes the way we live our lives. The most creative people are the ones who step out of their comfort zone and take advantage of the world around them. My abilities as an artist allow me to experience the benefits that versatility fosters. Being exposed to all kinds of people and cultures is the muse for my artwork. I am an aspiring artist who is very passionate about the connection between art and the world. I believe that in order for society to gain a wider horizon, we have to be willing to acknowledge other people from differences, beliefs, morals, and values. I would like to take this moment to say that you have to understand who you are because if you leave that space open, you leave your identity in the hands of society. Don't let anyone define you. Beautiful things happen when you take pride in yourself. #blackgirlsrock"

She was later crowned prom queen because, well, read the above again.