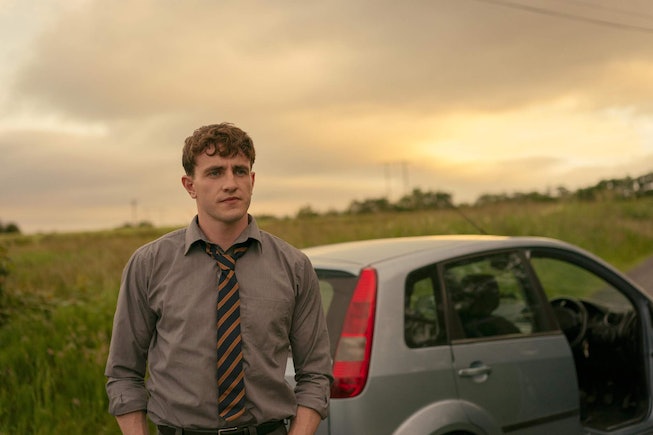 The new Hulu show and adaptation of the novel Normal People has been an unsurprising hit, but the real star of the series is the chain necklace worn by Paul Mescal's character Connell. The simple piece of jewelry has become such a sartorial hit that it's even inspired men to start shopping for one of their own.

The love for Connell's chain has even prompted a fan to make its own Instagram account, which currently has over 38K followers, including famous fans like model Adwoa Aboah. In an interview with Refinery29, the show's costume designer Lorna Marie Mugan emphasized that the chain-wearing was very much intentional.

"It is the constant with [Connell]," she said. "He carries it right through the story. And Marianne says she recognizes it because he had it in school, so it was crucial that he bring it right the way through. He has nothing else really that stands out."

She also added that Mescal was very intent on the presence of the chain throughout Normal People, adding, "It was so important to Paul that the chain was there all the time.”

Lyst also reports that Michael Jordan has caused an uptick in searches for basketball wear, thanks to his ESPN documentary The Last Dance. Nike's Jordan 1 sneaker, basketball shorts, and tank tops have all seen an increase in searches since its release in April.

Crocs are also back for the spring season with a 32% increase in searches each month, with people being particularly interested in floral and leopard print versions.

To read the rest of Lyst's recent report, head over to its website.

NEXT UP
Fashion
How to Shop Telfar's Rainbow Shopping Bag Drop Before It’s Gone
Fashion
You Can Now Wear A Keith Haring Piece On Your Wrist, Thanks To Pandora
Life
Barbiecore Fashion Was All Over The 2022 Emmys
Fashion
How To Wear Your Dr. Martens With Anything