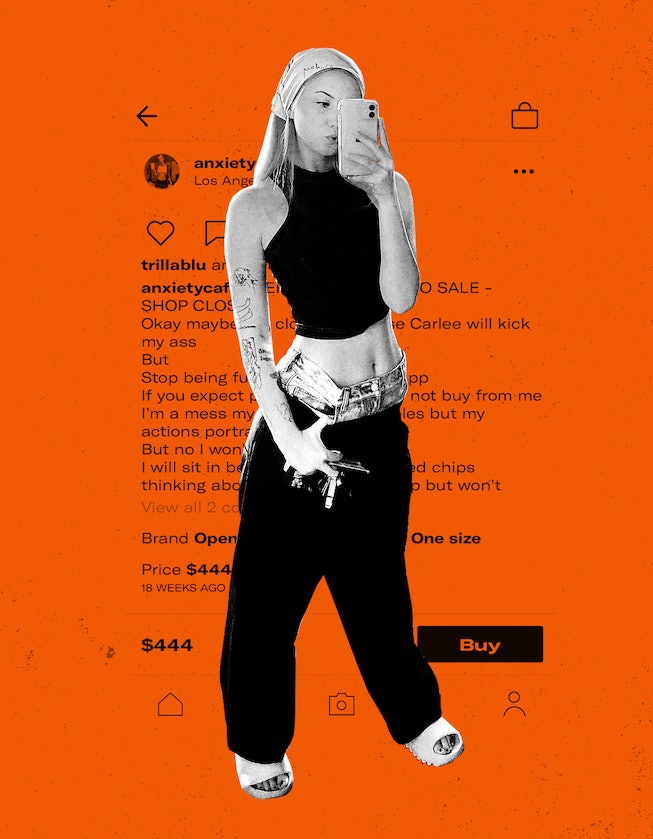 When Mika Kol duct-tapes a vintage LBD to her fridge, takes an iPhone photo with bad lighting and writes a caption about eating the rich (price: $215; timestamp: 3:26 a.m.), she’s rebelling against something, she just doesn’t know what. Hypebeast resale culture? The performativity of influencers? Expectations of femininity? In any case, Kol, 21, is aware that the Depop account where she sells her clothes does not conform to the standards of retail photography. “My account looks like a finsta. And that’s the appeal,” says Kol, known on the fashion marketplace app as @trustfundgoth.

Since late 2018, Kol has made more than $50,000 selling items from her vintage designer collection. Pieces range from the relatively obscure (Free Lance shoes, a Paco Rabanne space-age mini skirt) to cult classics (Jean Paul Gaultier mesh tops, Vivienne Westwood corsets). But lots of her 13,000 followers aren’t there to buy. They come for the joy of reading listings like the one Kol wrote for a pink, leopard-print John Galliano bra:

My mom thinks bras and boys require a good amount of fortitude... For example she advises me not to date guys if they sound fragile. She does not think I’m gentle enough of a person for recovering addicts (regardless of whether or not they managed to graduate from an Ivy while tweaking) or 'emo clowns'. I interpreted the latter as “Pisces” mainly due to being born on the cusp. Momsy thinks it’d be best for my GPA if nobody kills themselves due to me and I agree, that would be really fucked up. Almost as fucked up as not being able to fit this bra. ANYWAY!

Launched in 2011, Depop is a platform for users to sell and buy clothes, designed to look like Instagram and meant to be used exclusively on your phone. (And if that doesn’t scream Gen Z to you, co-founder Simon Beckerman has likened the app to “a rebellious little kid who is not satisfied with what’s out there.”) Like on 25-year-old eBay and 15-year-old Etsy, the typical Depop listing is essentially “Cute dress, worn once!” with a dozen search terms tacked on the bottom.

But unlike any of the dozens of platforms competing for the $28-billion-and-growing secondhand clothing market (ThredUp, TheRealReal and Poshmark, to name a few), the Depop algorithm tends to favor uniqueness and community engagement over, say, photo quality. “The usage of data has to manifest into reaching the lifestyle of our customers,” says Depop’s chief technology officer. As a result, it’s home to a bloggy community of style enthusiasts who are ditching normie product descriptions in favor of creative rants and diaristic musings that only sometimes relate to the garment in question.

"There's something about the industry right now that values conformity. Why not word-vomit, create a relationship with buyers?"

“Goth girl with a trust fund” is the embellished, more ridiculous version of Kol’s real life as a business student who lives in New York’s Financial District, loves her parents, and hates her ex. (In reality, she doesn’t particularly care for goth black⁠ clothing, she says, because no one gets offended when she wears it.) Her Depop captions were standard fare until she wanted to sell some Dolce & Gabbana that she acquired before the allegations of racism surfaced.

In order to not get “bullied,” Kol says, “I had to make it funny and provide historical context. It was also from D&G, which is a label that they haven’t made anything for since 2012. So I didn’t feel like that was morally repugnant. Sometimes when you sell stuff, it does affect the original manufacturer’s bottom line. A good example is the price of Galliano-era Dior impacting the desirability of what’s going on there now.” She ended up going with:

Coco Chanel was a full on Nazi collaborator, Galliano was screaming slurs and harassing POC at bars 7 years back. This is a Dolce and Gabbana corset/mini skirt set. Despite the recent controversy I am selling this set because I think it’s not only hot, but quite flattering… While I don’t support anything Stefano has said in recent years, his team made a damn nice piece.

Kol’s captions hint at the long lives clothes can lead when they’re well-made and culturally significant, a reflection of the Depop ethos, which is antithetical to fast-fashion industry values of trend-chasing and high profit margins at the cost of quality and ethics.

Gillianne Taylor Leigh, 22, is a freelance model whose source of income during the coronavirus pandemic is selling thrifted designer finds on her Depop shop, @anxietycafe. Last week she listed a pair of swim bottoms, succinctly describing them as “supa rare or whateva” before recounting her day: “watching Handmaid’s Tale and accidentally had my boyfriend shove his d*ck in my *ss and now I’m bleeding.” A listing for her DAISY dress asks “how are you dealing with quarantine?” She’s an introvert so she’s doing OK, even though her studio is a mess right now and her leopard gecko doesn’t like the music she is playing.

"There's something about the industry right now that values conformity," Leigh says. "Why not word-vomit, create a relationship with buyers?"

Vintage shopping is about the hunt and, pandemic raging on, scouring Goodwills and consignment stores for Helmut Lang samples can feel like an unnecessary risk or an unjustifiable expense. Depop features like DMs and “saving” posts have spawned digital communities based on shared aesthetics, which is almost as fun as shopping IRL. “If people couldn’t afford most of the items on the page, I wanted there to still be a reason they were checking it,” Kol says. If someone buys from her five times, she considers them a friend, and consults them for caption inspiration.

Leigh describes writing captions as a “modern-day journal” and “therapeutic, a way to be vulnerable.” With LiveJournal, MySpace, Blogspot, and Tumblr no longer en vogue, Depop has emerged as one of the few online outlets for this kind of writing. The subversion of the “advertisement” format makes diaristic Depop shops especially appealing to a jaded generation.

"I love seeing people's genuine personality, especially on the internet where people have a need for perfection."

It’s not a brand-new phenomenon to see personal narratives in descriptions of clothing; writer and artist Emily Spivack collected more than 600 stories that she found hidden inside eBay listings for her 2007-2014 project Sentimental Value. The previous owner of a pair of Louboutins, for example, made a case for the shoes’ power when she wrote, “a very handsome older gentleman stopped me in Neuilly (the chi-chi [Paris] neighborhood where my host family lived) asked if he could kiss my foot, ‘La gauche, s’il vous plait.’ Of course I was terrified so I ran right home!!!” Spivack was drawn to the random and coincidental storytelling of the resale market that allows “normal people” to advertise their wares and, by extension, themselves. Depoppers intentionally spin personal narratives to create a brand.

Self-awareness and sincerity are key to making money off your cultivated persona, especially given that many shoppers find themselves on Depop because they’re done with corporate clothing brands that build images around progressive values despite internal iniquities.

“People’s style expression can be part of their resistance and rebellion. I didn’t want to be virtue-signaling before, but I ended up sharing where I’m donating 40% of my profits to,” says Ella Samson, 17, reflecting on using Depop during global protests against police brutality. She uses her shop to sell the pieces she doesn’t wear and to experiment with creative writing before starting college as an English major this fall.

Lately, she’s been writing stream-of-consciousness fantasies about Dorothy walking down the yellow brick road in platform Mary Janes to a Black liberation meeting. Not everyone gets it. “This one person messaged me and said they thought I was manic because of my caption, and they themselves have a disorder and wanted to talk about it. That was crazy,” she says. “People reach out on Depop. Reaching out to say ‘this is priced too high’ — you would never get that on eBay or Poshmark.”

For Leigh, if your captions are “manic,” that’s a follow. “I love seeing people’s genuine personality, especially on the internet where people have a need for perfection.” Ultimately, a pair of Miu Miu balloon shorts circa AW’10 (“the only good trend to come out of the housing crisis,” according to Kol) can sell themselves. It’s fun to tell a story, and intriguing to potential buyers in a sea of 15 million Depop accounts.

“One day it will be a lot harder to source vintage. Trust me,” Kol says. “I really think recessions drive resale economies because people want to feel like things retain value and matter. The demand for vintage comes from a place of nostalgia.”

As indicated by the price gouging of ’90s Gaultier since the Kardashians started passing around his Venus de Milo top, today’s influencers will determine the value of past clothes — and that includes popular Depoppers writing autofiction from their bedrooms. Kol’s latest project is to raise the market value of True Religion jeans to prove a point to her haters. Another big idea still in the works? TikTokers in Jacquemus, which would be far more fabulous than Brandy Melville but still that aesthetic. If you spot either trend in the wild, you know whose captions to blame.