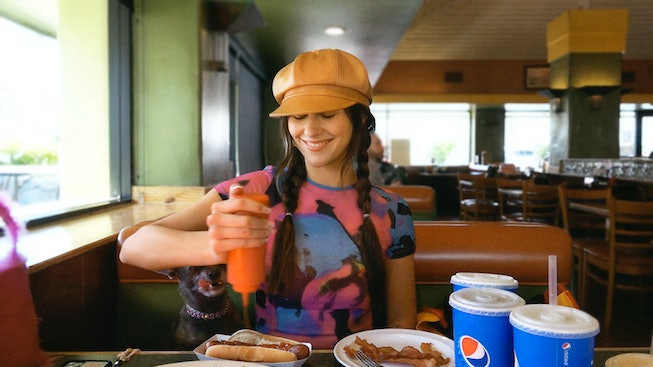 Courtesy of Lack of Color

Self-proclaimed digital girl Devon Carlson has another fashion gig in the works. On Wednesday, she’ll be dropping her collaboration with Lack of Color, an Australian brand whose celebrity fans include Hailey and Justin Bieber, Gigi Hadid, Elsa Hosk, and Kendall Jenner.

Carlson designed a set of summer-friendly hats that take inspiration from some of her favorite pop stars of the early 2000s. “I grew up envying their outfits, head to toe, and wanted to create my childhood dream hat for my adult self,” she tells NYLON.

The collection features three different styles that fit every summer aesthetic. One of the styles, called the “Britney Cap,” is an homage to the iconic pop singer’s own Y2K-era wardrobe, including a newsboy cap that she was often been spotted wearing. For the campaign, Carlson paid tribute to Spears’ film Crossroads and took a road trip with artist and best friend ︎Alana O'Herlihy (better known online as @lilmami_lani) to shoot the collection.

The other two hats are a cowboy style, made from raffia straw and accented with a beaded band of flowers and hearts in pastel colors, as well as bucket hat that wearers can DIY. The reversible accessory (one side is a green plaid, the other is beige) comes with a set of fabric markers so you can add your own designs, too.

In between filming YouTube vlogs and running her family-owned Wildflower Cases business, Carlson has been killing it in the fashion space this year. In addition to Lack of Color, she starred on the cover of Pop Magazine and released a collaboration with Frankies Bikinis with her sister Sydney, modeled for Rolla’s Jeans and Réalisation Par, and even tried her hand at styling for Olivia Rodrigo’s “good 4 u” music video. We have a feeling that she’s only just begun, too.

See more photos from Carlson’s road trip shoot, below. Her Lack of Color collection is available to shop online at 3 p.m. EST.