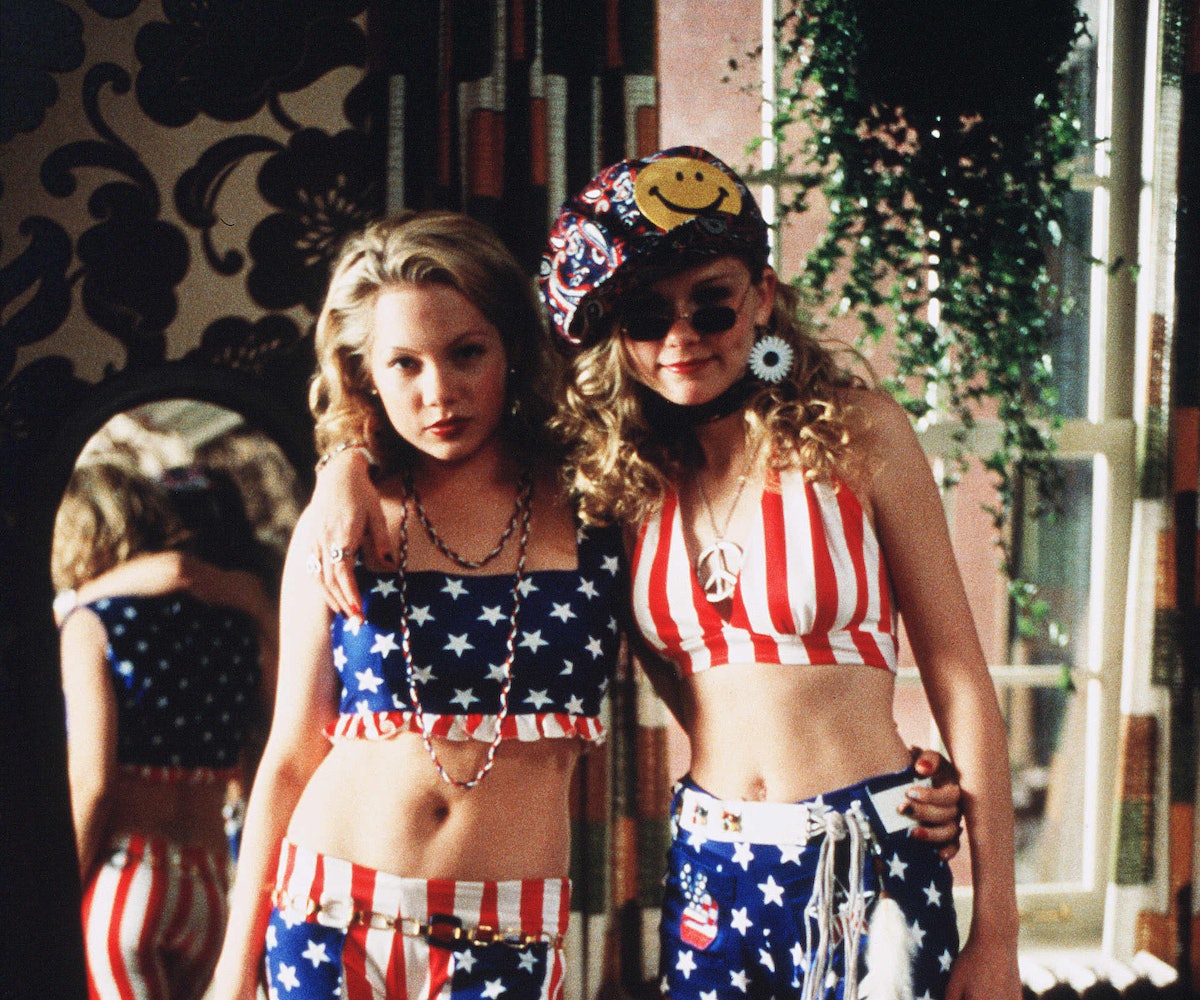 In this year of extreme political anxiety, there is no catharsis quite like re-watching Dick. Andrew Fleming's 1999 film is part-teen movie, part-political satire: The story follows Betsy (Kirsten Dunst) and Arlene (Michelle Williams), two lovably ditzy teen girls who, through a series of silly coincidences, inadvertently end up becoming Deep Throat and ending Richard Nixon's presidency. Watching Dick in the cursed political year of 2020, the film feels like even more of a nostalgic fantasy than it was likely originally intended to be.

Dick is also one of many examples of the '90s fixation on '70s style. That '70s Show, Dazed and Confused, and countless '70s-inspired looks in magazines and catalogs of the time had brought bell-bottoms and polyester back into the limelight — over two decades after they had first reigned supreme — and Dick offers some of the most memorable '90s-does-'70s looks.

Dick and the similarly '70s-set The Virgin Suicides were both released in 1999, officially making Dunst the queen of this essential retro-style niche. Both Dunst and Williams bring an infectious positive energy to their characters, and while both actresses are obviously charismatic and expertly play off one another (their enthusiasm for Nixon's dog Checkers is unforgettable in its pure girlish giddiness), their ability to pull off '70s fashion at its most kitsch is essential to their characters.

As BFFs, Betsy and Arlene are inseparable, and their outfits are always coordinated to a T. They wear a lot of colorful minidresses and tights paired with platform shoes, looks that wouldn't be out of place in an episode of The Brady Bunch or a Seventeen magazine from the era. When they're at home, they wear long-sleeved nightgowns that are sweetly dowdy. Betsy and Arlene don't neatly fit into a '70s archetype. They aren’t hippies or disco queens, but rather feel free to dress according to their moods and experiment with all types of fun looks — a boho headband here, a pair of preppy knee socks there.

When they walk through the White House while wearing stereotypically girly clothes, their ensembles look out of place, but their frivolity is what ends up giving them power. Their outfits are disarming. Psychedelic patterns, shades of pink and purple, and cutesy accessories are so alien to the Nixon White House that they end up becoming the perfect weapon to help bring it down.

Betsy and Arlene's guilelessness manifests itself in how enthusiastically they respond to dressing for an occasion. When they go to meet Washington Post journalists Bob Woodward and Carl Bernstein, they both wear tan trench coats, black hats, and sunglasses. It's a costume that's so obviously "incognito" as to be endearing. They have an idea how they are supposed to look and take it to an extreme.

As they grow increasingly aware of Nixon's corruption, they start to wear more hippie-era peace sign jewelry — a sartorial protest against the Vietnam War. (Meanwhile, the president's peace sign gesture was often used as a signal of victory.) In the film's final scene, following the Nixon's resignation, they sew coordinated outfits from an American flag, and wear them while holding a sign reading, "You suck, Dick," in view of Nixon's helicopter. "Isn't it against the law to cut up the flag?" Betsy asks, while they put together the glorious kiss-off of a costume. "Not if you sew it back together," Arlene responds.

Seeing the girls in their crop tops rendered in stars and stripes is a victorious moment. By the end of the film, they are experts in dressing for subversion. Not only do they bring down a toxic regime, but they look fabulous doing it. Watching the film more than 20 years after its release, in a very different political climate, Betsy and Arlene feel like the patriotic heroines we need today.