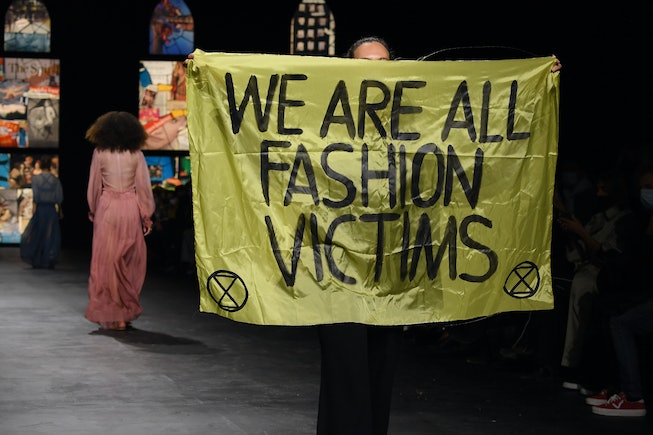 It almost feels like a normal fashion month thanks to Dior's Spring 2021 runway crasher. Vogue Arabia Features Director Caterina Minthe posted a video on Instagram of the surprise protest from Paris Fashion Week on Tuesday writing, "Fabulous #Dior show today ending with a 'We are all fashion victims' Gatecrasher. No one blinked an eye." NYLON reached out to Dior for comment.

The unexpected guest, who, according to WWD, was from the climate action group Extinction Rebellion, stepped onto the runway during the end of the show wearing all black, carrying a tan shoulder bag, and holding a yellow fabric sign that read "We are all fashion victims." Is she wrong, though?

No one attempted to shoo the woman off the runway and the audience appeared to barely notice a disturbance, though it takes a lot more than a rogue woman holding a protest sign to cause fashion people to display any emotion.

The Dior incident comes almost a year after the Chanel Spring 2020 show was interrupted by professional gatecrasher, Marie Benoliel, who charged the runway wearing a vintage Chanel black-and-white tweed suit during the finale. Benoliel was quickly escorted off the stage by Gigi Hadid, who was walking in the show.