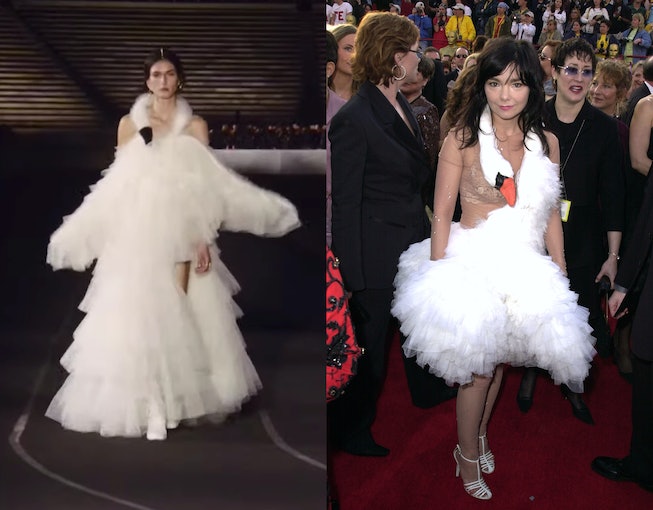 After a few digital-only fashion months, due to the COVID pandemic, runway shows are starting to go back to its physical form. With the latest cruise collection currently making their debuts, designers are putting out all the stops when it comes to an IRL presentation. On Thursday, Dior’s Maria Grazia Chiuri showcased her Cruise 2022 collection, and sticking with tradition among most fashion houses, she chose Athens’ historic Panathenaic Stadium as her far-flung runway destination.

The creative director also took inspiration from the Greek city’s Olympics roots, and, timed with this year’s upcoming Summer Olympics in Tokyo, turned to Athens, which hosted the major sporting event in 2004. During that time, Usain Bolt made his Olympic debut, Michael Phelps won six gold medals and two bronze, and Björk performed live during the opening ceremony. The latter seemed to have pique Chiuri’s interest, as her final look for Dior’s latest collection featured a very familiar dress famously worn by the artist.

The bridal ensemble looks eerily similar to Björk’s swan dress from the 2001 Oscars, designed by Marjan Pejoski. “The swan dress was actually part of my winter 2001-2002 collection and Björk saw it and loved it,” the designer told The Hollywood Reporter in an interview from 2015. “She took it a step further and made an event of the whole thing by creating ostrich egg bags and laying them on the carpet. With the Oscars, there’s a uniform, like the police. Björk was definitely outside the box. Without people like her, it would be boring. Was I surprised by [the reaction]? Of course. Look at us, 15 years later and we’re talking about it.”

And we’re still talking about 20 years later, too! This isn’t the first time that Pejoski’s creation was homaged by a designer. When Valentino debuted its Spring 2014 couture show in Paris, one of the looks included a dress that viewers also compared to The Björk Dress. The designers behind that collection? Pierpaolo Piccioli, and, you guessed it, Maria Grazia Chiuri.

See the similarities for yourself in the Cruise 2022 runway show video, below.