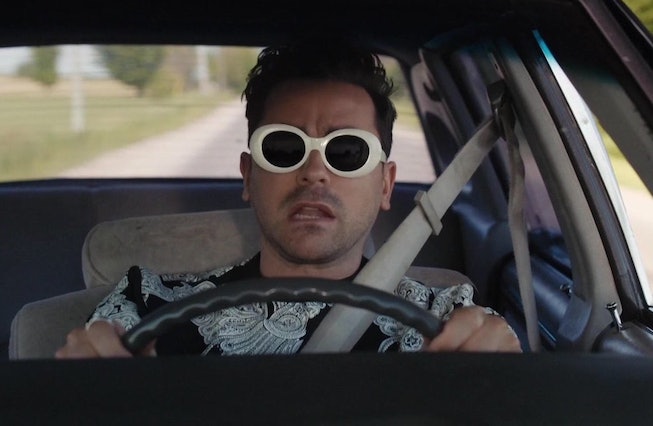 Dan Levy’s DL Eyewear just launched a limited-edition sunglasses style for Schitt’s Creek fans looking to step out a la David Rose. Titled the Pelican (a wink to our favorite disgruntled pelican), the thick, white cat-eye frame are a tribute to Levy’s character and his signature frames from the hit series.

The new launch is the latest addition to his gender-neutral glasses line — a passion project Levy first launched in 2013, then put on hold to film Schitt’s Creek. The actor drew design inspiration from working with the Emmy-winning show’s costume designer, Debra Hanson, and DL Eyewear was all over the show, specifically worn by his father Eugene and co-star Catherine O’Hara.

In an interview with Bustle, Levy shared that sales for DL Eyewear began to rise throughout the filming of the series. Once the show ended, he relaunched with a collection of high-end optical and sun styles in 23 different shapes and sizes, mixing timeless and contemporary themes.

For Levy, eyewear is personal — a statement bridging functionality and self-expression. His motto, “See with love,” is inscribed into every frame, and serves as the company’s mission. DL Eyewear gives back in support of Local Initiatives Support Corporation (LISC), which assists small businesses and prioritizes those owned by women, people of color, members of the LGBTQIA+ community, and entrepreneurs located in historically disadvantaged communities.

In an interview with Vogue, Levy shares that his personal style, along with that of the eccentric David Rose, was a major influence. “Glasses were always something that I wanted to do,” Levy says. “I love the idea of design, and the optical world was the only place where I felt like I had any experience or voice to contribute to the landscape, because I’ve been wearing glasses since I was eight years old.”

The Pelican is now available for purchase exclusively online on thisisdl.com.