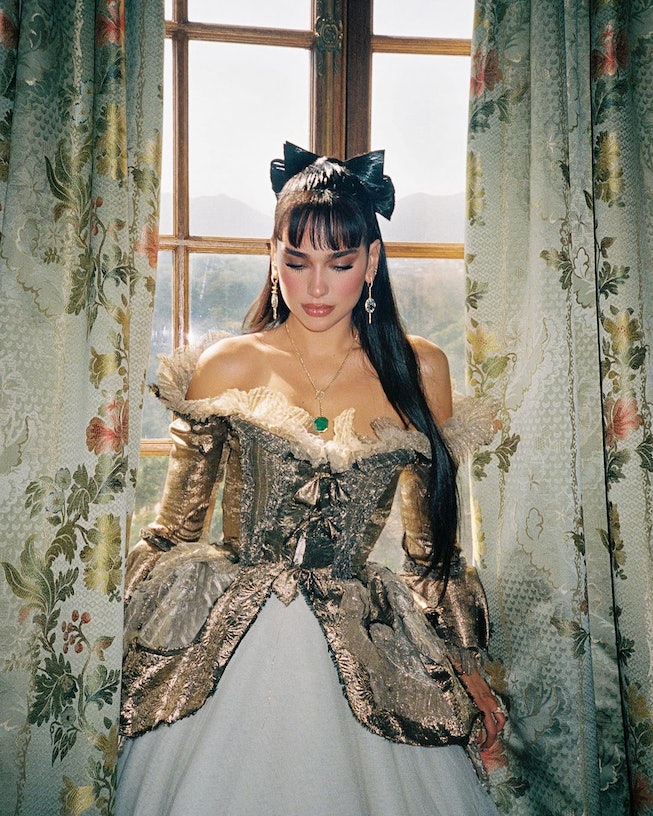 Dua Lipa is still hard at work, as she stars in a brand new music video for “Demeanor” by the late rapper Pop Smoke, which debuted on Thursday. The Future Nostalgia singer channeled royalcore (or Regencycore for the Bridgerton fans) for her latest look, wearing a vintage corset piece from Jean Paul Gaultier’s Spring 1998 couture collection, as hinted by stylist Lorenzo Possoco on Instagram, and Vram jewelry.

While Gaultier’s original 18th-century-inspired design was paired with a fitted black gown on the runway, Possoco swapped the dress for a full white ball skirt instead. Plus, in lieu of a crown or tiara to truly give Lipa the full princess aesthetic, hairstylist Chris Appleton gave the pop star bangs and turned her long brown hair into bows.

Though Lipa is no stranger to wearing throwback designer garments, she’s also the latest celebrity to join the current vintage Jean Paul Gaultier craze. Cardi B, Miley Cyrus, Bella Hadid, Kylie Jenner, Kim Kardashian, and many more have worn the Paris designer’s archival work. Gaultier announced his retirement in January 2020 after a five-decades-long fashion career, and his maison has started a new concept with couture, tapping other designers for collaborations, along with the return of its ready-to-wear line. This switch-up has only contributed to Gaultier’s demand on the resale market, as well.

Vivienne Westwood’s corsets have become a coveted wardrobe staple among celebrities and fashion-savvy Gen Z. But with Lipa’s latest outfit, could JPG’s own version be on the rise? Most likely, yes.

Watch Lipa in the full video for “Demeanor,” below.