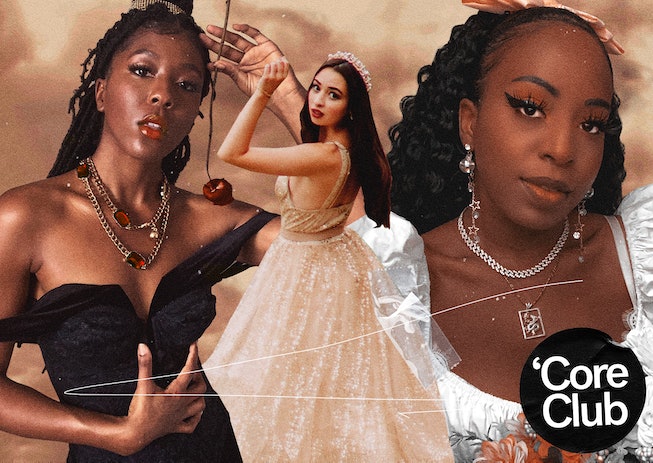 Whether it's a fashion trend on TikTok or a certain style taking over Instagram, internet aesthetics are always changing online. Our series 'Core Club breaks down the looks that you're starting to see a lot on social media and highlights the people and brands channeling it best. Next up: royalcore, princesscore, and Regencycore.

It started with a white tulle skirt. Jordan Brown, who’s known as @hellomissjordan on social media, was immediately drawn to its whimsical style when she was gifted the garment four years ago. “I immediately fell in love with the vibe it gave me and knew I wanted to share more clothes that gave that same feeling,” she recalls to NYLON. Ever since, she’s described her personal style as “everyday princess style,” and recently, she doubled down on what’s known online as “princesscore,” a style that falls under the “royalcore” internet aesthetic.

“I've had Tiktok since around 2019, but only really narrowed in on the princesscore niche in the last few months. It became apparent how much people love the princess content, so I've been focusing on that,” says Brown. “The response has always been so wonderful with so many people saying that they've been inspired to dress the way they want to, not how society deems to be 'normal.'”

One of Brown’s TikTok posts that often goes viral is a video of her piling on a slew of different tulle dresses in nearly every pastel color. The flowy fabric is one of the staples of a princesscore wardrobe, she says, along with ballgowns and corsets. “A little bit like how you'd imagine a person from a fairytale dressing,” she adds, along with brands like Selkie, Teuta Matoshi, JJ's House, and Corset Story. Lirika Matoshi, of the internet-famous “Strawberry Dress,” could very well fit into this category, too, considering her collaboration with Disney on a collection of Cinderella-inspired gowns.

Matoshi’s viral design is usually associated with cottagecore, but the fanciful style can sometimes overlap with princesscore. Kendra Karabayeva, who posts on TikTok via @flowers.fromkenji, says that she was already into the quarantine-friendly aesthetic before creating princesscore-focused content in June 2020. “I did find that the similarities between the two made the transition very natural because both are still super girly, in attitude and in aesthetic,” adds Karabayeva. “But when I’m doing princesscore and royalcore, it’s an opportunity to tap into a mood that’s more glamorous, luxurious, and overall much more extravagant than cottagecore.”

Karabayeva’s princesscore is more of a dark approach to the aesthetic, like wearing black dresses rather than the usual pinks and whites. “I went full-on with a darker palette with rich colors and my followers all said they really liked seeing this take on the aesthetic,” she says. “They were also excited to see Black women represented in this aesthetic because there are quite literally only a handful of us, so for many of them, this was very inspiring to see.”

Indeed, one of Porsha Hall’s most successful TikTok videos, which shows her sipping from a fancy tea set while gazing out the window, has the caption: “Welcome to black girl #princesscore & #royalcore 👸🏾🕊 ☕️.” (She also just started a new YouTube channel dedicated to representing Black women in princesscore.)

“I was already actually doing princesscore and royalcore but I didn't realize it was a certain aesthetic and it was under a certain umbrella,” Hall explains. “So when I finally posted that and actually added the hashtags, I feel like that's when I really started taking off and people were enjoying the content that I had loved for myself. Now like-minded people were following me because they loved it, too.”

The video has racked up close to 200K views since it was posted on Dec. 25, the same day that Netflix released its breakout hit, Bridgerton. Hall, who didn’t know about the show at the time, believes that the engagement she received was likely related to the Regency-era period drama’s growing fan base. “Everybody in the comments was like, ‘Oh my gosh, this is so Bridgerton,’ or ‘me after watching Bridgerton,” she recalls. “I'm like, wait, hold on a second. What is Bridgerton?”

Brown has noticed a huge increase in appreciation for her princesscore style since the show’s release, too. “I finally feel like I'm not the odd one out,” she exclaims. “Although a lot of princesscore style isn't historically accurate — especially in relation to Bridgerton and the Regency era — the idea of dressing in beautiful dresses and corsets has really resonated with a lot of people who maybe felt restricted by mainstream fashion trends.”

Bridgerton’s impact, at least within the fashion space, is hard to ignore. According to Lyst, within the first four weeks of the show’s premiere, searches for corsets skyrocketed by 123 percent, and empire-line dresses jumped by 93 percent. The numbers were so impressive that the global fashion search platform dubbed the buzzing interest as “Regencycore.” “Following the recent rise of other aesthetics such as cottagecore and normcore, and after having seen a strong rise in searches for Regency-inspired pieces, it made sense for the Lyst editorial team to name this trend Regencycore, a term that has since caught on in the industry at large,” says Morgane LeCaer, Lyst's data editor and content lead.

Pinterest, which Hall admits to using frequently to help her channel her royalcore look, also noticed the aesthetic gaining popularity on the platform. “Since the release of Bridgerton last December, Pinners have been shopping on Pinterest to bring an element of royalty into their lives, from puff dresses, to dainty tiaras, to fancy tea sets,” says Senior Insights Manager Swasti Sarna. “People often turn to Pinterest to discover new hobbies and find an escape, and dressing up and pretending to live in a castle is definitely a new fun activity.”

There’s a psychological term behind all of this Bridgerton-meets-royalty craze, too: enclothed cognition. Shakaila Forbes-Bell, who’s the consumer fashion psychologist for Afterpay, breaks it down as mimicking the style of a person and unknowingly taking on their characteristics.

“For example, when you wear a lab coat that you associate with doctors, you become more attentive, when you wear an empire-waist dress that you associate with royalty, you feel more majestic,” she explains. “When it comes to our favorite TV characters, we’re drawn to their clothes and adopt their style because it allows us to embody the traits we admire in those characters. I suspect people are adopting this trend as a way to add a touch of elegance to life, which has been made increasingly unrefined as a result of the pandemic."

Hall channels princesscore far beyond just dressing up. “It's also about your character and how you treat others. One of my best qualities is how compassionate and kind I am to people and how loving I am,” she says. “It's more of a lifestyle and this is what has basically made me who I am, not just the aesthetic. I carry myself as though I already know I was a princess in another lifetime.”

While Bridgerton may have inspired a new wave of appreciation for all things royalcore, early enthusiasts of the aesthetic, like Brown, Karabayeva, and Hall, are experiencing a nice boost in followers and engagement as a result.

“There is no possible way [my video] would be this popular if Bridgerton didn't happen right now, in my opinion,” notes Hall. “And in a sense, sometimes I wonder if Bridgerton didn't come out, would I have really gotten my start on the content that I really wanted to make? And would everybody really like it? I don't question that all the time, but it is interesting for me to think about.”

Royalcore’s rise may likely be tied with the Netflix show's success, but it also seemed inevitable given its similarities with cottagecore and how that particular internet aesthetic stemmed from being in quarantine and lockdown in early 2020. As we approach our one-year anniversary spent mostly at home, chances are we’re more than ready to ditch our simple nap dresses and escape our close-and-cozy quarters.

“In the UK and a lot of other countries we're still in a full lockdown, and a lot of people are struggling with the monotony of everyday life,” says Brown. “The idea of being whisked away to a castle, wearing a beautiful gown and attending a ball is like a beautiful fantasy, and the royalcore aesthetic helps to bring it a little closer to reality.”

NEXT UP
Fashion
The Mini Skirt Was The Must-Have Celebrity Fashion Item Of 2022
Culture
On The List (With Melissa Rich): Is The Party Venue Recession Upon Us?
Culture
Gucci’s Alessandro Michele Era Is Officially Over
Culture
Lindsay Lohan’s New Style Era Is Sweet Redemption