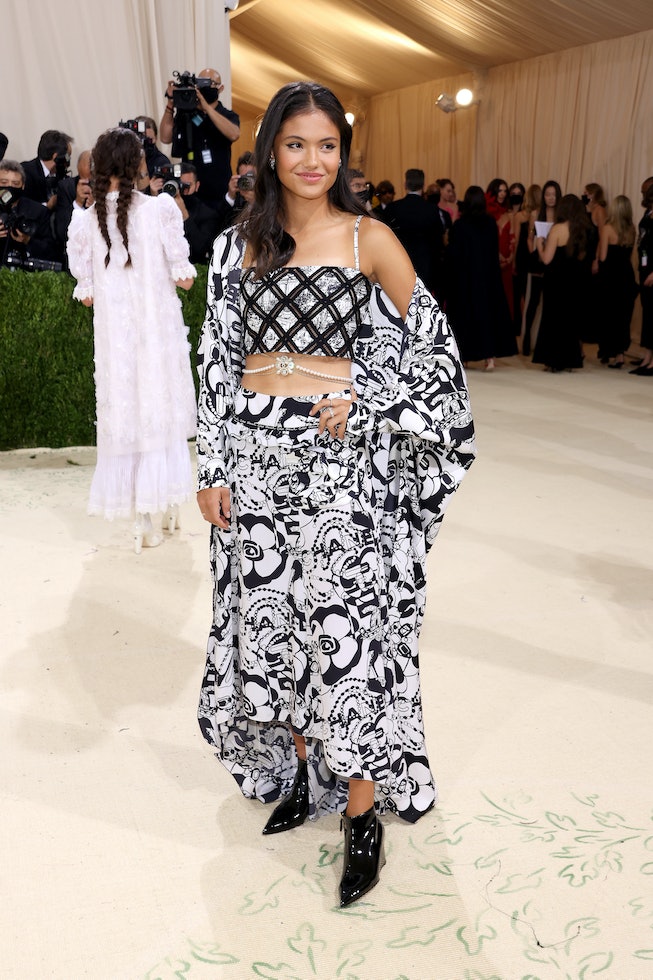 Anna Wintour, avid tennis fan, moves quickly. After winning the U.S. Open championship over the weekend, Emma Raducanu arrived at the 2021 Met Gala on Monday night, marking her debut for the major fashion event. The British athlete wore Chanel on the red carpet; she previously wore a dress from the French fashion house at the 2021 U.S. Open trophy ceremony.

For the Met Gala, 18-year-old Raducanu was dressed in a Chanel look from its Cruise 2022 collection, including a black-and-white printed silk twill top and skirt, as well as a matching coat. Her shoes, belt, bag are also from Chanel.

Raducanu isn’t the only tennis star that’s at the Met Gala. She’s joining Naomi Osaka, who wore Louis Vuitton and is one of the co-chairs of the evening, as well Sloane Stephens (in Aliétte), Maria Sharapova (Gabriela Hearst), and Serena (in Gucci) and Venus (in Prabal Garang) Williams.

Attending the Met Gala just days after garnering global attention for winning the U.S. Open is kind of a big deal, and Raducanu had quite the history-making journey to the top. She’s the first qualifier in either men’s or women’s tennis to make it the finals of a Grand Slam tournament, as well as the first female British player to win a Grand Slam event in 44 years. Her match against 18-year-old Leylah Fernandez from Canada was also the first U.S. Open finals between two teens in more than 20 years.