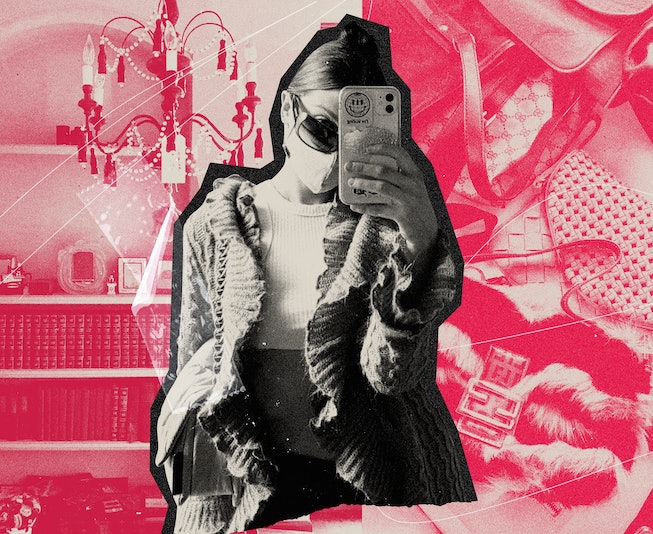 “Look at this living room! This is so iconic,” says Macy Eleni. The TikToker, better known as @blazedandglazed, has become a viral sensation for shopping estate sales across Los Angeles. On a quiet Thursday morning, she’s wandering through a Beverly Hills mansion (which belonged to a former mayor) during a private appointment estate sale before it opens to the public — six bedrooms, seven bathrooms, and nearly 8,000 square feet of property all to herself.

“I’ve got to get some amazing shots of this because it’s always these really grand living rooms that have a cool, quirky edge to them that pick up on TikTok so well,” Eleni excitedly declares, panning her iPhone camera across the room, followed by several photos of vintage furniture and home decor. On top of a pink lacquer and brass side table sits a few pastel-tinted vases, marble bookends, and a glass-blown lamp.

“That’s like every Instagram vibe happening on a table,” notes Eleni. She takes a video of it and beelines to the next room. “Usually I’ll get a bunch of shots so I know I have my entire video, and then I can go about and really shop, shop.”

Eleni, who moved to L.A. about four years ago, has been thrifting her entire life while growing up in Ohio. “I was raised by a single mom, just me, my mom, and my sisters. As I got more aware of fashion in seventh or eighth grade, I was also very aware that my mom couldn't afford to go to the mall and buy the new Hollister and Abercrombie stuff that everyone was wearing back then,” she recalls. Instead, her family often went thrift shopping, which, eventually, fueled Eleni’s interest in fashion.

“It was my escape living in Ohio and not really being around other people that were super into fashion,” she says. “In high school, I constantly wanted to recreate these looks in Teen Vogue and NYLON. And so I would go to the local Salvation Army by my mom's house on Wednesdays when the whole store was half off. I was excited to get my hands on all of these clothing items that were from different time periods and had different stories. It made me feel like I finally found my place in fashion because it's such a place for exploration.”

In L.A., Eleni has taken full advantage of the city's famous vintage stores and markets, “which is really great for people who are just dipping their toes into secondhand clothing and shopping, just because there's so much less to look through,” she says. But over the past two years, she’s found herself exploring nearby neighborhoods and suburbs for more of a hunt and a deal. “I find the best thrifting in L.A. is honestly a 30- to 45-minute drive outside of L.A. I definitely prefer a small town thrift store over a large city any day.”

Around the same time, Eleni started a YouTube channel, regularly posting thrift hauls, “thrift with me” vlogs, and styling tips, along with a few beauty routines, mental health advice, and personal life updates. When California issued a statewide “stay at home” order in March, Eleni had recently moved apartments, hoping to furnish her new home with only secondhand items. She turned to Instagram for inspiration, following a slew of vintage resale accounts. “I realized that a couple of the vintage resellers, furniture-wise, were posting about estate sales,” recalls Eleni. “And one of them just happened to be hosting an estate sale one weekend in June. I literally hadn't been outside of my house in months, so I decided to go see how it was.”

Eleni’s first-ever estate sale was “an amazing '80s time capsule in a humongous, gorgeous house,” she recalls. By July, she joined TikTok to post shorter versions of her thrift store trips (“I was just hitting a wall with YouTube, so I wanted to try something new”). At the end of the month, she uploaded her first estate sale video of a Mediterranean-style home in Hancock Park. “I usually know if it's going to be a good video and other people are going to like it if I'm getting really excited in the moment while making it and I feel like that really picks up in my voiceover,” says Eleni. “I started to get these butterflies in my stomach and I just knew this is a house people are going to love.” The video hit a million views, a TikTok milestone for her. Currently, her page’s top three videos, all totaling more than 1 million views, are of estate sales.

“That obviously showed me that people were excited and interested, but so many of them were just like, ‘What is this? I've never heard of this. You just go in and everything's for sale? I'm so confused,’” she adds. “And I was like, ‘Oh, I had no idea that no one really knew about this.’”

Back at the Beverly Hills mansion, Eleni has moved on to the master bedroom on the second floor. “This is the room. This is the room,” she says, documenting the bed covered with handbags and racks of clothing along the walls via Instagram and saving it to her iPhone’s camera roll. (TikTok doesn’t allow users to save clips unless it’s a video draft.) “This is when I feel like I’m in a giant thrift store — but better.”

Eleni is now sifting through the bedroom’s closet, looking for fun button-downs that she’s coined as “shimmy shake tops.” It’s a catchphrase that you’ll often hear in her videos or see in the comments section from her 222,000 followers.

Over the summer, Eleni, dressed in one of her signature blouses, was approached by a woman at an estate sale in the Hills. “She looked at me and was like, ‘Shimmy, shimmy. Are you her?’ I said, ‘Macy, yes.’ And she was like, ‘Yesterday, a whole gaggle of 16-year-old girls showed up saying they were from TikTok. They wanted to find shimmy shake tops,’” says Eleni. “The woman was so excited because she’s never been able to get people under the age of 30 or 40 to come out to estate sales. That's what I've been hearing from these companies that run the estate sales. They’ve never seen young people think of this as a place where they can go thrift clothes.”

Eleni finds her upcoming estate sale outings on EstateSales.Net, a site (and app) that she often plugs so her TikTok followers can find their own local ones. According to Erica Hendrix, a marketing specialist with EstateSales.Net, there has been an increase in the app’s downloads over the past few months. "While we don't have a presence on TikTok, I personally monitor the conversations around estate sales. I love seeing younger people are considering buying secondhand items before buying from a big box store," says Hendrix. "Our hope is to bring more and more young people to estate sales in their areas and help them see the benefits of buying things secondhand."

Hendrix also notes that the company has been working with millennial-aged influencers to specifically promote its app, one of whom has a large TikTok following. (It was not confirmed whether or not Eleni is one of those influencers.) And while demographic information could not be shared, Hendrix has noticed an increase in younger followers on EstateSales.Net’s Instagram page. On TikTok, videos tagged with #estatesale and #estatesales have garnered more than 36 million views collectively, which hit a notable spike on Sept. 30.

“It's been really fun turning estate sales into a cool fashion shopping experience instead of just going to an old house. It's totally another level of how popular secondhand shopping is right now, which I think is really, really great,” says Eleni. “Especially, to me, thinking about being 16 and how uncool I felt having to thrift my clothing and make all of these outfits. It's really fun to see young people now feeling almost empowered and doing something that's easier and financially accessible to them. I only see it growing from here. Normal retail stores can’t excite me after doing this.”

While a good amount of regular estate sale shoppers are simply gathering inventory for their own businesses, Eleni doesn’t see herself getting into the resale industry. “There are so many people who are amazing at reselling, and I feel like I don’t want to add to it if it’s not my passion,” she says. “I pretty much think of my videos as a mini TV show that I’m trying to make. That’s my goal with this: to create or host my own estate sale show around L.A. or, when COVID is over, around the country.” American Pickers but for Gen Z? We’re into it.