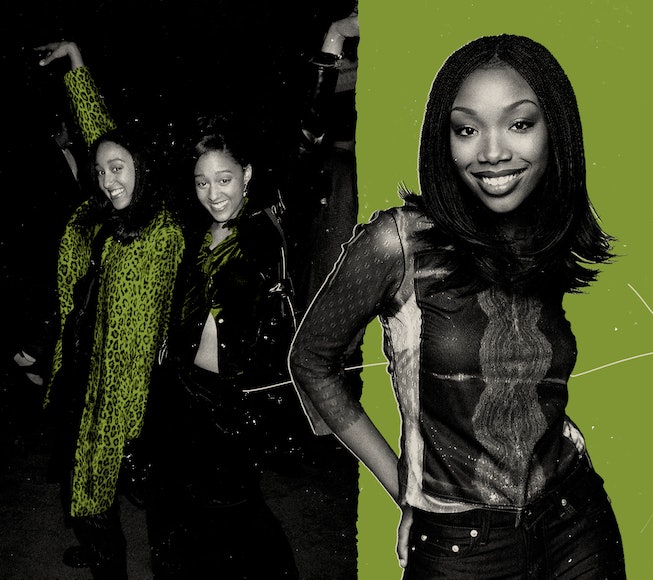 Fabiola Ching is a '90s kid. From the early age of 6 years old, she crafted a fashion personality based on watching Nollywood films daily. As she grew older, her personal style blossomed through the campy world of '90s Black sitcoms.

"The more women I saw on TV who looked like me and who were dressed and styled with enormous versatility, the more that intensified," the 24-year-old tells NYLON.

The Black sitcoms of the '90s were at the forefront of depicting several aesthetics on screen while championing young emerging Black brands, like Akila, FUBU, and Walker Wear, among others. Ching even created an Instagram account titled @BrownstoneArchives as an ode to outfits worn in the shows she grew up watching. Currently, she's documenting the outfits seen on Moesha; before that, it was throwback fit pics from Living Single.

"The comedy is better, and the set design and costuming alike are more impactful and bolder; '90s TV is so illustrative and cartoony! Everybody was dedicated to the play aesthetic, it seems, and I like that," explains Ching.

In July, Netflix's Strong Black Lead shook Black Twitter when it announced that the streaming platform had secured the rights to classic sitcoms like Moesha; Sister, Sister; and Girlfriends. Many rejoiced in the comments section for being able to finally access these beloved television series in better quality than via grainy replicas on YouTube.

While everyone is turning to the comfort of the past right now, there's a reason why people are nostalgic for the '90s. The digital decade ushered in our modern society, from the invention of flip phones to the rise of boy bands, celebrity culture, and R&B. It was the era of romanticizing letting loose and euphoric ignorance.

Though politics and the economy were spiraling, it provoked a generation of attitude and independence, which was often reflected through clothing. The contradicting aesthetics had something for everyone. The bubble-gum glamor girls were dressed in plaid sets, crop tops, slip dresses, and chokers, while the grunge kids opted for baggy pants, flannel shirts, and combat boots. Plus, the streetwear crew showed off oversized sports jerseys, FUBU jeans, Kangol bucket hats, and velour sets. Much of the influential fashion from these '90s Black sitcoms was pioneered by their costume designers and is often used as fashion blueprints today.

When working on Sister, Sister (1994-99), seasoned costume designer Ceci recalls co-stars (and twins) Tia and Tamera Mowry calling her "Ceci-Scissorhands" for making on-the-spot designs. By cropping, cutting, and hand-painting their clothing, Ceci found joy in having the creative freedom in making unique designs that were driven by the script but significant to the characters' identities.

In the show, the identical twins, who found each other in a clothing store, either wore matching outfits or slightly similar items — plaid tights, denim hats, high-waisted pants, and lots of layers — Ceci notes this was intentional. "It was tricky because they are twins. So, you wanted this symbiotic relationship, but you also wanted them to be different," she explains. "I created the similarity by often using the same color palette, but adding something or subtracting from it."

In Moesha (1996-2001), starring R&B singer Brandy as Los Angeles high school student Moesha Mitchell, costume designer Yolanda Braddy crafted the cast's aesthetic based on the script first and her environment second. Braddy would study what teenage students in the L.A. area of Leimert Park (where Moesha was based) were wearing, scouting everywhere from the local mall to the neighborhood's high school. "From there, I put my own twist on the styles that I saw, to create individual characters," she says.

Moesha was a show filled with timeless looks that still gets attention from longtime fans. Ching points out Moesha's Black American Princess aesthetic, pampered with her braids and two-piece sets, as well as best friend Kim Parker (played by Countess Danielle Vaughn) and her '70s-inspired outfits and corsets, often looking like a roller disco queen with hairstyles that make you feel as if you're flipping through glossy pages of Hype Hair. And you can't forget Moesha's stepmother, Dee (Sheryl Lee Ralph), who often wore monochromatic jewel-toned mod suits.

Girlfriends (2000-08), which followed four close girlfriends in L.A., is the refined auntie of Moesha, showcasing the start of early 2000s fashion with plenty of sartorial homages to the '90s: crop tops, animal prints, flared pants, and calf-high boots. Joan, played by Tracee Ellis Ross, was the minimal business-chic girl-on-the-go, and the actor later revealed on Twitter that most of her clothes worn on the show's debut season came from her own closet.

Part of the reason these costume designers had to DIY most of the casts' wardrobes was due to the fact that shows with predominantly Black casts had lower budgets than their white counterparts, which had budgets two to three times larger. "There's a disparity. We are not offered the same chances as these multimillion-dollar movies and high-budget films," says Ceci. "If you don't have the money then you got to get more creative, and still make it work." While Hollywood has had a history of inequality issues from race to gender to pay gaps, the injustices are unfortunately still persistent within the entertainment industry.

Ceci believes the interest in these decades-old Black sitcoms stems from the (still ongoing) demand for diverse content, and the fashion from that genre captured the era's colorful and imaginative silhouettes typically seen within the normal everyday person's wardrobe. Braddy agrees that '90s style had more emphasis on individuality, a sartorial characteristic that's often replicated by young millennials and Gen Z.

"People are rediscovering these shows and the fashion in them. It stands the test of time because it’s excellent work," says Ceci. "It was also a time that I think that, even like today, is not so defined of what's in style and out of style. We applaud people for being unique."