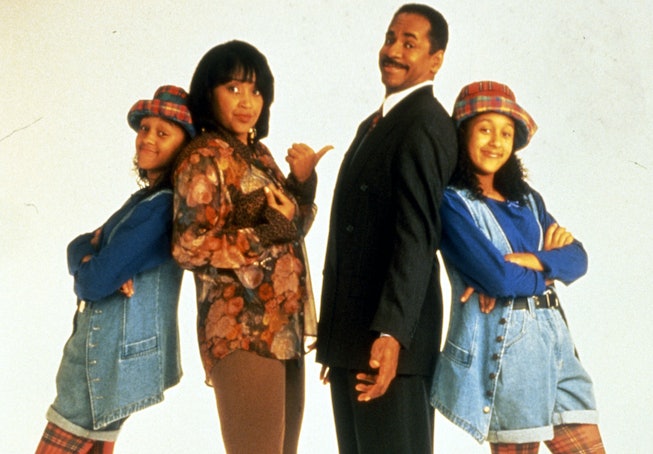 Three weeks ago, after stumbling across a since-disproven rumor that Bravo overlord Andy Cohen had secured Oscar-winning actress Mo'Nique as the newest Real Housewives of Atlanta castmember, I found myself desperately wanting to veg out with some reruns of her early-aughts sitcom The Parkers. Unfortunately, when I looked for it, the best I could find were some low-quality rips that had been illegally uploaded to YouTube. But apparently, the Netflix gods felt my pain because, today, they announced that not only is The Parkers coming to the streaming service in the coming months, but so are six other popular Black sitcoms, including Moesha, The Game, Sister, Sister, Girlfriends, Half & Half, and One on One.

The announcement came via Netflix's Strong Black Lead Twitter account, which regularly spotlights all of the streaming service's Black-specific offerings. "Time to pop bottles," their tweet read. "The following classic shows are coming to Netflix (US)." The seven aforementioned shows are all Black-led sitcoms that ran in the 90s and/or early 2000s and will now be added to the leading streaming service sometime in between August 1st and October 15th.

For those who did not grow up watching these beloved classics, here is a short description of each: Moesha starred singer Brandy as a high school student juggling her social life with her family life. Girlfriends transposed the familiar formula of Sex and the City onto a group of incredibly different Black women, including the always superb Tracee Ellis Ross as the show's center. It eventually birthed the spinoff The Game, which followed the wives and girlfriends of professional football players, one who was played by Tia Mowry, who also starred in Sister, Sister alongside her sister Tamera Mowry as two twins who were separated at birth only to spontaneously reunite later in life and move back in with each other.

A similar vibe runs throughout Half & Half, which follows two estranged half-sisters as they try to forge a sisterly bond as two vastly different adults. One On One tells the story of a former athlete whose easygoing, bachelor-adjacent lifestyle is upended when his ex-wife moves out of the country, leaving him responsible for raising their teenage daughter, who is played by Proud Family's Kyla Pratt. And finally, there's The Parkers, an uproariously funny comedy that stars Mo'Nique as a mother that decides to re-enroll at school...at the same community college where her daughter (played by Countess Vaughn) is currently attending.

Twitter was quick to celebrate the news, with many fans of the sitcoms asking Netflix to consider including other classics like Martin and In Living Color.

It's fantastic that we are finally getting these sitcoms on Netflix, but their 2020 streaming service debuts take on an added resonance when considering how prized similar white sitcoms like Friends, The Office, and Seinfeld have become for whatever streaming service they happen to be streaming on at any given time. While Netflix willingly spent $100 million to keep Friends in its library for one year, many of the most fondly-remembered Black sitcoms (particularly those whose reputations haven't been tainted by disturbing stories about their creators) have long been relegated to television purgatory, only available to watch via syndicated reruns, illegal downloads, or by shelling out an exorbitant amount of money for a DVD boxset. (Also, let's be real, I'm the only millennial alive that even still has a DVD player.)

Anyway, if you need me, I'll be glued to my TV screen for the foreseeable future.

Find a calendar of the new Netflix additions below.

October 15th: One on One