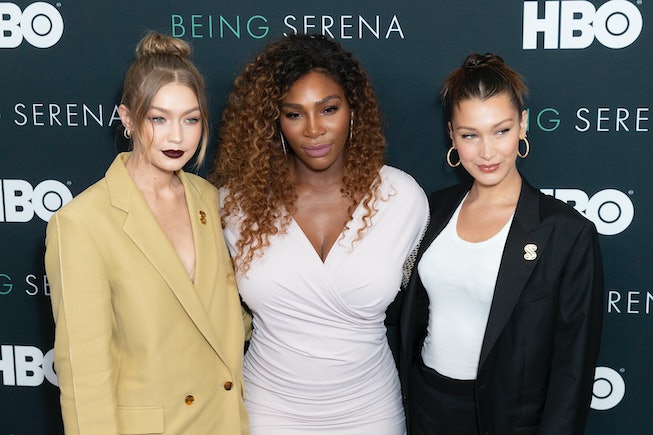 Gigi Hadid may not be able to go to the US Open to cheer on her friend Serena Williams this year, but don't be too sad for the model and world tennis champ just yet: Hadid will team up with Williams to play doubles in a Mario Tennis Aces tournament. The virtual sporting event, titled "Stay at Home Slam," will be hosted by IMG Tennis and Facebook Gaming, taking place on Sunday, May 3 at 4 p.m. ET.

The matches will involve a slew of exciting athlete-celebrity duos, including Hailey Bieber with Naomi Osaka, Karlie Kloss with Maria Sharapova, Taylor Fritz and Addison Rae, and more. While few people would ever stand a chance of beating the likes of Williams or Osaka on a real court, the virtual game has forced everyone onto the same level. If Bella Hadid's recent Instagram is any indication, the Hadids have been going heavy on their Nintendo Switch training, so the Hadid/Williams team is surely the one to beat.

Hadid and Williams have been friends for years, with Hadid showing her support during matches from the stands on numerous occasions. However, Williams is notoriously tight-lipped about her high-profile friendships. So while the world may be hoping the tennis player will share some advice on motherhood with the model, who is reportedly pregnant with her first child, it seems unlikely. Still, it's worth putting out into the universe that we would love to see it. Please don't make me beg, Serena.