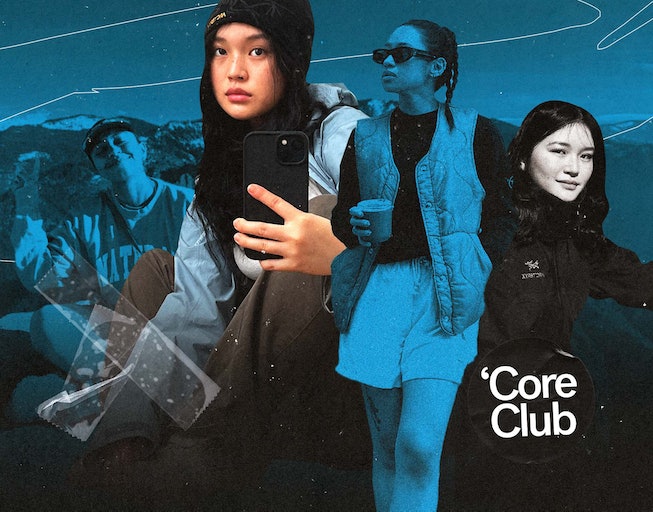 Whether it’s a fashion trend on TikTok or a certain style taking over Instagram, internet aesthetics are always changing. Our series ‘Core Club breaks down the looks that you’re starting to see a lot on social media and highlights the people and brands channeling it best. Next up: gorpcore.

Salomon sneakers and parachute pants are taking flight. As seen on celebrity style stars Hailey Bieber and Bella Hadid, gorpcore is reinventing itself with a younger, more female-focused fanbase. First originating in the menswear space and coined by The Cut in 2017, the aesthetic is inspired by the outdoors and the term itself stands for “Good ol' Raisins and Peanuts.” Think hiking, but make it ‘fit check-worthy. Gorpcore references different elements of camping gear, outerwear, and techwear, all while still maintaining a fashion-forward, trendy relevance. Synonymous with utilitarian vests, trail-friendly shoes, and cargo pants or skirts, gorpcore makes us want to step foot in the great outdoors. Or at least, look like we did.

Although the trend was first popular among men, gorpcore is reaching new heights on TikTok and Pinterest, particularly among Gen-Z women. Swasti Sarna, Global Director of Data Insights at Pinterest, found that searches for gorpcore peaked in June 2022, and are now 17x greater than they were compared to 2021. Not to mention, the trend is almost equally searched among men and women.

Before this year, gorpcore inspiration online was mainly for and by men. But after its recent popularity online, women like Justine Agana can be found on tons of gorpcore moodboards. Because of this, men make up 50% of Agana’s Instagram followers. “It’s cool getting messages [from men] being like, ‘You were my inspiration for the day.’ I see some guys tagging me in their outfit pictures, copying my exact ‘fit that I just wore or wearing something similar,” Agana tells NYLON. The androgyny of gorpcore speaks to its universality and ability to be adapted into anyone’s wardrobe.

Samantha Vaughn has always preferred the baggy silhouette. After spending a lot of time outdoors during her childhood, she naturally dresses for comfort both in nature and her everyday life. “I definitely gravitate towards the more androgynous unisex style. I know girls love their little tops and big pants — I think that's so cute — but in terms of comfort, I'll always prioritize wearing something more utilitarian,” Vaughn tells NYLON. She remembers always wearing “gorpy” clothing as a child, even before she decided to channel the aesthetic.

“I always dressed like a tomboy growing up; I hated wearing dresses, skirts, or any outfit without pants. I think my whole closet was The North Face clearance rack, courtesy of my mom,” recalls Vaughn. “Now, my style is kind of all over the place. I always tend to be wearing at least one item that's comfy. But if it's going to rain, I always bring an Arc'teryx hardshell with me.”

Although outerwear brands like Arc’teryx, Patagonia, and The North Face are popular in the gorpcore community, pieces from these tech-focused brands often come with a high-end price tag. Gorpcore may seem unattainable for this reason, but rest assured you can dress the part without breaking the bank. “Most of these brands have been around for so long that you can find a secondhand version of whatever it is that they're offering for much cheaper,” notes Evelynn Escobar, the founder of Hike Clerb. “There are also things called gear swaps, where people will swap gear with each other and sell it for way less in the community. You can find these groups on Facebook and Instagram, lean into those communities to build up your arsenal of tools.”

Escobar’s massively growing hiking club is dedicated to equipping Black Indigenous Women of Color with the tools, education, resources and experiences they need to collectively heal in nature. Through her own experiences of hiking and camping, Escobar found that BIWOC were often absent in these spaces. Much like in the gorpcore fashion space, women weren’t always at the forefront. Luckily, that seems to be changing over recent years.

Although Escobar favors the gorpcore aesthetic for its practicality while hiking, she says that you don’t have to hike to dress the part. Unlike some aesthetics like balletcore, gorpcore doesn’t gatekeep. Anyone can dress “gorpy,” even if you’ve never stepped foot on a trail in your life. In fact, Escobar often finds herself wearing her hiking pieces on days when she’s not even hiking. It’s more about personal style rather than the clothes’ “intended” purpose. “Gorpcore has gotten so big that it’s transcended the ‘you've never even used your gear’ [mentality] because most of these people have never used their gear. That's the norm. It's beyond even actually going out and camping and doing all that. It's much bigger than that,” Escobar tells NYLON. Even if you’re not a hiker, no one can deny how great comfy clothing feels. And thanks to gorpcore, it looks stylish, too.

Even though gorpcore has grown in recent popularity quickly, it’s here to stay. After all, the “gorpy” aesthetic existed long before TikTok’s Gen Z claimed it. Whether you prefer menswear or womenswear, hiking or watching TikToks inside all day, gorpcore has something to offer you.