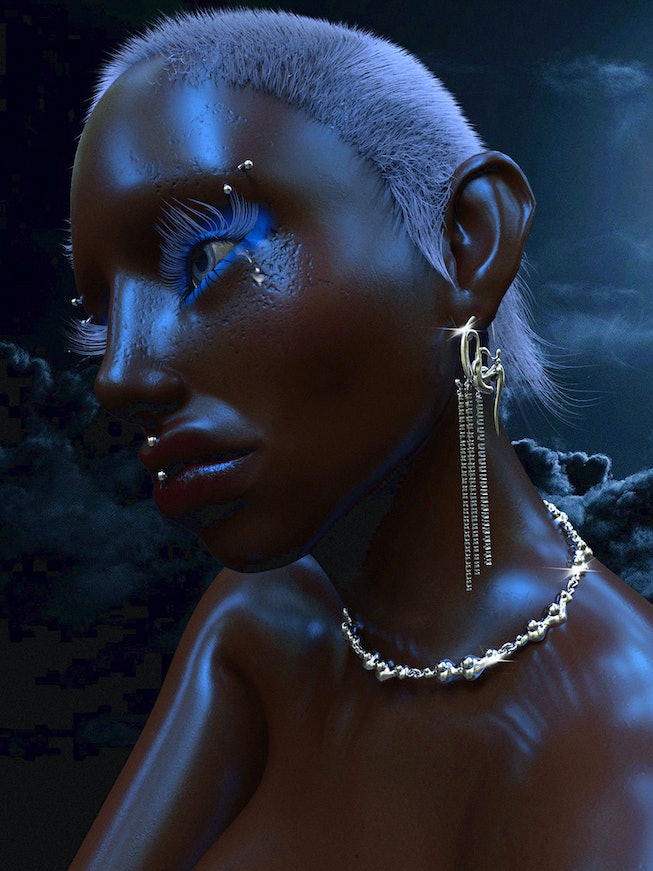 Jewelry is having an existential crisis. We've spent the last five-odd months staring down a pandemic-shaped wormhole that's also on fire, and our earrings, pendants, and rings don't serve the purpose they once did. Yes, our baubles remain relics of our most special memories, affirmations, and manifestations. And yes, they still bring us power and peace when we need them most. But our decorative accessories are not exempt from the changes at play, no matter how precious they are.

This precarious retail landscape may haunt any number of jewelry designers, but not Hannah Jewett. The New York City-based creative has been bracing for the future for as long as she's been crafting her trippy pieces with equal parts modeling technology and traditional silversmithing techniques.

The process is as follows: She first creates pieces with a 3-D-design software called Rhino before 3-D-printing them into plastic models, which she then casts into silver samples. It's a fairly advanced process, but with our "new normal" often requiring immediate and extensive digitalization, it's also a healthy forecast of what jewelry may look like moving forward.

Aesthetically, her jewelry isn't quite like jewelry at all. With squiggly strokes and bulbous angles gracing minimalist silhouettes, Jewett's designs share more artistic DNA with installations you might find at a public sculpture garden than, say, Catbird.

"I studied sculpture and don't have much formal training in jewelry at all, which is why my work sometimes doesn't really look like traditional jewelry," says Jewett, who went to school for visual art. "After I graduated from college, I didn't have a studio space to work in anymore and needed to scale down in size to continue working in a three-dimensional medium. Jewelry was a natural evolution for me and without my background in art, it would look very different and might not even exist."

The figurative lightbulb flicked on when Jewett was working at an architecture studio, making miniature models. With access to new tools like Rhino, Jewett began honing her craft while also sourcing inspiration from everyday materials like acrylics and plastics. Five years later, in 2017, she left her job to launch her label and pursue jewelry design full-time.

Even with ample technological experience, Jewett is still largely self-taught. Though formal training is by no means a requirement, jewelry design is a challenging world to break into, as characterized in any number of those blood-pumping Uncut Gems scenes.

"Being dropped in the middle of New York's Diamond District, trying to figure out the right language for how to produce my work, was very new and difficult to navigate for a little while," she says. "But like anything, you start understanding how things work and you build relationships with people, too."

To do so, Jewett ventured underground, literally. To this day, none of her suppliers are ground-level retail businesses, and production often takes place in studios beneath the street. Once, she even went door-to-door in an attempt to track down a jeweler with whom she had lost touch. He was in what she calls a "nondescript basement" in Chinatown.

"A lot of the best people to work with are our best-kept secrets," she says. "People who start out in this industry sometimes think that finding things is as easy as a Google search and that the first person who comes up is the right one to work with, but that's definitely not the case, in my experience."

Slowly but surely, Jewett assembled her A-team, one wild goose chase through the belly of 47th Street at a time. She's been just as meticulous when building out her roster of wholesale stockists. Her retail partners are an eclectic group, ranging from downtown "it" shops like Kith, Assembly New York, and the now-shuttered Opening Ceremony to the Brooklyn Museum and Radd Lounge, a concept shop in Tokyo's energetic Shibuya district.

"I like that my work can exist in both fashion and the art spaces," she says. "Everyone I've worked with has been willing to take a chance on a fairly new designer doing more experimental work, which is pretty rare in retail these days. When you're selling a product that's not guaranteed to sell and appeal to the masses, you're taking risks. And that's something I've been really grateful for."

Jewett has also found support in a network of celebrity stylists, who have taken a chance on her jewelry-that-doesn't-quite-look-like-jewelry. To date, you may have seen her pieces on the likes of Chloe x Halle, Charli XCX, and Janelle Monae — on her 2018 Rolling Stone cover, no less.

The current health crisis has, obviously, slowed that end of Jewett's business. Though the pandemic rages on, inquiries have recently begun to pick up steam all at once. Suddenly, she says, it's as if "we're back on."

This is where jewelry's existentialist thread weaves back in: Because Jewett conceives of her jewelry designs in Rhino, her entire catalog is available in file format where anyone — retailers, consumers, stylists, whoever — is able to 3-D-print their own plastic models of her designs. And in quarantine, she started getting loan requests for just the files.

"One of them was for Lil Miquela, so that makes sense," she laughs. Another was from 3-D artist Carol Civre, with whom Jewett collaborated on the campaign for her surrealist new collection, Total Meltdown.

Jewett released Total Meltdown back in April, when much of the world was housebound under varying degrees of stay-at-home orders. But with both herself and Civre working in all-virtual mediums, Jewett was able to release a campaign without actually having physical product to show for it.

From top to bottom, Total Meltdown is something out of a 2000-era fever dream. Jewett was already heavily influenced by the blinged-out early-aughts aesthetic in nonpandemic times. (She references 1998's original iMac, a perfect symbol of the fizzy optimism that was so prevalent 20 years ago.) But it was also a time of vast uncertainty, be it Y2K pandemonium or a controversial and chaotic presidential election. In Total Meltdown, that full emotional range is represented in The Sims-like fashion.

"Creative direction is a critical tool for all designers," she says. "Jewelry is a physical product, but your vision tells your story about who you are creatively. It's become apparent to me during quarantine that this is something I can do on my own. I don't need a full photo shoot or a team of people to make this happen."

Jewett has plans to empower her consumers to employ that same autonomy on their side of the transaction. Beyond expanding her digital loan program, she’s also considering augmented reality (AR) as a means for shoppers to try on pieces virtually with their personal devices. Effectively, the filter would live on the brand's individual platforms as a selling tool for remote customers. But it could also be applied to social media platforms like Instagram Stories, Snapchat, and, for as long as we have it, TikTok, which already incorporate such features, potentially boosting in-app conversion rates.

"I'm not seeing it as often as I thought I would given that it's a fairly simple piece of technology to learn or to shop out to someone who knows how to build it," says Jewett. "Retailers have changed so much — the majority of my sales are direct-to-consumer now — so there's not a lot of opportunities for my customers to try my pieces on. That's one tool that could definitely be utilized to our benefit."

To be sure, technologies like AR or 3-D-modeling aren't just bells and whistles that exist only to add cool, quirky selling power to a famously analog category like jewelry. They're investments in an uncharted future that requires us to be more solutions-oriented than ever. So if (and statistically, when) another life-altering crisis comes our way, small-business owners like Jewett can continue doing their jobs.

"This is an opportunity to really reevaluate the way we've been operating," she says. "And things weren't that great before, you know? The fashion industry is notoriously so wasteful. This is a chance to improve what we had before. All designers need to be thinking critically about that."

So what is the meaning of jewelry right now, when we lack both the occasion and the excuse (and surely for some, the motivation) to shimmy on a ring designed to look like slime?

"Now more than ever, we need to appreciate the little things that make us feel good," says Jewett. "One of my friends borrowed a pair of earrings I made to go meet up with her ex-boyfriend, and she was like, 'It made me feel confident. It made me feel powerful.' And that's why I do what I do."