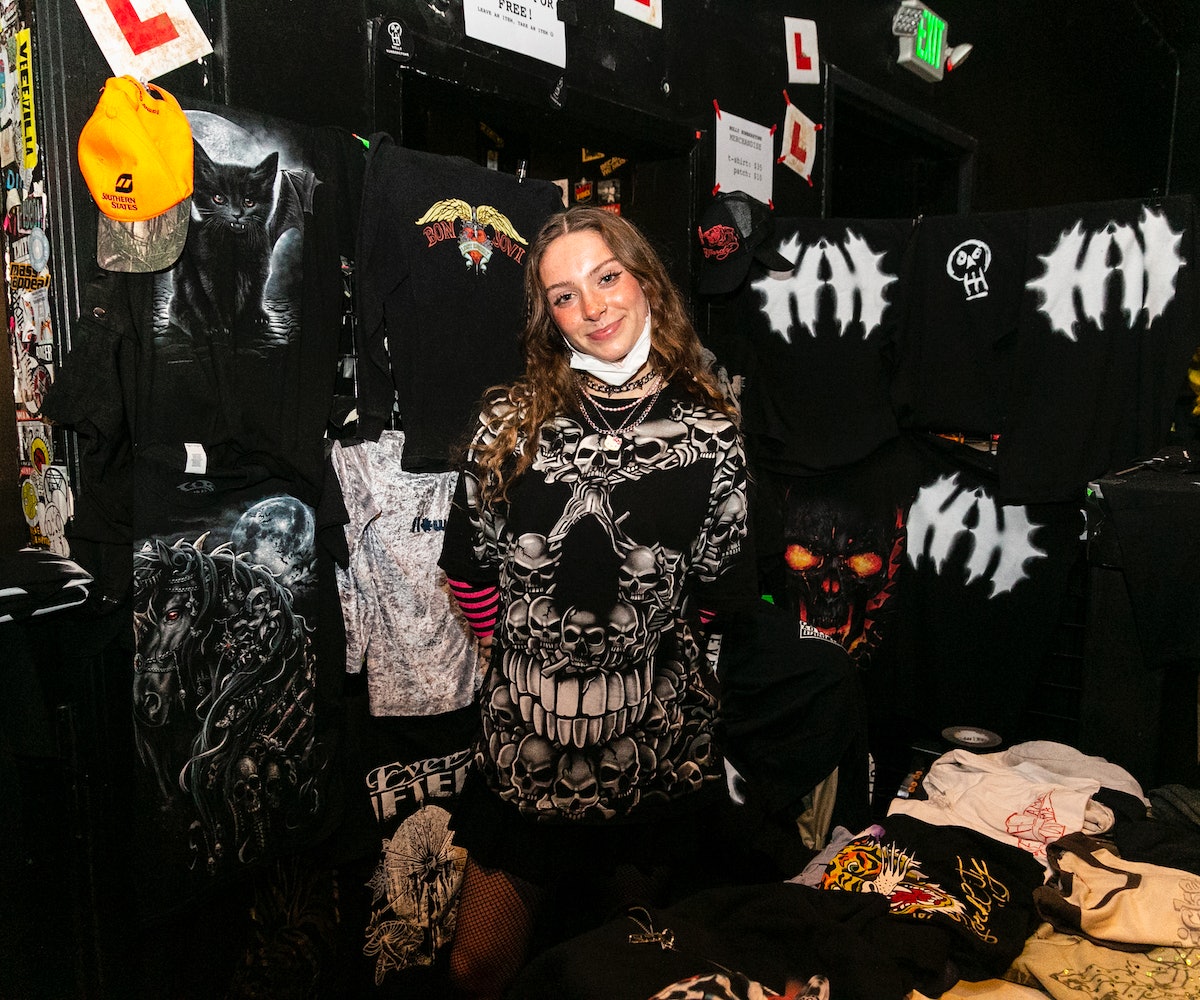 Holly Humberstone’s merch booth looks a little different than usual at The Roxy Theatre in Los Angeles, the first stop of her debut U.S. headlining tour in early October. Surrounding the London-based singer-songwriter’s black graphic tees and patches was a collection of random clothing and accessories: a pair of camo pants, a trucker hat, a few T-shirts with cats on them, and other artists’ merch, too, like Kid Rock and Bon Jovi. The hodgepodge of secondhand finds are part of Humberstone’s Fifth Sister Swap Shop, which she launched in September 2020 as a way to connect with fans while on lockdown.

“I found that I was doing a lot of different shoots or interviews, and I needed new clothes for all of them. But it’s so pointless to get an item of clothing and then wear it once for something and then never wear it again,” recalls Humberstone. “I just thought it would be a really nice way for me to, one, get new clothes that I needed. And then, two, interact with my fans and have some kind of system where we can both have a new item, but you don’t have to go out and buy a fresh, new piece of clothing.”

The name Fifth Sister Swap Shop was inspired by Humberstone’s three sisters and their collective wardrobe. “We share everything and we love shopping sustainably,” she adds. “I pretty much buy all of my clothes from eBay or from charity shops.” She kicked off the idea on social media, posting photos on her Instagram of items she was willing to trade. After getting some offers via DM, Humberstone would pick the item that she liked best. Her first-ever swap was a zip-up black hoodie with a dragon on it, which she traded with a fan from Italy for a big, baggy white hoodie.

“I wore it for a couple of interviews after,” remembers Humberstone. “I’ve done quite a few swaps with different people from around the world.” Once she started performing live again around August 2021 in London, she would host a Fifth Sister Swap outside of the venue — car boot sale style. Now that she’s bringing it Stateside, the shop co-exists alongside her own merch. But what’s more special than, say, a graphic tee with a black cat with bat wings that you snagged at Humberstone’s first L.A. show? Or, in typical L.A. fashion, a hoodie from Ed Hardy.

“It’s so bizarre to me that I can connect with people out here, and there are actual physical people that will pay to come and see me,” says Humberstone about touring in the U.S. “It’s really, really like a weird concept that I can’t get my head around yet. But I’m loving it. Everyone’s so lovely here.”

Humberstone, who grew up in a small English town called Grantham, garnered early buzz from her Glastonbury “BBC Introducing” performance in 2019. At the beginning of 2020, her first two songs — “Deep End” and “Falling Asleep At The Wheel” — were instant hits and drew comparisons to artists like Phoebe Bridgers and Lorde. With the timing of her success, Humberstone joins a special group of artists who experienced their breakout moment at home and mostly online. Even debut performances were likely pre-recorded or done virtually without an actual live audience.

“When I released my first song, we were locked down in the UK like a month after, so I haven’t really experienced a lot of [live performances] when I’ve had music out,” says Humberstone. “I think I’ve been lucky ... because I’ve still been able to work from home and I’ve still been able to release music and have a job and be busy.” She later went on to drop her debut EP Falling Asleep At The Wheel in August 2020, which The New York Times described as “an absorbing affair,” “full of haunted piano and parched indie rock guitar.”

Now, Humberstone is gearing up to release her six-track sophomore EP, titled The Walls Are Way Too Thin, on Nov. 12, along with plans to return to the U.S. to join girl in red on tour in the spring of 2022. “I feel like the first EP and the second EP are very specific timeframes for me. They’re kind of like time capsules,” says Humberstone. While Falling Asleep At The Wheel captured memories around growing up in her childhood home, The Walls Are Way Too Thin reflects on the next transitory phase of her life.

“I left home and then I went to live on my own in London. I didn’t have my friends and family with me, and I didn’t know the area at all. It was just a really weird in-between phase of my life where I feel like loads of people can probably relate,” she explains. “Somewhere between being a child still and feeling kind of immature; you're not really ready for a lot of responsibilities that come with early adulthood.”

The relatability of Humberstone’s work is what draws her fans in most. During her performance at The Roxy, she would introduce each song with a few short descriptions — when your best friend is dating a pretty terrible guy, or helping a loved one who’s going through a rough patch. With every prompt, the crowd would cheer in anticipation, knowing exactly what Humberstone was going to perform next, and sing along to every word, too.

“I feel really lucky and excited,” reflects Humberstone. “And it’s so inspiring, as well, seeing people singing the words. It’s just really nice to even just be in a room full of people who are so happy to be there.”

Holly Humberstone’s sophomore EP The Walls Are Way Too Thin comes out on Friday, Nov. 12.

NEXT UP
Entertainment
Precious Pepala Is Going From TikTok Covers To Her Own Resonant Songs
Entertainment
Olivia Rodrigo Hinted At New Music In 2023
Culture
Not One, But Two BTS Documentaries Are Coming
Entertainment
Spotify Wrapped 2022 Reveals Your Listening Personality Type — And What That Means