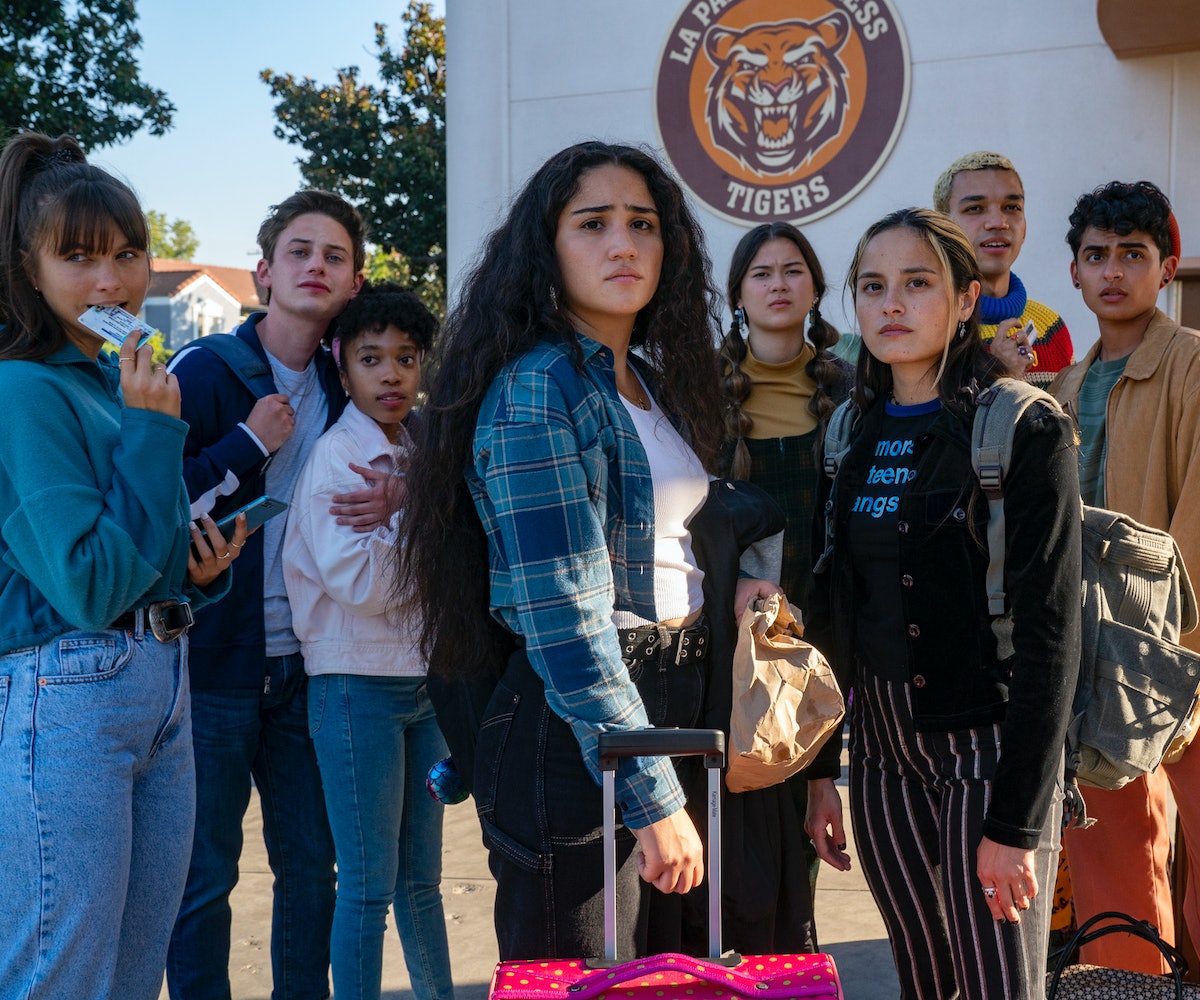 “Fashion on teen shows has a big impact on so many people,” admits Shirley Kurata, the costume designer behind the new HBO Max series Generation, which premieres on Thursday. The show follows a group of high school students from Southern California as they grapple with sexuality, identity, and relationships in an always-connected world. While some teen shows highlight fashion through an aspirational (Gossip Girl) or edgy (Euphoria) lens, Kurata, along with the co-creators 19-year-old Zelda Barnz and her father Daniel, made a point to dress Generation’s cast as realistically as possible.

“I really wanted to make an effort to not be unrealistic and throw them in clothes that they couldn't afford or possibly get,” says Kurata. “It's just suspending that commitment to real teenage life. I think that the Barnzes’ purpose was to show, as much as possible, the world of teenagers, in a real way.”

For Generation, Kurata turned to social media for inspiration. “It’s funny because I primarily use Instagram, and when I was trying to find reference photos of high schoolers in Anaheim or Orange County, I was not having luck with it,” she recalls. “Then I realized, wait, teenagers use YouTube and TikTok. Once I got into looking, there were so many great videos of students interviewing other students and I watched tons of them.” From there, she learned a lot about what they generally wear (“Seven out of 10 kids wear Vans in Orange County,” reveals Kurata) and where they like to shop, including fast-fashion brands, Depop, Etsy, and secondhand stores.

“Zelda, who's part of that Gen-Z world, also gave a lot of input into what she thought, so that was really helpful, as well — to have an actual young adult explain how kids dress these days,” she says.

Generation is still in the process of shooting its last few episodes, which means that Kurata has been working through a pandemic and managing big changes, like accessibility, when it comes to costume designing the cast. “It's been challenging, but at the same time, it's given me a chance to make an effort and reach out to smaller businesses and companies,” she says. “For example, I wanted Greta to wear pieces from Latinx designers, and the same with Chester, dressing him in clothes from Black artists.” She also turned to local shops for sourcing, like resale chain 2nd Street and the famous Slauson Swap Meet.

While most of Kurata’s styling work involves musicians (Tierra Whack), designer lookbooks (Rodarte), and celebrities (formerly Lena Dunham), she actually started her fashion career as a costumer for low-budget TV shows and films. Thanks to Generation (and Dunham, who’s a producer and referred Kurata for the gig), costume design is something that she’s been dipping her feet back into and enjoying, as well.

“What I like about a TV show is you have to build a character and build a closet for them, and there's so many more elements to their personality and psyche. Whereas, when you do styling for a fashion editorial, there's less of that. It's more wanting this person to look fabulous,” she explains.

Ahead, Kurata breaks down how she created each of the characters’ personal styles for Generation.

We first meet Chester, played by Justice Smith, breaking his high school’s dress code for wearing a crop top, which proves just how much he embraces fashion and experiments with his personal style. (Kurata says it was scripted that Chester was wearing a tube top, but instead, they went for a rainbow-colored, overall-style tank.) “Chester would probably shop at Dolls Kill, Depop, he'd thrift,” notes Kurata. “I think he's the type that's really resourceful. He goes through his grandma's closet and borrows some of her clothes. And he shops in the girls’ section of Forever 21 and will tweak something and make it his style. So there were things that were kind of planted within the script. But then I just try to just imagine, ‘What would Chester do?’”

Kurata also made sure to collaborate with Smith on his character’s wardrobe. “When we have the fittings with him, he definitely has a say on what would be good for the scene and if he feels good about [what he’s wearing],” she says. “That's really important because I do really want the actors to feel like it fits their character and that they feel comfortable in it.”

When Kurata was filming the pilot for Generation, it was right around the time VSCO girls were the topic of internet fodder, which inspired her to accessorize Chloe East’s Naomi with wardrobe staples like a Fjällräven backpack and Hydroflask. “Naomi’s a total VSCO girl and Brandy Melville is her go-to brand,” says Kurata, who dressed East in pastel-colored cardigans, white tanks, and blue jeans. For Nathan (Uly Schlesinger), it was more of a classic preppy style. “He’s a poster boy for Polo and Tommy Hilfiger,’” she adds. “And because they’re twins, sometimes as a subconscious thing, they would dress in similar colors or have a palette that's complementary.” Kurata assigned a signature color palette for most of the characters on the show, mostly inspired by each of their homes. Since Nathan and Naomi’s house had white walls and nautical accents, Kurata often chose the color blue for their outfits.

For Arianna, played by Nathanya Alexander, Kurata used a lot of pink, which she notes was inspired by a classmate of Zelda’s who always wore the color, as well. Her style also takes inspiration from the baddie aesthetic. “When I was watching YouTube and the different styles that teenagers wear, there was the baddie, and I thought Arianna was kind of the baddie on the show,” says Kurata. “A little bit of streetwear, but it’s less so because usually those colors are blacks and more edgy, so she’s the pink version of that. It’s her dominant color, but you’ll see her wear other colors further along in the show.”

As Greta (Haley Sanchez) evolves during Generation, so does her style, and Kurata tapped into the character’s hometown skater look to define her wardrobe. “In the beginning, she’s trying to figure out who she is, so I dressed her mostly in skinny jeans, Vans, and a top that you could find at Tilly’s — nothing super standout-ish,” she says. “But as we go further into the episodes and she befriends more people, she starts to gain more confidence and embrace a more masculine, tougher vibe.”

While Kurata looked to Orange County’s skate culture for Greta’s style, she turned to the cool kids of downtown New York when it came to dressing Riley, played by Chase Sui Wonders. “She’s the artsy friend that you would know in school,” says Kurata, naming ‘90s-era Gwen Stefani, X-girl, and Chloë Sevigny as wardrobe muses. She dressed Riley in vintage plaid pants that would hang lower on the hips and pieces from Heaven by Marc Jacobs, which, according to Kurata, was a brand tipped by Wonders. “She actually suggested it and we thought that seemed very Riley, who wants to be the cool New York girl,” she recalls. “We started researching how they dress and it's usually something that's very simple, like a tank top and jeans, but it's the fit and everything else that’s so effortless. It's not too showy, it's more subtle.”

In the first couple of episodes of Generation’s debut season, you don’t see much of Delilah, but when you do, she’s usually making a bold, advocating statement. “She's a social justice warrior,” says Kurata. Her character’s strong mission is reflected in her clothes, too, with pieces that are most likely secondhand or sourced from Crossroads and Etsy. “I don't know how much you'll notice it on the show, but some of the T-shirts that she wears have very political statements, along with buttons and patches and stuff,” adds Kurata. “She really is sincere about her activism. It's not just her trying to be cool.”

Generation is available to stream now on HBO Max.