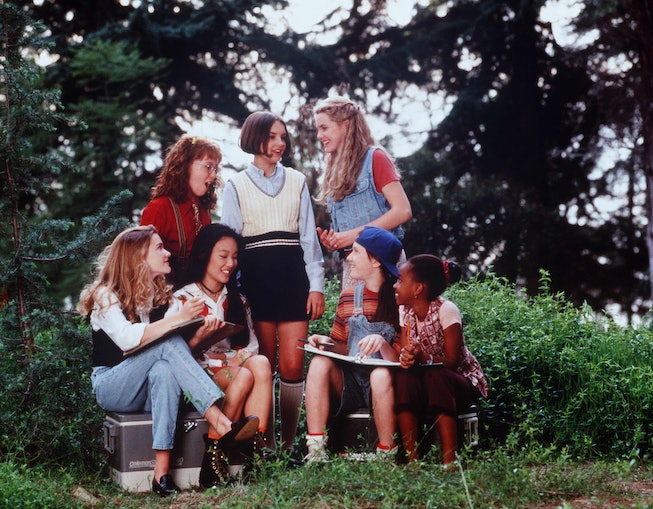 In times of chaos, nostalgia proves particularly comforting. It's no surprise, then, that the new The Baby-Sitters Club show on Netflix is popular now, functioning as a televised balm for women who grew up with Ann M. Martin's iconic book series of the '80s and '90s, as well as introducing the characters to a new generation. The 1995 film adaptation, released right in the middle of BSC-mania, is overflowing with mid-'90s style, an era that many Gen Zers are recreating within their own wardrobes today.

The movie was the directorial debut of actress Melanie Mayron and, amusingly, the cinematography is by Willy Kurant, who previously shot films by Agnès Varda, Jean-Luc Godard, and Orson Welles. So yes, you can say The Baby-Sitters Club is an art film. The series on which the film was based spanned dozens of books and included spinoffs. Watching it long after reading the books, it feels a bit like too many characters are crammed into a short runtime while the importance of fashion comes to the forefront.

Each member of the Baby-Sitters Club — that's Kristy, Mary Anne, Dawn, Claudia, Stacey, Mallory, and Jessi, for those who may have forgotten — has her own look, but as a whole, the BSC unit delivers a cohesive sunny '90s energy familiar to anyone who religiously read teen magazines or idly flipped through the art-and-crafts-filled pages of Klutz books. The girls of the BSC are in middle school and are just starting to come into their own, style-wise. There are elements of the classic tomboy mixed in with more typically girly flourishes.

Kristy (Schuyler Fisk) wears striped shirts, overalls, and baseball caps. Mary Anne (Rachael Leigh Cook, a few years before she cemented her fashionable status in Josie and the Pussycats) has a closet of preppy classics, like shift dresses and Lacoste polo shirts. Claudia (Tricia Joe), the BSC member most often cited as a fashion inspiration, is the artsy one, mixing and matching patterns and textures like a younger version of Rayanne from My So-Called Life. Dawn (Larisa Oleynik) wears a lot of floral prints, while Stacey (Bre Blair) has a soft, slightly bland style. Mallory (Stacy Linn Ramsower) is the Diane Keaton of the group, wearing wire-rimmed glasses, ties, collared shirts, suspenders, and trousers. Jessi (Zelda Harris) wears overalls (there were a lot of overalls in the '90s), or vests in granny-ish patterns.

Flourishes of the grunge style that dominated the early '90s can be found in the Converse sneakers, plaid flannel shirts, and light-wash denim throughout, but the style is overall wholesome and cute, with lots of flowers and friendship bracelets. The more outré stylings of the Spice Girls and Britney Spears hadn't yet hit at the time, and the Baby-Sitters Club's looks feel like a time capsule of a fashion moment when the ruggedness of grunge became more watered down and mingled with the more colorful and feminine vibes of contemporary teen culture.

As is often the case on screen, the mean girls in The Baby-Sitters Club have some of the most on-point, fashion-forward looks. Cokie (Marla Sokoloff) and her friends dress in Clueless-style bright colors and knee socks — they basically look like they could be dELiA's by Dolls Kill-clad influencers. Cokie's floral-patterned tights and lace-up boots remain fashionable, even if we aren't meant to relate to her.

While the new Baby-Sitters Club show is set in the present day, much of the style still alludes to the '90s. Watching the original film in 2020, it's clear they left some of the more outdated '90s looks behind, but many of the playful prints and outfits, which now make as much of an impact on Instagram as they would IRL, still remain relevant today.