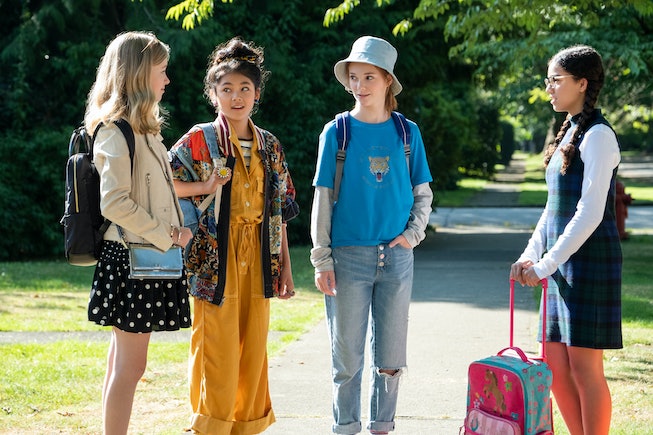 After decades of its influence infiltrating books and movies, The Baby-Sitters Club is back thanks to Netflix. The fictional book series officially got its television treatment with the July 3 premiere of a modernized take on the popular books. First published in 1986, the book's television adaptation features your favorite sitters — and this time, they're ready to take on the world of childcare with a modern-day twist.

Although the team behind this updated tale of friendship promised to stay true to the orignial spirt and story of Ann M. Martin's classic series, there was some updating required, particularly when it came to fashion. Cynthia Summers, the show's costume designer, shared with NYLON that the current trend of 'what was once old is new again' did prove challenging, but the show was able to incorporate a few timeless pieces. "Pieces like hair scrunchies, oversized blazers, and sweatshirts are always in fashion," she said of the styling. "Color, prints and graphic tees from the '90s blended into our current look as well."

To create the looks required of each character, the design team used items from vintage shops, as well as Zara, Topshop, Urban Outfitters, Free People, and American Eagle — no surprises when considering how (and where) Gen-Z shops, despite this being set decades ago. The same idea carried over into the cast's accessories and footwear, where Summers sourced from classic teen brands like Claire's, Nike, Converse, Vans, Keds, and Dr. Martens.

As for the highlight of her job, Summers was especially fond of creating individual looks for each of the five characters. Much of the wardrobe relied on bright colors inspired by pop art and comic books, but each girl was given a signature style.

Much like in the book, Kristy Thomas (Sophia Grace) was given a sporty look, with outfits that she often loaned from her brother's closet, while Claudia Kishi (Momona Tamada) stayed true to her artsy vibe, with outfits intended to look like she repurposed and reused found items, Summers noted. As for Stacey McGill (Shay Rudolph) and Mary-Anne Spier (Malia Baker), their fashion choices proved especially telling of their characters. Stacey, a recent New York City resident, was often outfitted with the latest trends, while Mary-Anne undergoes a preppy makeover that includes the addition of color, prints, and a new hairstyle. Rounding out the group was Dawn Schafer (Xochitl Gomez), who sported a D initial necklace and lots of pieces from Anthropologie to create a "California skater" vibe, Summers said.

While much of the featured fashion is more modern, Summers did reveal one major detail regarding Alicia Silverstone's character, Elizabeth Thomas-Brewer. The first season contains a special wedding episode, and fans of Clueless will want to pay close attention to the outfits. "[There's] a look that is a nod to Silverstone’s character Cher, in Clueless, but Claudia-ized," Summers said. "It is a standout and I can’t wait to see if fans catch it."

Whether you're new to the Baby-Sitters Club world or you're reuniting with some former fictional besties, Summers explained that every fashion choice was purposeful and added to an already adorable story. "The overall intention of the fashion of the show is to evoke time and place in Stoneybrook, Connecticut and create an slightly heightened, hopefully aspirational style and community for middle schoolers to live, thrive and feel free to personally express themselves through fashion," she said.