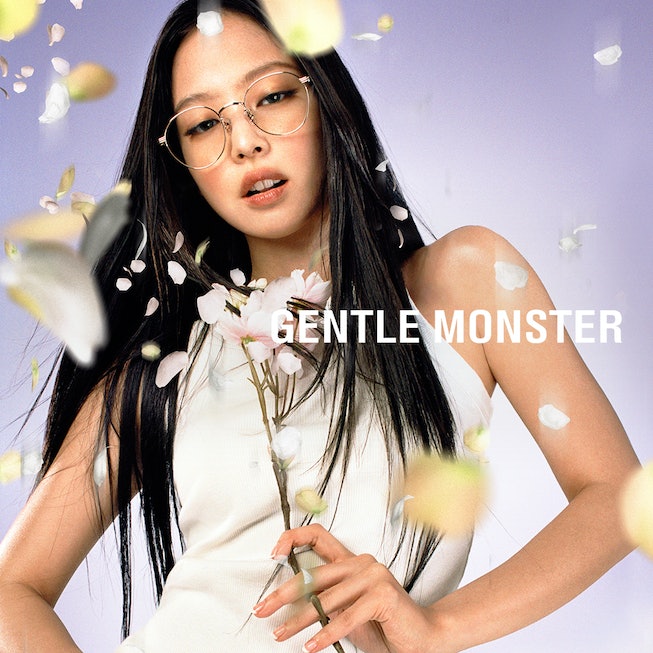 From the airport to the red carpet, Blackpink’s Jennie is known for rocking a classic pair of sunnies just about everywhere she goes. And luckily for fans, you’ll soon be able to shop some of her new favorite styles from none other than Korean brand Gentle Monster, as confirmed by the star in December 2021. Now, the Gentle Monster x Jennie collaboration is upon us, marking the second time the “Solo” singer is teaming up with the eyewear label.

On Thursday, March 10, Gentle Monster officially announced the upcoming collection in partnership with the K-pop star, titled “Jentle Monster.” This comes just months after Jennie teased fans with a sneak peek of the upcoming collaboration in two recent Instagram posts, with the captions, “Did somebody say Jentle Garden? 💐 Coming soon 2022.” In the photos, Jennie is seen wearing a sleek pair of white frames to match her cropped button-up, along with a bouquet of flowers carried inside a cone-shaped bag.

In a newly released series of campaign images, Jennie is seen rocking her Gentle Monster seven-piece eyewear collection, which is set to include a range of coveted and sleek frames you’ll definitely want to cop, from sunglasses to opticals and even a specially-made addition.

Back in April 2020, the Blackpink singer launched her very first collection with Gentle Monster, called “Jentle Home,” which was inspired by her childhood memories. The line sold out almost immediately and featured a total of 15 different pairs of optical frames, sunglasses, and three eyewear chains, with prices ranging between $130 to $260.

Check out everything we know about the upcoming launch, including what to expect and how to shop the highly-anticipated Gentle Monster x Jennie “Jentle Garden” collection, ahead.

When it comes to the collection, the seven-piece eyewear line features reflective metal designs in three optical glasses and three sunglasses. There’s also a special style that comes with embellished crystal detailing around the frame. Aside from the metallic frames, other silhouettes are offered in an oversized square frame in black, brown, and a marble pattern, along with a mini cat-eye design in black, white, and pink. Prices for the “Jentle Monster” collection ranges from $259 through $480.

When and where can I buy Gentle Monster & Jennie’s “Jentle Garden” collection?

The “Jentle Garden” collaboration is is available now exclusively on gentlemonster.com and in select stores around the world, with every purchase sold in a custom special package. (It also sees like Jennie’s fans move fast, as the entire collection is already out of stock, save for a yet-to-be released style.)

Similar to her last collection, there will also be pop-up stores in five select cities around the world, which will recreate a village scenery installation envisioned by Jennie and Gentle Monster, including a pop-up location in Los Angeles on Saturday, March 19. Purchases made at these locations will come in Jennie’s “Fruits of Paradise” packages in limited quantities, along with custom-designed masks and flowers.

You can check out the full campaign for Gentle Monster x Jennie’s “Jentle Monster” collection, lensed by Paris-based photographer Hugo Comte, in more detail, below.

This article was originally published on Dec. 22, 2021