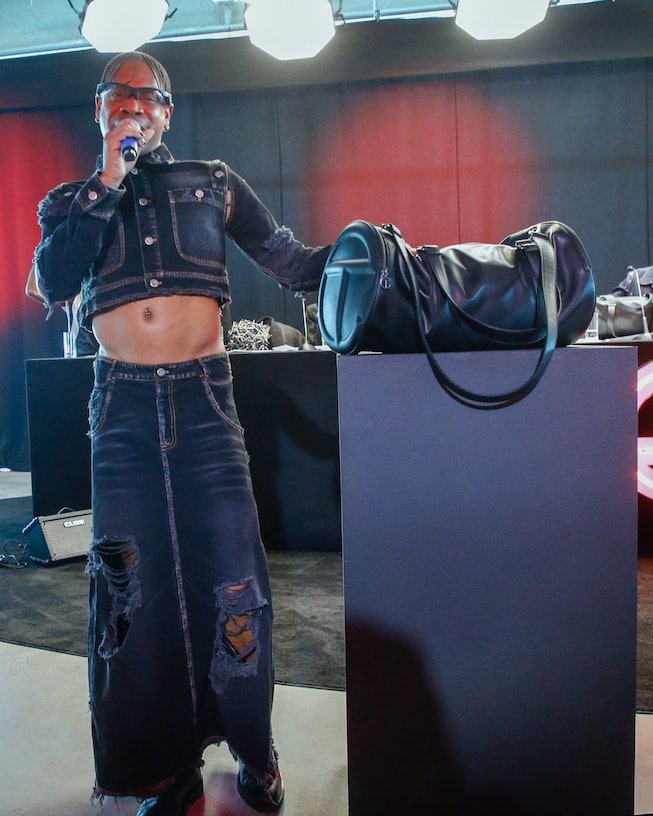 In lieu of a traditional runway show, Telfar used its NYFW calendar spot on Sunday, Sept. 12 to host a press conference at the South Street Seaport. No surprise there, as the brand, fronted by designer Telfar Clemens, is known for its unexpected pivots. Perhaps that’s why Telfar’s latest launch — the Duffle Bag — is going to be the hardest new accessory to cop, following the continued success of its coveted Shopping Bag, also known as the “Bushwick Birkin.”

The announcement was made by Clemens and Telfar’s Creative Director Babak Radboy, who were joined by close friends of the brand, including Ian Isiah, A$AP Ferg, Kandis Williams, Teezo Touchdown, and more. In addition to Telfar’s soon-to-be-hit Duffle Bag, Clemens and Radboy also revealed the launch of Telfar.TV, a 24-hour “public access channel” that will feature videos and submissions (videos, photos, etc.) from the public and the New York label’s tight-knit community.

“There is no content: It’s a capacity to represent and a capacity for community. We’re sick of being other people’s content,” said Williams at the press conference, reported by Vogue.

Telfar.TV will also be the host of some very exclusive brand drops, er, drips. “Telfar.TV will feature the DRIP. A drip is not a drop — a drip is never announced. A drip is bot-free,” according to Telfar’s official announcement via press release. Viewers will only be able to shop exclusive, unannounced Telfar drops on Telfar.TV, including the Duffle Bag (more on that later).

Ahead, find out how you can watch Telfar.TV — and get featured on it — and how you can buy the Telfar Duffle Bag.

Telfar.TV is available to download as an app via Apple TV, Roku, Google Play (but not on its mobile devices), and other streaming services. You can also view Telfar.TV via its official website.

“We are building an ecology between our business and the freedom of this channel,” noted the brand in an official statement. “Our goal is to figure out a way to produce shows, movies, and so on, on the same scale as other networks without requiring the artists we work with to renounce the ownership of their ideas.”

Alongside Telfar.TV is another channel called FTV, launched in partnership with the film collective Ummah Chroma and HBO series Random Acts Of Flyness director Terence Nance.

How to buy the Telfar Duffle Bag:

The Telfar Duffle Bag will only be available to shop through Telfar.TV’s unexpected “drips.” While watching the channel, a QR code will suddenly show up on the screen, which viewers will then take a photo of with their smartphone’s camera and be directed to a website to make a purchase.

“So if 100 people are watching Telfar.TV, we can DRIP 100 bags, and 100% of them get a bag. The drip is for the real ones. The deep cuts we play for those still rocking with us at 6:00 in the morning,” noted the brand in its press release.

When to buy the Telfar Duffle Bag:

The first Telfar’s Drip for its Duffle Bag will happen on Wednesday, Sept. 29, at 12 p.m. EST, totaling three opportunities (or drips) throughout the day. The QR code to purchase the bag, which will be available in small, medium, and large, will be featured on Telfar.TV for one minute until it continues to showcase user-generated videos and photos from its community.

How to be featured on Telfar.TV:

Telfar is already taking video submissions for its 24-hour live-streaming channel on Telfar.TV’s website. You’ll be required to upload your video directly onto the submission form, which will also have you choose from different categories to describe it — “funny,” “hood,” “CGI,” and “hijab,” to name a few — and a sound, like music, audio dialogue, the Telfar Shoutout Song, or no sound or dialog at all. According to the brand’s press release, those who submit a video might even get a bag in the mail, too.

NEXT UP
Fashion
Jimmy Choo’s Collab With Timberland Gives The Classic Boot A Glam Makeover
Culture
An Exhaustive Breakdown Of The Balenciaga Controversy
Culture
Mowalola Teams Up With Bratz For A Daring, High Fashion Collection
Fashion
Reformation & Canada Goose Team Up To Warm You Up

This article was originally published on Sep. 13, 2021