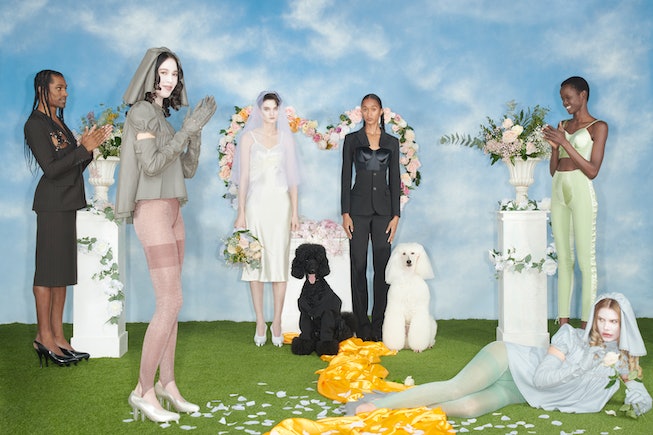 Jean Paul Gaultier’s new collection for its ready-to-wear line is here, and it’s bringing back a throwback goodie: the iconic velvet cone dress from 1984. The brand has been partnering with a rotating roster of designers every season, and for its latest drop, power stylist Lotta Volkova provided her own fresh take on some JPG favorites.

“Discovering Jean Paul Gaultier and Antoine de Caunes presenting their TV show Eurotrash was one of the first memories of fashion for me. What struck me was extreme eccentricity, un-compromising vision, wit, and never-ending festive celebration of fashion, culture, music, and underground cultures that all formed an extraordinary world of Jean Paul Gaultier,” said Volkova in an official statement. “It was an incredible honor to be able to discover the archives, obsess, and fetishize — reimagine the iconic Jean Paul Gaultier collections in the context of 2022 reintroducing them into a contemporary wardrobe.”

This marks Volkova’s second fashion collaboration, after working with Adidas on a collection back in 2020. The stylist first garnered industry attention while working in-house at Vetements, then later teaming up with Demna Gvasalia at Balenciaga. Currently, she’s the sartorial mastermind behind the buzziest looks put together on the runway, including Miu Miu, Blumarine, and 1017 ALYX 9SM.

The collection’s campaign was photographed by Johnny Dufort and stars not only a group of dancers, artists, and athletes modeling the collection, but the imagery pays tribute Volkova’s Instagram-famous poodle Dimitri.

Ahead, we’ve compiled everything you need to know about Lotta Volkova’s ready-to-wear collection in collaboration with Jean Paul Gaultier.

What is the Jean Paul Gaultier x Lotta Volkova collaboration?

The 24-piece collection highlights some of Jean Paul Gaultier’s best and most coveted styles, from its iconic velvet cone dress from 1984 (famously worn by the brand’s longtime muse Tanel Bedrossiantz in the ‘90s), which Volkova modernized in a mini-dress and crop top, to babydoll dresses that call back to Gaultier’s early-aughts designs. Plus, a “naked dress” from Fall 2004 is being produced for the very first time.

When and where can I buy the Jean Paul Gaultier x Lotta Volkova collaboration?

The Jean Paul Gaultier x Lotta Volkova collaboration is available to shop now online and at select boutiques. With products already selling out in certain sizes, we suggest you make a move on a purchase now.