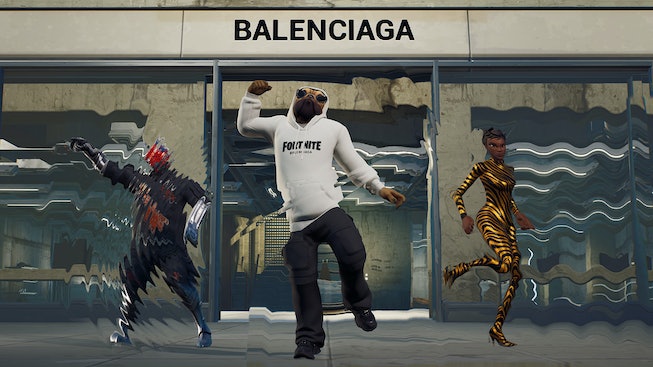 Following Balenciaga’s very own video game release, Afterworld, last year, which debuted the French fashion house’s Fall 2021 collection, creative director Demna Gvasalia teamed up with Epic Games and its Unreal Engine again to collaborate on a special line of in-game outfits, accessories, and sprays for Fortnite, along with actual, physical merch that you can shop and wear IRL. This marks the first time the popular video game has teamed up with a luxury fashion brand.

“We have continued to be inspired by the creativity of Unreal and Fortnite communities. It made total sense, to me, that we collaborate further by creating these authentic Balenciaga looks for Fortnite and a new physical Fortnite clothing series for our stores,” said Gvasalia in an official statement.

The exclusive Balenciaga designs within the Fortnite is the latest addition to fashion and gaming’s massive crossover, which hit its peak over the course of 2020, most likely because of video games’ increasing popularity during lockdowns and quarantines. The relationship between the two has been steadily brewing for some time, but luxury brands seem to be rushing to join the metaverse as of late. In addition to Balenciaga, we’ve seen Louis Vuitton launch a League of Legends capsule collection in partnership with Riot Games and Burberry team up with Twitch to stream its Spring 2021 runway show, as well as Snapchat to create Animal Kingdom, an in-store gamified experience.

Gucci has also gotten in on the action, most recently with Roblox, in which the Italian fashion house built its own “Gucci Garden” that allowed gamers to purchase and wear exclusive Gucci (virtual) items, like a Dionysus bag that somehow made its way onto the Roblox resale market, selling for 350,000 Robux (about $4,115), which is more than the real bag’s retail value of $3,400.

So could a Fortnite-exclusive Balenciaga hoodie resell for well over the price tag of the actual, tangible thing? We wouldn’t be surprised if it does.

Ahead, find out how to buy and wear Balenciaga’s Fortnite collection both within the game and IRL.

When will the Balenciaga x Fortnite digital skins drop?

Fortnite will release its Balenciaga collaboration within the game on Monday, Sept. 20 at 8 p.m. ET. The digital collection includes in-game outfits for four of its characters — Doggo, Ramirez, Knight, and Banshee — as well as back bling backpacks featuring the brand’s logo, a pickaxe shaped like a Speed 3.0 sneaker, an Hourglass bag-style glider, signature wraps, and an emote dubbed “The Look.”

How can you get or buy Balenciaga in Fortnite?

Some Balenciaga products can be unlocked by Fortnite players after performing specific tasks in the game, but others can be purchased using the in-game currency V-Bucks. According to BoF, the most expensive items from the Balenciaga collection cost up to 1,500 V-Bucks, which equals to about $12. Players can buy these cosmetic items via Fortnite’s official in-game storefront or by visiting Balenciaga’s virtual store, called the “Strange Times” hub, in creative mode.

From Sept. 21 at 10 a.m. ET through to 10 a.m. ET on Sept. 28, the “Strange Times” hub will allow users to pick up and change outfits, and have the chance to be featured in the game’s live lookbook campaign. Until Sept. 23 at 12 p.m. ET, virtual billboards will constantly update featuring players’ and their Balenciaga outfits. You can submit and share your images on Twitter by using both the #Fortography and #StrangeTimes hashtags, or adding the “Strange Times” post flair on Reddit.

Plus, players can also perform two Quests with Shady Doggo: posing against graffiti and fetching a pair of Triple S sneakers, which will unlock a free Fashion Doggo Spray and Knight Looks Spray.

How can you buy Balenciaga x Fortnite IRL collection?

If you’d rather spend (way more) real bucks over V-Bucks for the Balenciaga x Fortnite collab, the French fashion house already dropped a limited-edition collection of hoodies, shirts, denim jackets, and caps featuring both of the brands’ logos and various translations of Fortnite’s shopping area, also known as Retail Row in English. The pieces are available on Balenciaga’s website and in stores and range in price from $395 for the cap and $1,290 for the denim jacket. Though, you may have better luck copping pieces in the game instead, as most of the IRL collection is already selling out.