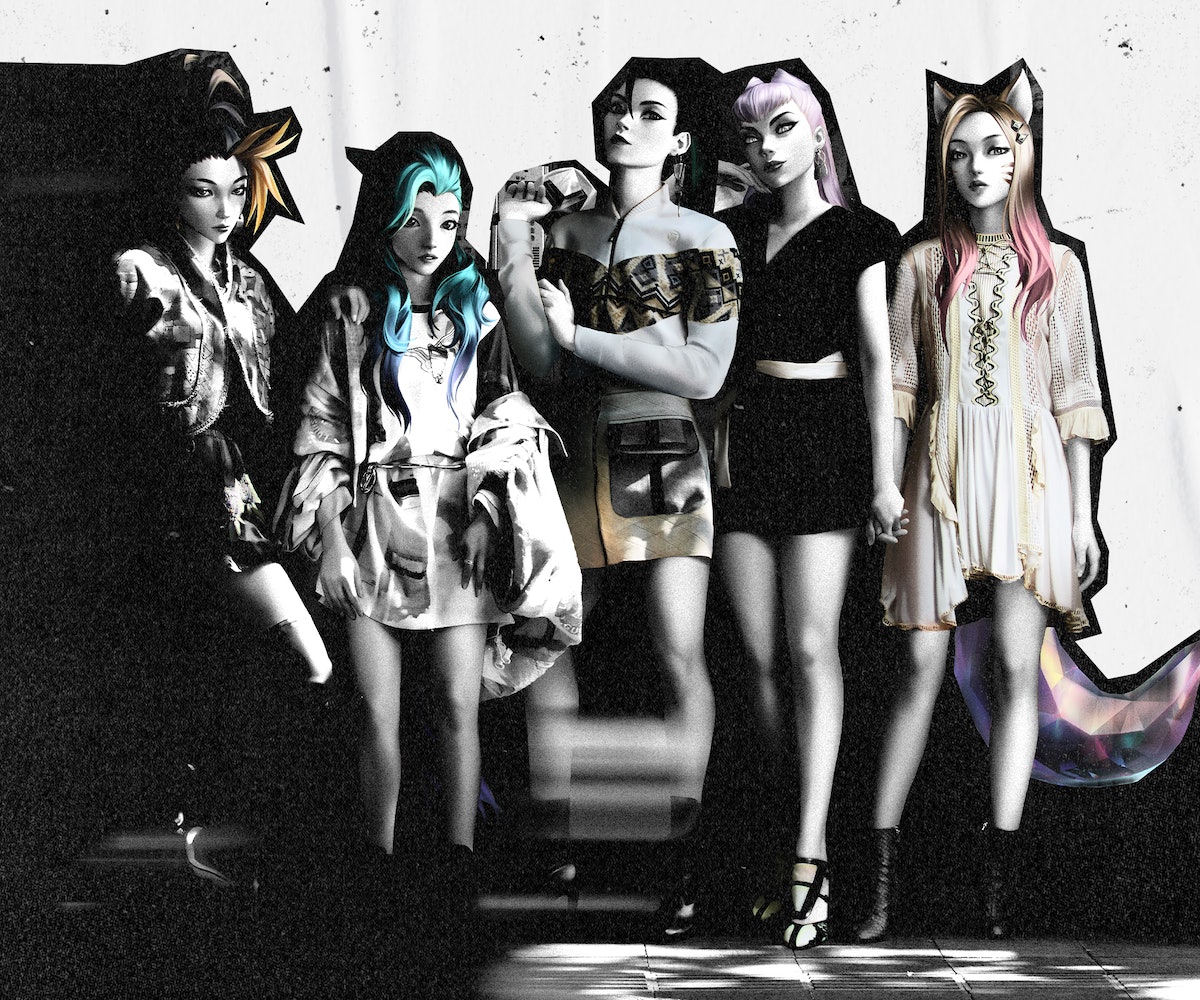 Last week, powerhouse Balenciaga announced it would present its Fall 2021 collection by video game. Afterworld: The Age of Tomorrow will debut this week, on Dec. 6, and imagines the world in 2031. An allegorical adventure inspired by "human destiny," the Kering-owned brand is using leading photogrammetry to create the new collection and the future in which it's intended to be worn.

The move comes at a peak time in the crossover between gaming and fashion, a relationship that has been steadily brewing for some time.

It might surprise you to know that Animal Crossing, the Nintendo-created game for which designer brands Marc Jacobs and Valentino created "New Horizons" looks back in May, originally launched in 2001. And not this year as it might have easily been assumed given the game's popularity during lockdown – when Instagram accounts like Animal Crossing Fashion Archive, Nook street Market, and Animalcrossfits became a craze. But, arguably, 2020 has been the year of fashion and gaming. And it's a far cry from just picking the color of your shirt in Cool Boarders 2.

Last year, Louis Vuitton launched its League of Legends capsule collection in partnership with Riot Games; Gucci unveiled a series of new app features including the Arcade App, inviting customers to play with popular house motifs and characters, plus AR technology that allows them to virtually "try on" sneakers and watches. This year, the Italian brand launched a collaboration with The Sims and a tennis-themed outfit game, Tennis Clash.

Meanwhile, Burberry teamed up with Snapchat to create Animal Kingdom, an in-store gamified experience in which Snapcodes transport shoppers to a Burberry world. And Ralph Lauren, too, collaborated with the social media platform — to create virtual clothing for personal Bitmojis. We've been introduced to the digital fashion houses the Fabricant and Carlings, and even Hedi Slimane at Celine has found the TikTok generation rubbing off on him per his recent menswear collection, titled "The Dancing Kid," a nod to the platform's dance-heavy content.

"With confinement, we started the year 2020 to wake up into 2025," describes Christian Louboutin of such acceleration. "I'm not a gamer myself — I can barely switch on the TV — but I've observed in the last few years more and more people, especially at the airport or in planes, playing on their phones." In October, the footwear designer showcased his Spring 2021 collection via the app Zepeto, enabling users — not just fashion press and buyers — to create personal avatars and discover new-season shoes.

"Our social lives are now predominantly playing out online. Therefore, our main channel to present ourselves and shape out identity is digital," says Rachael Stott, futures analyst at strategic foresight consultancy the Future Laboratory, which estimates that when it comes to in-game spending, U.S. gamers spend on average $229 on digital purchases each. For comparison's sake, the new standalone XBox Series X and Sony PlayStation 5 both retail for $499.

According to the trend forecasting agency WGSN, gaming has an estimated global reach of 2.7 billion; and skins, virtual items that change the look of a character, accounted for 80% of the $120 billion spent on digital games in 2019.

"Fashion working with gaming is kind of the next obvious step in the evolution of fashion," says Erin Wayne, head of community and creator marketing at Twitch. The livestreaming platform launched in 2011 and now boasts 26.5 million daily visitors. In September, the British heritage brand Burberry became the first luxury fashion label to partner with the service and stream its Spring 2021 show, and in July, the UK-based university Ravensbourne streamed its graduating fashion students' collections, which had been presented via a digital avatar project.

"The avatar project and Twitch stream was about up-skilling students in new digital and promotional technologies," says Ravensbourne Associate Senior Lecturer Adam Andrascik, who spearheaded the project. "In a time when the future of the industry was uncertain and physical shows had been canceled."

Burberry had begun talks with Twitch at the end of last year, pre-pandemic, about how the two could work together and tap into a new audience. "Once COVID was in play and the world by necessity moved to virtual community experiences, the existing idea of putting on a virtual luxury fashion show became a reality," says Adam Harris, global head of brand partnership studio at Twitch. "The varied interest of our highly engaged community has long made Twitch the perfect place for the luxury sector." As has its sense of authenticity.

"Gen Zers are digital natives. They don't want content pushed at them," says Harris. On Twitch, you can find anything from cats sleeping to ASMR to gaming to chatting. Instead they'll seek it out, per Fortnite's Travis Scott spectacular in April: 12 million players logged into the concert. Meanwhile, Lil Nas X's recent stint on gaming platform Roblox drew 33 million views.

"Fashion brands are primarily infiltrating gaming as a marketing tool," points out Stott. With doors to physical stores shuttered, gaming devices have the potential to build communities. "Spending hours crafting a digital replica to show your peers currently makes sense," she says.

Lucy Yeomans, a former magazine editor-in-chief and now the founder of Drest, originally came up with the idea for her interactive styling game, which currently carries more than 200 brands, around 2010. It was around the time of The September Issue, reality fashion TV, social media, and an overall move toward democratizing fashion. "I was starting to find gaming infiltrate areas of my life, like Facebook," she recalls. "I was thinking wouldn’t it be amazing if I could give people access to everything I have in my palette: editors, models, locations… How do we engage with this amazing audience, these next generations coming up?"

Circa 2010, she admits that fashion wasn't yet ready for gaming (neither was the technology), but when Drest launched at the end of 2019, it was — and chimed with a new interest in sustainability spurred on by the rise of a wear-once, fast-fashion culture that came before it. "[How] can you let people scratch that itch virtually?" Yeomans wondered.

The same sentiment kickstarted L.A.-based DressX into action. Founders Daria Shapovalova and Natalia Modenova had been looking for a new idea, feeling fashion weeks to no longer be relevant as a medium given the rise of social media. Their retail platform for digital fashion, with a foot in sustainable thinking, was born. A roster of just over 30 brands, mostly URL only, some IRL, too, sell for between $25 and $200. "It's like digital couture," says Modenova. Already the pair say they have returning customers of a broad age range, keen to snap up the latest digital fashions.

Why buy something, though, when you can't physically wear it? That was the big question in 2019 when fashion house The Fabricant sold a digital dress for an eye-watering £7,500 (about $10,000).

"If you define a luxury good as something you don't need anyway, I feel like it has much the same appeal," says Alexander Knight, a Ravensbourne graduate who was part of the digital avatar project and is now successfully working in digital fashion design. Aside from "looking really cool," Knight explains, skins have "a storytelling element" or "a fantasy that resonates with you." Just as real clothes might do. To date, Knight has 43 skins, the most expensive costing £20 (about $27), and having first acquired them back in 2013.

"Having 3-D avatars that can be dressed and animated creates an exciting opportunity for fashion designers," says Michael Ferraro, executive director of the FIT Design and Technology Lab, where virtual fashion prototyping has been explored for the past two years. He says 3-D virtual prototyping allows designers to drape, fit, and modify with a quick revision process. "Without the need for the wasteful and time-consuming process of making garments."

It also extends the possibilities of design: new colors that can't be achieved or imagined in reality; fabrications that aren't limited by physics — a huge draw. After all, as Twitch's Harris puts it: "Fashion is about pioneering, expressionism, and storytelling."

Even before there were such possibilities, the gaming world has influenced designers. Nicolas Ghesquière's Spring 2016 Louis Vuitton collection drew on his love for cyber and sci-fi, which he also explored during his Balenciaga days. Now, Louis Vuitton has joined the esports world, teaming up with League of Legends and designing the trophy travel case for the Summoner's Cup and dressing the game's virtual pop group K/DA. South Korean brand Munn showcased a recent collection at Seoul Fashion Week inspired by (all too appropriately) the immersive film Ready Player One. "I used a lot of hardware to remind people of robot animation; styled models to hide their facial features to recreate a virtual reality," says the designer Hyun-Min Han.

It's not just avatars and skins to consider from the gaming world; it's esportswear, essentially the new sportswear: the clothes you wear to play. Notably, David Beckham is a founding shareholder in the online gaming firm Guild Esports, and Public School's Maxwell Osborne was hired as the creative director of multi-franchise esports organization Andbox to create a special capsule collection.

London-based esports company Fnatic specializes in performance apparel, extending beyond hardware accessories. Sleeves that don't catch on the keyboard, for example. "We look at what do gamers need?" says Simon Brown, product director, who joined the team a year and a half ago and has since noticed a surge of interest in the category. The brand partnered with Gucci in June to create a Dive watch to celebrate the spirit of gaming. "Gaming is starting to become such a cultural force. Our mission is to become one of those brands like the Dickies [of the world] or whoever was at the beginning of that culture," he says.

When Twitch launched merch in 2015 it was a sell-out success. "Gaming has always been this giant subculture throughout the years," says Tyler Morten, director of brand experience at Twitch, likening it to skateboarding or snowboarding. Hoodies are especially popular. Since then "standard apparel tech," aka athletic-style fabrics with taped seams, has been introduced to cater more to streamer needs.

The meteoric rise of the fashion and gaming category, from skins to avatars and apparel, is perhaps best summed up, so Fnatic's Brown describes, as being "like a strange reality but it is a reality."

NEXT UP
Fashion
Cybercore Is The Next Tech-Inspired, Y2K Fashion Aesthetic Trend
Fashion
The Best Street Style Moments From Afterpay Australian Fashion Week 2022
Fashion
Jacquemus Is Nike’s Next Designer Collaboration
Fashion
Behind The Fashion And Beauty Of Gregg Araki’s Nowhere, 25 Years Later