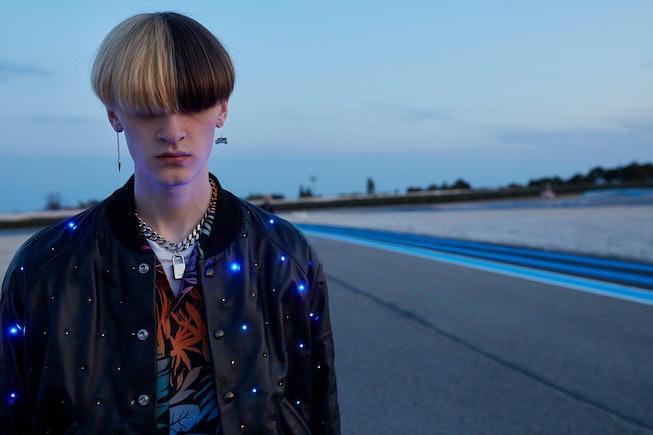 Hedi Slimane is really doubling down on TikTok for fashion inspiration. The creative director presented Celine's Spring 2021 men's runway show on Wednesday, which was filmed at Circuit du Castellet, a motorsport race track in France. Titled "The Dancing Kid," the new collection is a sartorial homage to TikTok's eboys and today's youth culture.

"'The Dancing Kid' is a 'documentary' collection spanning eboys and current skate culture," according to Celine's show notes. "A candid portrait of a generation that took advantage of the confinement and isolation to assert itself and emancipate itself creatively, spontaneously inventing an initiatory language anchored in dance and teen romance."

Each runway look was made to stand out online, including embellished jackets with sequins and LED lights (a nod to TikTok bedroom decor), slouchy patterned knits, statement pants ("Perhaps" in sequins by artist Jesse Harris covers the crotch of a pair of sweatshorts), and plenty of silver chain necklaces and dangly earrings.

Slimane is one of the few luxury designers that have truly tapped into TikTok to garner Gen Z's attention. In December 2019, he hired Noen Eubanks, the internet's residential eboy, as the new face of Celine. Though, Eubanks once noted in an interview with The Face that he had no idea what Celine was when he was booked for the major fashion gig. Plus, the woman who scouted him wasn't aware of Eubanks' online celebrity.

Regardless, Celine is still taking advantage of the popular social media platform. For the Spring 2021 runway show, Slimane hired rapper-songwriter Tiagz, whose claim to fame is, you guessed it, going viral on TikTok, to soundtrack the runway show with an original edit of his hit "They Call Me Tiago." (If the artist's name doesn't ring a bell, then his sound-turned-TikTok challenge "My Heart Went Oops" probably does.)

And ahead of Wednesday's show, the French luxury house hired a few of TikTok's favorite eboys to help promote "The Dancing Kid." On Tuesday, Chase Hudson (@lilhuddy), Anthony Reeves (@luvanthony), Curtis Roach (@curtisroach), and, of course, Eubanks (@noeneubanks) posted videos for their millions of followers to catch the show's livestream on TikTok. Eubanks even wore a full look straight from Celine's latest collection.