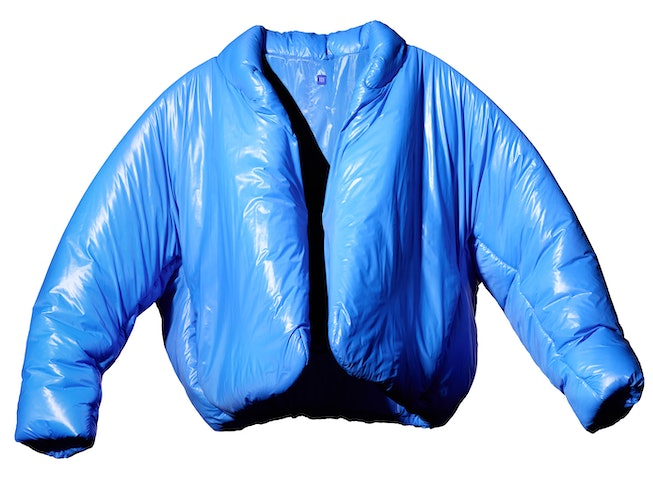 The first piece from Yeezy Gap, Kanye West’s 10-year partnership with the American retail brand is available to purchase... like, right now. On Tuesday, the recycled nylon Yeezy Gap Round Jacket made its surprise debut, and is up for pre-order for the price of $200. Gap has even wiped out its entire Instagram feed, leaving it with just one photo of the new jacket.

On Gap’s website, shoppers who want to cop the release are prompted to enter their name, email, phone number, and a variety of clothing sizes before sending them into a “waiting room” to purchase — most likely in an effort to to avoid online bots.

The listed estimated ship date for these pre-ordered items is October 14, 2021, just in time for fall, and it’s reported that buyers will not be charged until the jacket actually ships. As of June 7, the jacket is also on display (as a floating projection) at select locations in New York City, Los Angeles, and Chicago.

Yeezy and Gap announced their partnership last June, with an expected launch of June 2021. The two plan to release apparel for women, men, and children over the course of their 10-year deal. “We are excited to welcome Kanye back to the Gap family as a creative visionary, building on the aesthetic and success of his Yeezy brand and together defining a next-level retail partnership,” said Mark Breitbard, Global Head of Gap Brand, in an official statement last year.

The ongoing collaboration didn’t happen without some controversy. After announcing its partnership with Yeezy, Gap’s collaboration with Telfar, which had been announced in early 2020, came into question. Gap later confirmed it had axed the deal with Telfar, though it still planned to pay the brand.

Head over to Gap’s website to pre-order Yeezy’s Round Jacket now, and see the item in detail, below.