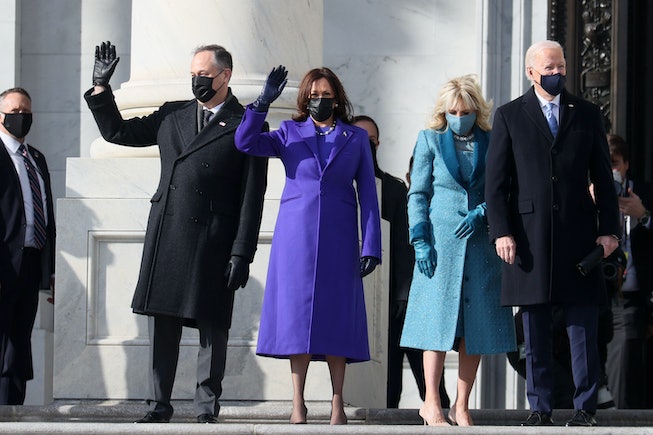 It's officially Kamala Harris' first day in office as the first woman Vice President of the United States, and the new Veep is already sending a strong message with her fashion choices. For Wednesday's inauguration, Harris is showcasing two Black American designers, Christopher John Rogers and Sergio Hudson.

She wore a purple coat and dress from Rogers, according to a Harris aide, to the Cathedral of St. Matthew the Apostle in the morning and later to the inauguration ceremony. Purple was the color of choice for Hillary Clinton after her loss during the 2016 election, wearing the color for her concession speech and even Wednesday's inauguration, in what was interpreted as a nod to bipartisanship and unity. Later in the evening, Harris changed into a Sergio Hudson look, including a sequin cocktail dress with a floor-length silk tuxedo overcoat.

"We kept the silhouette very structured and tailored, because that's who the Vice President is," Hudson told Harper's Bazaar in an interview. "But the liquid sequins give her glamour and shine, because her influence and the way she’s broken barriers is a light for so many of us. She shines so we can all shine."

Harris' inauguration wardrobe has been made up exclusively of Black American designers. On Tuesday night, she joined her husband, along with Joe and Jill Biden, at the COVID memorial on the National Mall wearing a tan coat from Pyer Moss. In March, the brand had transformed its New York studio into a donation center, collecting medical supplies and PPE for hospitals and healthcare workers. Founder and creative director Kerby Jean-Raymond also set aside thousands of dollars to give to struggling minority- and women-owned small creative businesses.

Check out Harris' inauguration looks, below.