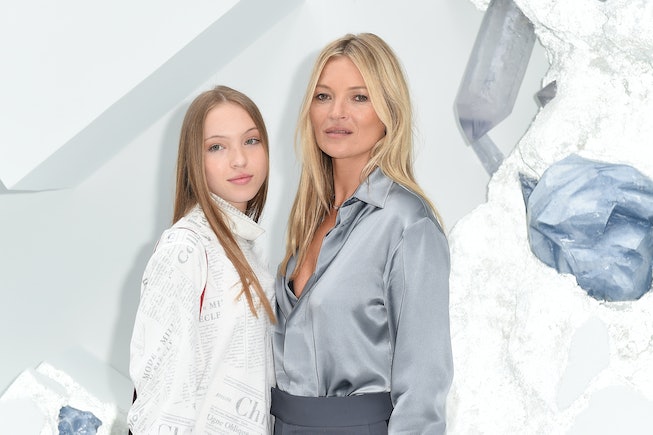 It was a mother-daughter affair at Fendi's Spring 2021 couture show. Kate Moss and her daughter Lila both walked runway in Paris on Wednesday for Kim Jones' debut for the French fashion house. The milestone occasion brought on a slew of the designer's closest model friends, with Naomi Campbell, Cara Delevingne, and Christy Turlington making their return to the runway, as well.

Fendi's couture show marked the 18-year-old newbie model's second time walking the runway. Lila made her fashion week debut last October during Miu Miu's Spring 2021 show, having starred in the her first-ever ad campaign for the brand the previous year.

"It was so emotional seeing Lila on the runway," Kate shared in a video for British Vogue. "Well, it wasn't emotional — I was really nervous for her. I was sitting around the kitchen table…Some girlfriends [were there] and we were waiting for the show to start on the link. When she came out we were like, 'She's doing it! She's doing it!' Yeah, I was really proud."

The younger Moss is quickly making her mark on the fashion industry. Last month, she landed her first-ever Vogue cover, posing for the December 2019 issue of Italian Vogue.

Check out Lila and Kate on the runway at Fendi's couture show, below, along with Campbell, Delevingne, and Turlington, too.