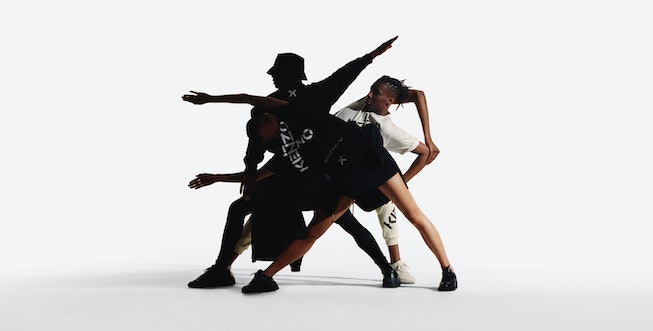 Kenzo Creative Director Felipe Oliveira Baptista, who stepped down from his role at Lacoste in 2019 to take on the top role after Carol Lim and Humberto Leon's departure, is making more moves for the French fashion house. Following his first-ever brand partnership with Vans, Baptista launched a new in-house line Kenzo Sport on Friday.

The activewear brand for men and women combines technical materials with comfortable-meets-functional silhouettes, like sweatsuits, mesh T-shirts, and high-waisted leggings. Each item is adorned with a new logo from Kenzo, which shows the brand's name shaped into an "X." More styles are expected to drop throughout the season, including outerwear, skirts, dresses, and accessories (bucket hats, clout packs, and small crossbody bags).

At Baptista's debut runway show earlier this year, not a single sneaker was spotted in his collection, but it seems like the designer has changed his mind on the athletic footwear choice. With Kenzo Sport, he created two sneaker styles for the first drop: "Sport Wave" mesh sneakers with elastic laces, a pull tab in the front, and textured rubber soles for, as well as a more streamlined, versatile "Kourt K Logo" sneakers to wear outside of your regular workout routines.

See more of Kenzo Sport's campaign, below, and shop the collection now online at kenzo.com.