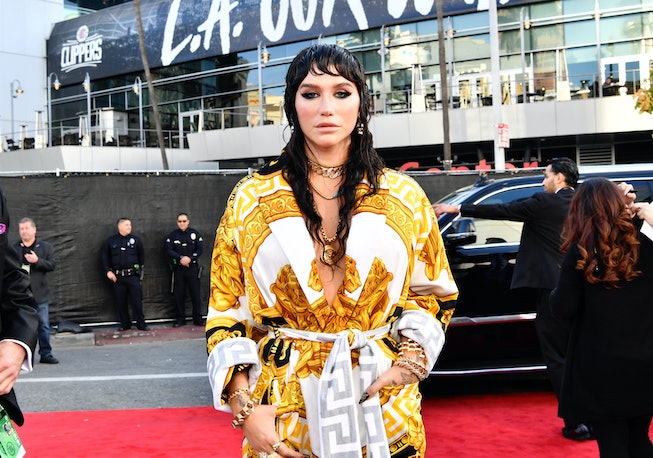 A chance, socially-distanced exchange led Kesha to her latest fashion collab. While wearing a mask and standing six feet away, the singer spotted a woman wearing a chunky gold mask chain. After shouting to ask where she got it, she learned it was Pretty Connected, the brand that went viral for its versatile chain accessories. Kesha is selective when it comes to her collaborations, but she decided to reach out to Pretty Connected founder Lara Eurdolian.

“I just thought, ‘Why not? Why not do a collaboration with something that I’m an avid user of and think is really cute that has connected me during this time?’” Kesha tells NYLON. “I kept my mask around my neck, which I tend to lose things relatively easily, so that was really helpful, and also to collaborate with a smaller woman-run business, it was all a win-win.”

Kesha’s Pretty Connected collection, which drops on June 18 on the brand’s website, includes two new versions of its most popular chain styles, the Nikki and Rindi, featuring a separate limited-edition charm with the Yin and Yang symbol.

“During this time I had a lot of anxiety come and go. I kind of spoke to the universe or prayed, or whatever you want to call it, and asked for just a symbol of assurance that everything's going to be all right, and all of a sudden I started seeing Yin-Yangs everywhere,” she says. “Then I started reading more about it and seeing that there’s a little bit of light in the dark and the balance, just really the meaning behind the Yin-Yang symbol resonated with me. I wanted to put it on the chain just to remind myself that there is always light in dark, there’s always dark in light, and to stay balanced going forward.”

After a year of isolation, Kesha is starting to get back to normal. Earlier this month she announced her upcoming summer tour, set to kick off this August, which she wants to be seen as mini Pride celebrations.

“I love being around other people, I love entertaining people, and I thrive when I’m with people I love,” she says. “I just think this tour is going to be everybody going insane to a level that I’ve never seen before. It’s not during Pride month, but I just want them to be Pride shows. Pride parades filled with rainbow and glitter and light and love and connection and happiness and chaos and fun and energy. And I just want people to come let out all of the energy that we've been having to hold inside of our bodies for the past year and a half.”

During the pandemic, Kesha traded in her platform boots and sequined leotards for loungewear. Though, she says she still finds herself asking, “Do I have to put on pants that have zippers?” Nevertheless, the tour will be Kesha at her best, filled with color and dancing and, of course, lots and lots of glitter, but with a new, slightly more comfortable aesthetic.

“I like things that are over the top, it’s just my personality. I like things that sparkle, I’m kind of like a barracuda, I just like things that are shiny. I don’t think that will ever go away, but I will tell you I’m going to be a lot more in touch with what I feel good in,” she says. “I've been tie-dyeing a lot during quarantine so there's probably going to be elements of that. I started sewing a bunch of different outfits and needle-pointing and cross-stitching and doing a bunch of crafting things that I used to do when I was in high school. So, you might be seeing like, ‘punk grandma chic’ on stage.”