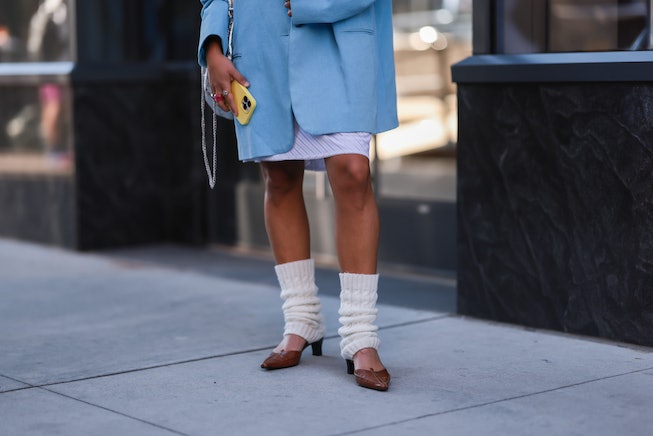 We should have seen this balletcore trend coming from a (street style) mile away.

As if it weren’t already abundantly clear that we are basically reliving the 2000s, one of its key components, plucked from one of its predecessors, is back and popping up on the bare legs of fashion week goers and It Girls alike.

Leg warmers, one of the main characters in 1983’s Flashdance and basically everything else during much of the ’80s, came back in the early aughts thanks to celebs like Madonna, Britney Spears, and Mischa Barton (to name a few).

In 2021, they were deemed by at least one publication as a trend that was “never coming back.” And yet, by the grace of TikTok, they started popping back up as recently as January. Now the trend is in full force, spotted on the legs of Megan Fox and Bella Hadid and on the streets at fashion week this season in New York, London, and Paris.

This newest iteration is in some ways more subtle than the way they were styled back then, paired with minidresses, or in neutral colors to offset a bold outfit. They’re also finding their way into the sustainability movement, with some people breathing new life into old denim but making leg warmer cutoffs.

They might be a bit polarizing, but during these transitional weather moments, it’s nice to have a little extra warmth on the bottom that can be rolled up or down as necessary during a given day.

Below, a few fall fashion inspo pics, along with a few pairs to buy when you’re ready to try the trend out for yourself.