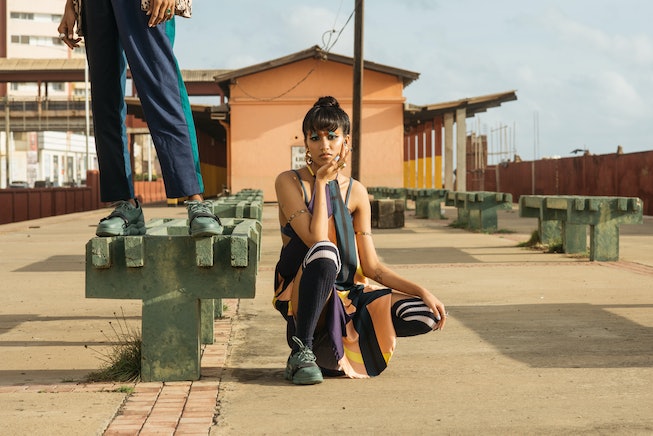 ICYMI, women’s sneakers are a pretty big deal. Major brands like adidas and Nike are (finally) starting to take note of the fact that the market (and its customer base) are a rapidly-growing sector — that shows no signs of slowing down. Despite the expansion of readily available inclusive products and women’s-only exclusives in recent years, one glaring thing has been missing from the sneaker industry: a women’s-specific sneaker brand. But Sarah Sukumaran is about to change that with her new venture, Lilith NYC.

“All of the Lilith NYC handles actually were created in October 2015 — that's actually when I first had the idea,” she tells NYLON over Zoom. The connotations of Lilith, known in tradition as the “she demon” who was Adam’s insubordinate wife before Eve weren’t lost on Sukumaran, who incorporates symbolism of the “divine feminine” throughout Lilith’s brand identity. “At the time, I thought it was going to be an e-commerce site,” she adds.

The daughter of Tamil refugees, Sukumaran was born and raised in Elmhurst, Queens. Naturally, growing up during the ‘90s in New York, her affinity with sneaker culture wasn’t a conscious choice, but an intrinsic and uncompromisable part of her life. Though, it was never part of her career plan. “I don’t have footwear development experience at all. My background has primarily been data-focused in the e-commerce analytics space,” she admits. As a devoted sneaker wearer, however, Sukumaran (relatably) dealt with the same issues many female sneaker fans do when it comes to product availability and sizing. “I’ve been a sneakerhead my whole life but have always been frustrated at the purchasing process for women. I just always found the experience to be super difficult when sourcing sneakers in my size or to even get the styles that I wanted when it came to high heat drops.”

Her frustrations were only exacerbated after she landed a role as Director of Product at Nike (“It’s the dream job, right? Especially for a kid growing up in Queens!” she laughs.) Now, as both a sneaker fan and an employee of the world’s biggest sneaker brand, the frustrations from women who love sneakers — both internally and externally — was more obvious to Sukumaran than ever before. “I was following a lot of women sneakerheads who would always complain about the same issues time and time again,” she elaborates. “Knowing the data and the insights, I could see that very little change was happening — or just not at the pace that I would like to see,” she adds. So, she decided to dive headfirst into creating Lilith NYC — a for women, by women sneaker brand — with absolutely no prior experience in footwear design.

“The thing I knew from the jump that I really wanted to emphasize and focus on was brand. When you're competing against the Nikes and the Adidas’ of the world, you just can't have something that falls by the wayside,” says Sukumaran. As a result, Lilith is a unique but wholly authentic representation of who she is as a person; this is not just another cookie-cutter DTC brand. Sarah’s lead designer (coincidentally named Sara Jaramillo) delved deep into the founder’s childhood and personal take on style to develop the inaugural sneaker: Caudal Lure, a low-top sneaker crafted from premium leather, suede, and neoprene. The debut silhouette drops in Lilith’s signature hue, Concrete Jungle Green — a nod to both the grittiness of NYC and her roots in Nainativu, a Sri Lankan island with lush tropics.

Through market research, Sukumaran uncovered that what most women wanted in their sneakers was comfort and performance-level tech without having to compromise on aesthetics. That meant bidding farewell to the “pink it and shrink it” approach that many female-focused sneaker releases historically followed and replacing it with a versatile, edgy silhouette with premium uppers and a high-quality Vibram sole. “I wanted to communicate that women’s style, gender, sexuality, it’s all on a spectrum,” Sukumaran explains. “Traditionally [sneaker] brands show up very masculine and very much tell women to be tomboys. I wanted for anyone to pick up this shoe and feel a closeness to it and an affinity to it.”

Storytelling is at the core of Lilith’s brand identity, and between the offbeat design of the sneaker silhouette and the personal details (like the fact that the original sockliner was a tongue-in-cheek homage to immigrants in Queens’ penchant for wearing socks with sandals), it’s clear that Lilith’s values are the same as Sukumaran. As the self-described “political friend” in the group, the brand’s taglines “Shoes On, Eyes Open,” and “Tread in Truth” act as a reference to the awareness that Sukumaran wants to ensure remains an integral and vocal element of Lilith. “Gen Z is really leading the way there,” she relays. “What I love about that specific generation is that they’re basically dictating how brands show up and it’s changing how [brands] talk on social media. It’s a complete 180 from what we’ve seen in previous years and I think we need to keep that pressure on.”

Clearly, Lilith is a brand that doesn’t shy away from activism, representation, and blurring the boundaries between what’s considered feminine and masculine. What’s more, it doesn’t pander to the sneaker industry’s traditional “understanding” of female consumers and what they want. You might be thinking, “Has it really taken until 2021 for there to be a women-led sneaker brand?” And as exasperating as it is to admit, yes it has. For Sukumaran, the reasons that sneaker brands have continued to completely overlook the female consumer center around three elements. “The thing to remember is that a lot of these other footwear companies started around the male athlete. That was the hero that you designed for,” she explains. “We probably haven’t heard language around a very specific woman’s line until the last five to six years at least.”

“Secondly, so many of these companies have acted as middlemen because they’ve been in the wholesale business. Traditionally, they haven’t sold directly to us so they have no idea what our lives are, what are our wants as consumers, what are our desires,” Sukumaran elaborates. “They don’t have that data, it’s gone to middlemen like Foot Locker or FootAction. All the places that actually sell direct-to-consumer probably know more about the consumer than Nike does, for example.”

Her final point is the one that hits hardest, and it’s a pervasive issue that’s impossible not to notice in almost every industry. “At the end of the day, there are a lot of white men at the helm of these companies that still are in decision-making positions. Oftentimes, they stay in these positions for 20 to 30 years. That’s not an exaggeration, that’s a minimum,” Sukumaran states. “Until they churn out, there are no seats at the table for women to sit in those roles. Nor are they actively creating new roles for any women to take up space at the table.” Inclusivity and representation is an issue that’s not limited solely to the sneaker industry, but it does play a huge part in how female sneakers consumers are perceived by brands.

This inequality leaves a lot of opportunity for up-and-coming brands like Lilith NYC, who truly understand the concerns and desires of those communities who are continuously underserved by major brands, to directly deliver what those consumers need. “They just don’t look at us as a target consumer, we’re not the face of the ads,” Sukumaran shares, talking at once about women, the BIPOC community, and residents of Queens. “A lot of people who’ve supported the industry are from here but these consumers just get overlooked in terms of purchasing power. I’m just flipping the dynamic and paradigm on who people think footwear consumers are, and who drives that purchasing behavior.”

As Sukumaran noted before, for a brand like hers, every decision is political. This is about far more than just developing a sneaker brand specifically for women. It’s also about legitimizing them as consumers, as entrepreneurs, executives, and more. When you can’t wait 30-plus years to maybe be given a seat at the table, you’re left with no other option than to bring your own or risk being dropped from the conversation entirely. “What I really wanted to do was provide a space for Black and brown women to show up unapologetically” Sukumaran asserts. “We know our consumers, we know ourselves, and we know what we want to see in a brand.”