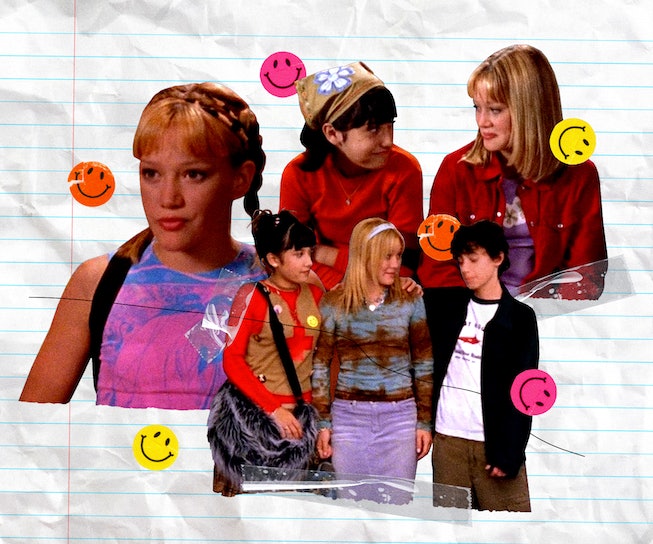 Lizzie McGuire was the pinnacle of Y2K fashion. The early-aughts Disney show, which boasted 65 episodes across only two (!) seasons, gave a sartorial glimpse into what 2000-era tweens were shopping for: bright, blingy outfits pulled from a Delia’s catalog and fast-fashion mall brands, or, even better, looks inspired by the low-rise, midriff-baring wardrobe of Britney Spears or Christina Aguilera. While the now-canceled reboot won’t be giving us a look at what Hilary Duff would wear today, we can still reminisce about her character’s memorable (and extremely influential) style.

“Her closet was moving as fast as fashion was moving back then. The 2000s were when the world of fashion really started speeding up in its disposability,” costume designer Kimberly Adams tells NYLON. She dressed Duff for the first season of Lizzie McGuire, setting a foundation for her signature wardrobe with bold, vibrant colors that contrasted popular girl Kate Sanders’ soft and pastel-tinted outfits.

Cathryn Wagner, who took on costume designing the show for its second season, doubled down on Lizzie’s look, opting for “all the bright, optimistic colors,” she says.

“I used to love to go to Forever 21 and spend an hour and a half there and fill a cart with everything. It was fantastic,” recalls Wagner. “These kids went from children's departments to being a tween and trying to be cool kids. Now we're into hiphugger jeans and wedge shoes and mom's eyebrow just went up. It's a very interesting time to get dressed.”

It’s been 20 years since Lizzie McGuire debuted on the Disney Channel with pastel tops, butterfly clips, bedazzled denim, and more. Ahead, Adams and Wagner look back on what it was like dressing one of television’s most fashionable characters.

Lizzie’s style really came to life because of Hilary Duff.

Adams points out that the show’s producers wanted to push Lizzie’s style beyond where they started with the character after the pilot. “They felt that she was a little too bland, too simple. It was a matter of walking the fine line between her not being the popular girl, but her not being a nerd, either," she notes.

But it was mostly thanks to Duff herself that Adams was able to create Lizzie’s Y2K fashion aesthetic. “She was so tapped into what her generation was really digging,” she recalls. “I met Hilary when she was 11, and you could see there was something there in terms of how she approached fashion and what she thought of it. I was open to giving her a lot of tools and letting her play with them, and seeing what made sense to her.”

By the time Wagner came on set for season two, she and Duff “were lucky because we got to do our thing on our own.” (Duff’s mother was fairly involved with fittings, too.) “For the shows that I did in the past with Disney, there were a lot more hovering opinions and photos sent back and forth, whereas we kind of got to do our own little universe,” says Wagner. “It wasn't hard, it wasn't torturous. It was a really joyful time and everyone had a lot of fun.”

Pattern-mixing, colorblocking, layering, and bedazzling were key to Lizzie’s style.

With each character sticking to a specific color palette, Lizzie’s bright and vibrant style was matched with mixing patterns, colorblocking, and layering — accessories, especially. “We kept it young, cheerful, and colorful,” says Wagner, who often took graphic tees and embellished them with rhinestones, like a Junk Food graphic tee in blue, emblazoned with “American Girl.” “I wanted her to have a little sparkle, literally and figuratively. You create the attention up towards the face, towards the eye. That's where everything shows.”

From there, Wagner would take style cues from the chosen top and match the pants, add some hair accessories, and jewelry. “They were all really thought out, even though they look kind of random,” she adds. “But there were multiple fittings and tailoring — even T-shirts and jeans were tailored to fit [Duff] just right. There’s quite a bit that goes into a really simple scene with kids just talking.”

The show took place during the beginning of fast fashion.

Forever 21 had been around in Los Angeles, where Lizzie McGuire was filmed, since the ‘80s, but fast fashion’s mainstream appeal didn’t take off across the country until nearly two decades later. (H&M opened its first-ever U.S. location in New York in 2000, and Forever 21’s glory days date back to the early aughts.) Both Adams and Wagner were aware that they were dressing for a young generation at the peak of mall culture.

“Being out in all of those teen stores was definitely a memory of mine, when fast fashion was just getting faster and disposable,” says Adams. “It was tons of mall shopping all across Los Angeles from the west side to east side, because there's such different distribution in the various stores. We were trying to tap into as many options as we can find to be able to bring them back and figure out what works.”

“Wet Seal, Forever 21, H&M, and cheap and cheerful ran the day. You could go and just buy this junk, buy lots of junk, and put it all together and use it or not use it. It was very rare that anything was expensive or precious,” says Wagner. “It was all just let's have a flight of clothes in the room and pick. And sometimes Hilary would come in there and say, 'What if we put this with that?' I'd go, sure. You bet. She would sometimes do patterns that I wouldn't have thought of and I'd go yeah, that works. I like it.”

While Lizzie channeled her inner Y2K pop star, Miranda’s wardrobe leaned more towards rebel-meets-tomboy. “She didn't gravitate to the same combinations of things as Lizzie did,” explains Adams. “She, too, was her own kind of funky, against-the-grain kind of gal, and we just kept trying to push that with both of them.”

The two BFFs had very different styles to the naked eye, but there was always a through-line between their outfits, whether it was a similar color choice, print, or silhouette. “Sometimes friends dress similar or they borrow clothes from each other, so you kind of walk this funny line between each one having their own look, but they're both wearing similar pants,” explains Wagner.

The girls’ hairstyles completed every outfit.

In addition to the show’s coveted wardrobe, the hairstyling was always a standout throughout the series. Wagner and Adams give Adruitha Lee, the hairstylist behind both seasons, plenty of credit for adding an extra aspirational layer to every character’s look. “Those girls had so much fun, from my memory, of walking into the hair trailer,” remembers Adams.

“Adruitha was so great on the show. She's so talented and it makes a huge difference in the way these girls have hair that looks clever without it being overstated. What a difference that makes,” says Wagner. “Once you go through great hair and makeup and then you come back and you put on the costume, it's magical.”

Getting dressed for Aaron Carter’s guest appearance was a pretty big deal.

Lizzie McGuire’s “Here Comes Aaron Carter” holiday-themed episode from the show’s first season featured the “I Want Candy” pop star at the height of his career, causing a huge stir among the tween cast at the time. “I remember how excited the girls were. That was a huge ordeal of finding a perfect outfit for the dance number with him. They were over the moon,” says Adams.

Turns out the ordeal paid off. Not only did the show’s writers incorporate a kissing scene between Carter and Duff for the episode — a rarity for Disney — but the two started dating shortly after. That is, until Lindsay Lohan got into the picture.

Lizzie’s impact was just as big when the show was happening as it is now.

While an entirely new generation is getting to know Lizzie through Disney+ — and millennials are turning to the show again for some nostalgic comfort — the series' impact spans decades. “It's just so interesting that it’s still in people's psyche,” says Adams, who has been experiencing an influx of interview requests from her agent recently. “It's great that anybody in this day and age even remembers [the show] because there's so much content since then. I looked up the characters to see how they've all grown up, and boy, it's pretty wild where they've all gone.”

Wagner realized Lizzie McGuire’s influence earlier on when she received fan mail from a group of young girls from the Midwest while working on the show. “It included a picture of them dressed like Lizzie and Miranda for Halloween and it was just so cute,” she says. “It made you think people really watch and they're noticing. It's not just a mindless half-hour show. They're really looking at this stuff. That really pleased me. That was really fun to know that you're giving somebody a little bit of joy in the day.”