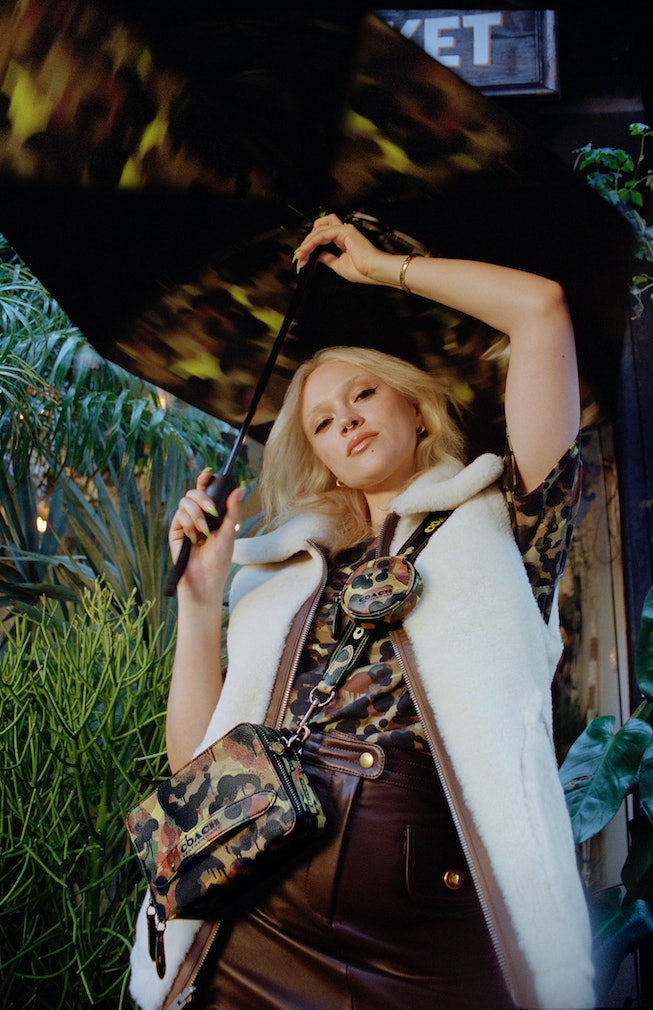 Coach is revamping its signature camo print with a new and neon-tinted collection that’s available now to shop. For the launch campaign, the American heritage brand teamed up with some of its favorite famous faces, including singer Lolo Zouaï. The High Highs to Low Lows artist stars alongside brand ambassador Michael B. Jordan, Debbie Harry, singer and actor Quincy, and former NBA star Jeremy Lin.

“The shoot was actually on a very, very rainy day,” recalls Zouaï over the phone with NYLON. “It was pouring. We spent a bunch of time doing the glam, and then I had to hide under trees and it felt like a rain forest. But the shoot was great. The photographer, Bladi Corniel, was amazing, and it just was super fun and easy.”

Zouaï has been a friend of Coach for a few years already, but she’s a longtime admirer of fashion. A quick scan through her Instagram feed and past music videos prove that she can put a great ‘fit together, and growing up in San Francisco has influenced her appreciation for personal style and thrifting. As a rising artist, she’s also been able to dive into the fashion world more thanks, in part, to brands like Coach.

“I've always just really loved dressing myself,” she says. “Mostly my whole life, I've been thrifting, and growing up, I would go to the thrift stores in the Mission District. Before my music started taking off, I was really just thrifting. Then, finally, when I started making my own money, and having partnerships with brands, getting to discover fashion has been a really exciting thing for me.”

Ahead, Zouaï spoke with NYLON about her personal style, how it has evolved, and the creative process behind her music right now.

How important is style to you as a musical artist?

When I was a teenager looking at artists, I loved their music, but then also their style. If they didn't have a style that I liked, I probably wasn't going to be a fan. In high school, I was really into Sky Ferreira and Eliza Doolittle. They were just so cute, and I loved that. That was my main inspiration.

I think that the importance of style mostly shows in my music videos. I dropped a song called “Galipette,” and the video is really weird and artistic. The styling has shined through, too, and I think that it's such a good way to establish yourself as an artist.

How would you describe your personal style right now?

I think I have two styles. Sometimes, I want to wear really fun colors, like more tennis skirts and big shoes — just really, really colorful. I really like Japanese street style and South Korean style. Or I go back to my San Francisco roots. I was voted biggest hipster in San Francisco at my high school, which is so silly, but I go back to the more oversized, grandma-grandpa style with baggy jeans or baggy work pants — just more muted. It really depends on my mood.

It also changes wherever I go. I lived in Paris for six months when I was 19, and everybody was just wearing Stan Smiths and large trench coats. I was like, ‘Is this what I have to do?’ So I bought a trench coat, and then I was just like, wait a minute, no.

Does your style change at all for a performance or when you’re in the studio?

Now, I’m in studio mode and I have like six pairs of Crocs and that's it. The studio is just about being comfortable so I’m usually wearing sweatpants because there's AC. The temperature is always cold in the studio, even if it's hot out. Or I’ll wear big T-shirts and shorts or a skirt. It doesn't really matter unless I'm going to be seeing somebody or inviting somebody to a studio. I don't really care about getting ready.

On stage, I love to show my legs and wear skirts with clunky boots. I'll have this mix of girly but really powerful and kind of punk. Recently, I've been experimenting a lot more with my style. I feel like I established my personal style with my first album, and now during shoots, I'm changing everything with makeup and what I wear. I just did this Vevo performance and I wore this large gown. I don't feel like I would have done that two years ago, but now I get bored of my own stuff. I'm just like, let's just do something weird.

Musically, what’s inspiring you right now? What’s your creative process been like?

Right now, it's awesome. Every day I can make something. I can write something, which is so rare, and I do not take it for granted because during quarantine and lockdown, I had no inspiration at all. I was very unhappy and I didn't want to write unhappy music. I was like, this is so depressing. Nobody needs this right now.

Now that I'm feeling inspired again, I'm having a lot of fun and putting less pressure on myself than I used to because I'm seeing everything in a bigger picture. There's so much going on in the world. Climate change is really showing itself right now and it's hard to worry about small things when there's a bigger issue. The world is really heavy right now, so I just want to be carefree in my music, and just make things that make me happy, and not take it too seriously.

You’re known for blending your French and Algerian heritage into your music. What's your process when it comes to making music with those influences?

At first, when I started putting French and Arabic influence into my music, I didn't even think of it as a bigger picture thing. I kind of speak these languages, so let me put it in my music, and people will get to know me. Then, I realized that it was touching different countries and different parts of the world, like North Africa, the Middle East, South Korea, and then France. It brought me back to my roots in France and made me feel really accepted in France, when I didn't even grow up there.

I’m just making a lot of music, and there will be more stuff coming out. I'm set to be on the Dua Lipa tour next year. It got pushed back a few times, so who knows what's going to happen? But I have been looking forward to that a lot.

See more of Coach’s camo print collection, below, and shop it online at Coach.com.