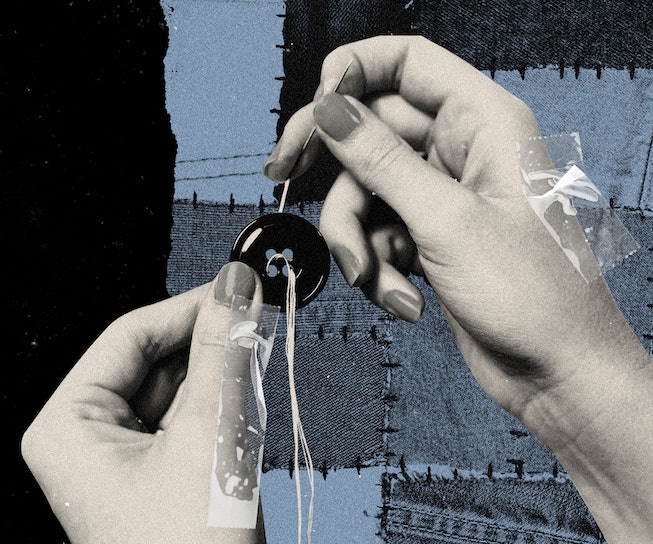 Lindsay Rose Medoff, CEO of Suay Sew Shop, a clothing upcycler nestled along a bend of the Los Angeles River, apologizes if she comes off as a bleeding-heart activist; it’s just that she’s keenly passionate about what she does. Suay, she describes, is more than a label or a boutique manufacturing house. For Medoff, it’s a movement, one that not only “creates a culture of community and reuse” but also normalizes mending, or garment repair, as a thrifty, creative, and even radical act in an era of cookie-cutter mass production and crass commercialism.

It’s better for Mother Earth, too. While sustainability — particularly the mercantile kind that has co-opted “conscious consumption” as a slogan to sell products — is “so elitist in so many ways,” Medoff says, the age-old art of mending requires nothing more than needle, thread, and will. “Not only is it a powerful way to extend the life of clothing and keep textile waste out of landfills, but it’s also an accessible way to participate in sustainable fashion without having to buy anything new,” she adds.

Skills like darning and patching, once second nature to homemakers, have gradually fallen out of style, a victim of a decline in home-ec classes and the rise of trendy, disposable fashion that is cheaper to replace than repair. Consumers are buying 60% more clothing yet hanging to it for half as long as they did 15 years ago. As a result, textile waste is a burgeoning problem: In 2018 alone, Americans threw away 17 million tons of garments, shoes, and household linens, according to the U.S. Environmental Protection Agency. That’s the equivalent of more than 775,000 Statues of Liberty.

Every week, Medoff and her team collect thousands of pounds of textile castoffs at Suay for repurposing or recycling. But she’s also seeing an uptick in interest in mending, particularly as the pandemic wears on. Late last year, Medoff decided that Saturdays at Suay would be “Save It Saturdays.” From 10:30 a.m. to 3:30 p.m., masked customers form a line at the store with items in need of TLC: a holey sweater, a dress with a busted zipper, a pair of jeans with a blown-out crotch.

Suay charges between $10 and $40 depending on the time and labor required, with the proceeds going to a fund that benefits L.A. garment workers, who are often overworked and underpaid. Medoff’s eight-person mending squad handles a few hundred repairs every week “and that number is doubling every few weeks,” she says.

When COVID-19 is under control, Medoff, a former sewing instructor, hopes to offer mending classes for anyone who wants to give repair a go. “I think people are realizing they don’t need a big company to be their sustainable hero; they don’t have to buy a jacket made out of recycled plastic bottles to participate in sustainability,” she says. “They can become their own sustainable hero by fixing their own stuff.”

“They can become their own sustainable hero by fixing their own stuff.”

Mending has been around as long as clothes have, says Kate Sekules, fashion historian, mending instructor, and author of Mend! A Refashioning Manual and Manifesto. The earliest humans wore garments pieced from an assortment of animal skins; ancient Egyptians would repair a textile three or four times before laying it to rest as embalming cloth in someone’s tomb; and Edo-era Japanese used “little stabs” of embroidery to bolster the strength of their homespun fabrics. Throughout the ages, the working poor would do whatever it took to extend the life of their wardrobes because the textiles themselves were “extremely valuable and precious and worth preserving,” she says.

Fast fashion and its model of built-in obsolescence, on the other hand, has devalued both the materials and the human labor that make up a garment, though Sekules dismisses the idea that a skirt from H&M or a jacket from Zara isn’t worth fixing when it falls apart. “Even if it’s so-called fast fashion or big fashion, it’s still being constructed by humans and we should remember that,” she says. “[Otherwise], we’re not honoring the people who slaved on it — ‘slaved on’ is a loaded term, but it’s not always inaccurate.”

Sekules is a proponent of a technique known as “visible mending.” Instead of keeping the repairs as subtle as possible, visible mending draws attention to the site (or sites) of rehabilitation as a fashion statement, a political act, or both. “It’s a scar and a badge of honor at the same time because you’re displaying to the world your intention to preserve and improve and personalize all those things in one,” she says. #MendMarch, a hashtag she forged on Instagram to champion repair, has rallied a growing community. “People are really getting behind it because not only is it practical, it’s also infinitely creative and everybody can do it their own way,” she says. “There are no rules. There’s no right way. And there’s no wrong way.”

Mending tends to get a boost in times of scarcity and deprivation. (“Make Do and Mend,” Great Britain’s World War II rationing initiative, readily springs to mind.) COVID-19 has cued up a similar, if not entirely identical, need. “What we need to preserve is our sanity,” Sekules says. Mending, she adds, can be a meditative experience that “shuts up your mind” to stress, anxiety, or boredom. And in doing so, we might realize “it’s our relationship with clothing [today] that needs mending.”

For Orsola de Castro, global creative director of Fashion Revolution and author of Loved Clothes Last: How the Joy of Rewearing and Repairing Your Clothes Can be a Radical Act, it’s our relationship with each other that also requires patching up. “We haven’t been treating each other as equals,” she says. De Castro and fellow designer Carry Somers founded Fashion Revolution in 2013 in the aftermath of a horrific building collapse in Bangladesh that killed 1,133 garment workers and injured thousands more. The disaster threw into relief the untenable cadence of the fast-fashion machine, its lack of regulation, and the safety and labor abuses that underpin the business model.

“If we were to convince Gen Z of the added value of mending, we will be naturally slowing down the system; we will be saying we want better, not more,” she says. “And that freedom from speed and overquantity could potentially give supply-chain workers the time and dignity to practice their skills.”

“If we were to convince Gen Z of the added value of mending, we will be naturally slowing down the system; we will be saying we want better, not more.”

De Castro thinks that the H&Ms and Zaras of the world should take on more responsibility for increasing the longevity of their clothes by offering affordable mending services inside their stores. “This should be the modern takeback scheme,” she says. “It should no longer be ‘Bring in something old, and we’ll untransparently recycle it at some point in time, but you’ll never know how.’ Rather, it should be ‘Bring me something broken, and I’ll mend it.’”

While “circular fashion,” with much of its focus on fiber-to-fiber recycling innovations, can be difficult for an individual to tackle, de Castro says, helping clothes stay in circulation longer is “something that we can all do.” Extending the life of a garment by just three months, according to the Waste & Resources Action Programme, a U.K. environmental nonprofit, can lead to a 5% to 10% reduction in each of its carbon, waste, and water footprints.

“We truly we need to bring back mending as part of our culture,” she adds.