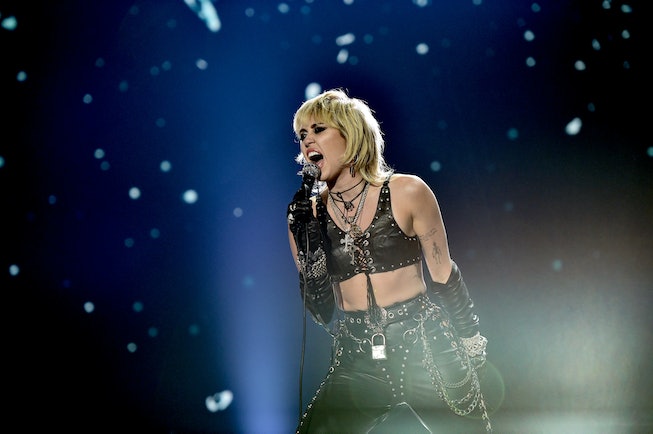 Lil Nas X’s latest video for his song “Montero (Call Me By Your Name)” took up much of the internet discourse this past week — save for that silly little boat. The artist was praised by fans and critics alike for his unapologetically bold queerness. One of those supporters was Miley Cyrus, who even secured a pair of Lil Nas X x MSCHF’s Satan sneakers.

Only 666 of the shoes were released, priced at $1,018, a nod to Luke 10:18, which says, "I saw Satan fall like lightning from heaven." The Nike Air Max 97s were punched up by Lil Nas x and MSCHF with a pentagram, inverted cross, and a drop of human blood courtesy of the MSCHF crew.

The frenzy around the sneakers prompted a response from Nike, which released a statement to Input distancing itself from the collab.

“We do not have a relationship with Little Nas X or MSCHF,” the statement read. “Nike did not design or release these shoes and we do not endorse them.”

Miley Cyrus showed some support for Lil Nas X by wearing the Satan shoes from his collab with MSCHF.

Rihanna casually stepped out in Los Angeles in a black Rick Owens look, knowing full well when her new music is going to drop.

Hailey Bieber sipped out of her Museum of Peace & Quiet mug while wearing Jacquemus’ knitted romper.

Kylie Jenner, resident of Los Angeles, said she was ready for warm weather while wearing a custom fuzzy look from LaQuan Smith.

Rico Nasty took the face mask to the next level with an oversized heart headpiece.

Dixie D’Amelio matched the bathroom in a shiny black look.

Devon and Sydney Carlson dove into their vintage archives to show off their new springy Wildflower cases.

Tracee Ellis Ross wore a S.R. Studio. LA. CA. couture look for her appearance on The Tonight Show, along with old Celine earrings and Gucci x The North Face boots.

Storm Reid also had a Versace moment this week, wearing a lilac skirt and corset top.