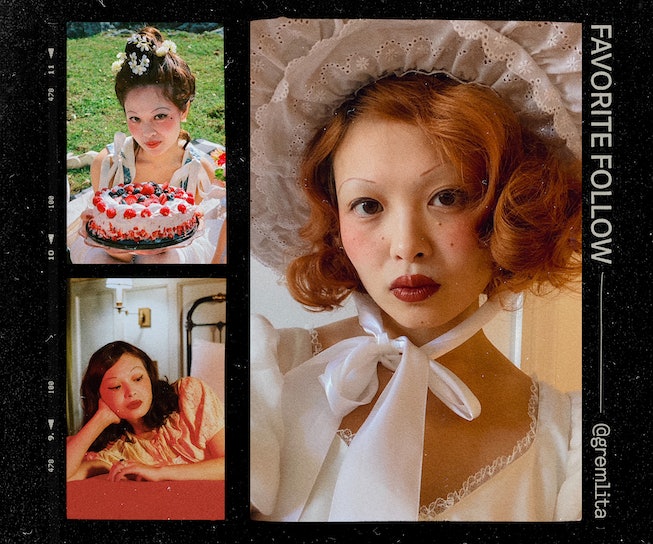 Arriving at a café hidden beside a co-working space in the heart of Chelsea, Mina Le made quite the entrance. Though in a rush to make our meeting from a vintage shopping convention right next door, she caught my eye — and apparently, those around us — in an elaborate ensemble, draped in crystals and a silk gown. It was almost as if she really did “time travel from the 1930s.”

If you’ve been in a fashion rabbit hole online recently, you might already be familiar with the Brooklyn-based content creator, known as @gremlita, for her candid cultural and fashion takes on YouTube and her extravagant OOTDs on Instagram and TikTok.

On the internet, Le has captured the heart and attention of many, and she did it so quickly. But dominating the YouTube charts and TikTok feeds wasn’t always the plan. Prior to social media fame, the Vietnamese-American 25-year-old worked at a stationery shop before being let go due to the sudden pandemic. “I had to move back home to Maryland, which is where my mom lives,” Le tells NYLON over an oat latte. “I didn't know what to do with my life because I wasn’t sure when things were going to open again.”

Now that she was stuck at home, Le would go through deep dives on YouTube to pass the time. “I honestly was not a big YouTube watcher until I started making videos again, but I got into this spiral of watching those videos where they look at the historical accuracy of Disney movies.” With her newfound interest, she made her own Disney video in 2020, and to her surprise, it’s what accelerated her career. “After that, it expanded and I started dipping my toes into other types of video formats,” she explains. “I was mainly just doing it for fun at that point so I didn’t expect YouTube to ever be a career but when I started getting those numbers, I was like, ‘Oh my gosh, I can actually be paid for this.’”

Le is living proof that things do, in fact, fall into place after all — even amidst uncertainty. Now with more than 1.2 million followers across her social platforms, Le has built a tight-knit community and is only just getting started. Now signed with IMG Models and WME, perhaps we’ll see the internet star dabble and expand into other unexpected industries very soon.

Ahead, Le spoke with NYLON about her experience as a YouTuber, her personal style, and more.

“I had a bit of an existential crisis as most people do in their early 20s when you don’t know what you’re going to do. I wanted to be in fashion, which is why I moved to New York after college. I was a fashion intern and everyone knows that’s the worst career to have. I was literally just a mule carrying around garment bags for stylists and getting coffee and stuff, like Devil Wears Prada except I’m pretty sure that Anne Hathaway’s character is salaried. After I had that experience, I did reconsider being in the fashion industry, so I started to pivot into the film space and did a documentary internship, which was cool. But overall, I was trying to figure out what I wanted to do and where I fit in but unfortunately, a lot of the entry-level jobs are just not it.”

On The Pros & Cons Of Being A Content Creator

“It’s weird because I had all these issues trying to get into the industry and then suddenly, I have this job. I’m beamed up to a certain level where I get invited to shows and I get to be taken seriously, which is a huge plus for me and I do like having a platform. I actually don’t mind being perceived because I think it’s nice when people come up to me and they say they like my videos. I also like reading what people have to say because I do have a lot of intelligent queens in my comments who bring the discourse to a new life.

Probably the downfall is because I am a content creator, there’s this idea that I have to be producing content quite consistently and there are moments when I’m just so tired. For instance, I don’t always want to have to edit this video by the next two days when I’m supposed to be putting out a video, or when we’re doing it two days earlier because the sponsor needs to see the video earlier. So I guess the downside is also working for myself. There are a lot of self-imposed deadlines because there’s this psychological terror that if you don’t meet these deadlines, then the algorithms are going to suppress your content and your career is over and you’re back to hauling garment bags around Fifth Avenue.”

On How She Manages Living Life Perpetually Online

“I did hire some video editors, which has definitely helped with taking some responsibilities away from me. But overall, I’ve just been trying to be kinder to myself lately. I know that a lot of my fears are actually not realistic, like, I’m not just going to become irrelevant because I posted a video two days later than I intended to post it, for example. But it is understated how difficult it is to work for yourself, but I also want to emphasize that I love my job and that I would hope to never have to work for someone else again. Despite all these issues, I like being able to take a long lunch break if I want or take the day off if I have a friend or family member visiting town. There’s a lot of independence that unfortunately, companies refuse to give their employees, which I think is really upsetting.

I’ve also started separating parts of my apartment where I’ll work. I used to work a lot on my bed and now I don’t do that because I like to think that the bed is for sleeping and relaxing, which is something that people don’t think about too often when they work from home. It’s really important to have a work-life balance and rearrange your environment to accommodate your lifestyle.”

On Perfecting Her Signature Look

“It definitely has adjusted drastically over the years because it was only within the last two years that I really became concrete about my style. Before then, I was doing everything, like I had a maximalist phase, which is what the TikTok girls are doing now, and I also had a streetwear phase and an Urban Outfitters one, too.

These days, I’m really into those patterned, colorful tights and the leg and arm-warmers trend. I’m also a fan of the low-rise bottoms, which I know I’m going to get hate for that very polarizing. I like the sheer tulle skirts since I love Carrie Bradshaw moment. Subversive basics are cool, which I don’t think is necessarily my style but it’s very nice to see.

In terms of my wardrobe, I do mostly vintage and secondhand shopping, but I also do really like smaller designers since a lot of big retailers just don’t understand how trends work. I like a lot of designers with usually one person behind the brand for some reason. There’s this Chinese designer Renli Su and her stuff is kind of in this same realm as designers like Simone Rocha.”

On Staying True To Yourself As A Content Creator

“This might be just the most cliché thing, but be true to yourself because there are so many people in this industry that are going to try to mold you and change you into what they think is successful or what they think you should be, which will just end up being terrible for your mental health in the long run. Audiences will also perceive you to be a certain way and project their ideas onto you, so it’s important to have a strong sense of self so that you don’t get lost in all the chaos.

You also can’t be money hungry, like I’ve seen so many influencers who have just fallen from grace. For instance, I’d see people who were so into sustainability, and then the Fashion Nova check comes through and then suddenly that part of them never existed.”