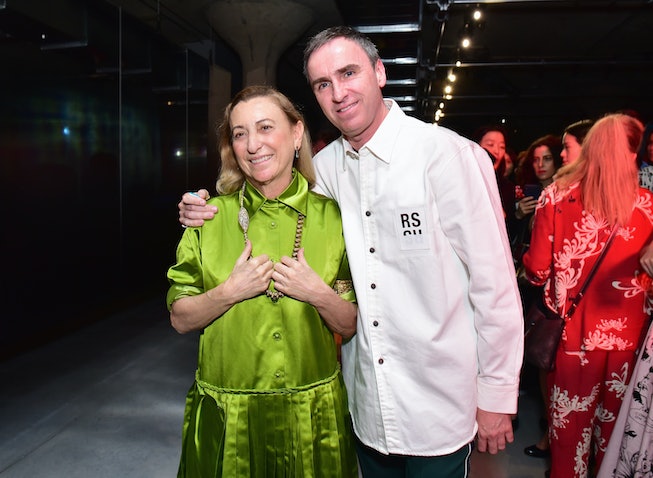 After their highly anticipated debut as co-creative directors, Miuccia Prada and Raf Simons will be taking your questions on Thursday, Sept 24 during Milan Fashion Week. The show will be taking place digitally, streaming on Prada's social media platforms and website.

Fans can submit their questions via Prada's site, and it seems that nothing is off limits, though the questions will be pre-selected ahead of time. It also seems like an opportune time to ask about Raf's upcoming foray into womenswear for his namesake line, which is set to debut in October.

Prior to working as co-creative directors, Simons and Prada were longtime friends and supporters of each other. Simons had even waxed poetic about Prada's work in interviews long before he was set to work with her.

"The reason I wear Prada is not just because I like the clothes; it's also because Miuccia has a mindset that I can relate to," Simons told GQ in 2016, shortly after his appointment at Calvin Klein. "Even if a brand has a beautiful coat, if the person who designed it is not the kind of person I can relate to in terms of vision or opinion or culture, then I just don’t want to wear it."

The clock is ticking to submit questions, as Prada's show is scheduled in just a few days. Head to Prada's website with your burning questions.