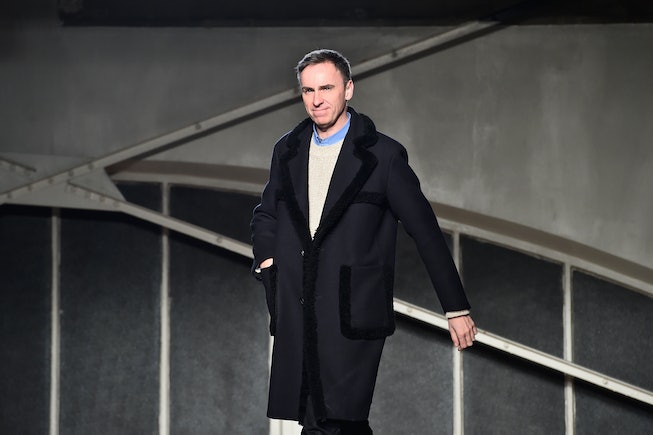 In a surprise announcement on Thursday, Raf Simons is officially getting into womenswear. The designer revealed that he will be presenting his first-ever women's collection on Friday, Oct. 23 alongside his longtime menswear line.

This isn't Simons' first foray into womenswear, though it is the first official collection under his name. Since as early as 2005, Simons oversaw the women's collections during his time at Jil Sander, Dior, and, most recently, Calvin Klein.

Simons' abrupt departure from Calvin Klein in late 2018 was heavily publicized. He spoke about his difficulties with leading a large brand with WWD a year later saying, "As a creative director, it's more complicated because very much most of these companies have everything in place and then you come in and the focus is in the beginning very much about collections."

"You bring probably a huge list of creatives in, but I have been in places where I had to be involved to bring people into merchandising or commercial because they hadn’t really sorted that out," he added.

Since April 2020, Simons has been co-creative director at Prada alongside Miuccia Prada, and the two are set to present their first collection during Milan Fashion Week on Thursday, Sept. 24. All eyes will be on Simons, though, come October and his to-be-determined presentation format.