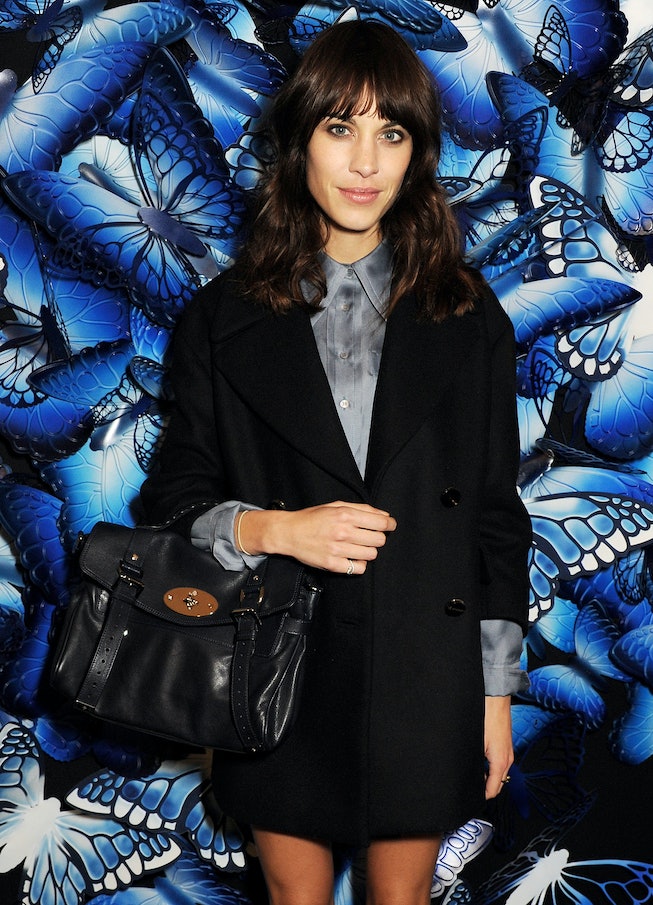 When Mulberry's 2010 hit "It" bag, the Alexa, made its debut, "all the editors had them," recalls Julia Neel, then-fashion editor at British Vogue online. She remembers being stopped on London's Carnaby Street by someone wanting to take a picture. "Almost like they were celebrity spotting," she describes. "It was during the time Emma Hill [Mulberry's creative director from 2008 to 2013] did shows at Claridge's on Sunday mornings and had after-show parties in its ballroom."

Less than a year later, UK newspaper The Observer ran an article, titled "Money Bags," describing the heritage brand's "trophy bag" and its anomalous post-recession success and popularity as both a must-have and profit-making design.

At one point, 380 of the bags, which retailed at £750 or about $980 (the upper end of the bag-spending spectrum back then), sold in just one week. Hill was quoted as saying she could "smell the money" after having seen an initial prototype.

"I recall the Alexa being a staple for a lot of the original bloggers," says Sophie Hersan, co-founder and fashion director of the resale site Vestiaire Collective, where the bag is still a popular sell-out item.

A decade later, on its 10th anniversary, Mulberry is re-releasing the Alexa. It comes ahead of the luxury British brand's 50th birthday in 2021. This time the bag comes in a trio of sizes and with more of a focus on sustainability: It is remastered to adhere to the heritage brand's responsibility charter, which commits to beautiful design through positive innovation. The brand, meanwhile, has always championed a made-to-last philosophy.

"It's something we had been thinking about for the last one and a half to two years," says Mulberry CEO Thierry Andretta. "It's a bag that is still relevant, we still have a lot of search on the Mulberry Alexa on social media, so it's a great moment to reinterpret it."

Details and color options have been updated, including a very Instagram-friendly neon yellow and pink, along with three different sizes from on-trend mini to oversized. The bag's leather comes from environmentally-accredited tanneries and is manufactured at its carbon-neutral factory in Somerset.

Arguably the Alexa was one of Mulberry's most successful designs, timeless and classic, spotted on the arms and shoulders (depending on how you wore it) of everyone from Rihanna and Olivia Palermo to Claudia Schiffer, Katie Holmes, and Princess Eugenie. Though the Cara and Del Rey — named after the model and singer, respectively — came after it, they never quite managed to achieve the same level of desirability.

"You can literally throw the kitchen sink in there and it still looks elegant and I think that was the biggest draw to it, that it did have that dual functionality of looking pretty and looking functional at the same time," says Catherine Kallon, founder of Red Carpet Fashion Awards. "But in particular, it had the Alexa Chung cache to it, which made it more desirable."

As the story goes, Hill had been inspired by a picture of Alexa carrying the Mulberry Elkington, which was a man's briefcase-meets-satchel, in coming up with the bag, though Alexa herself played no role in its design.

"The bag is pretty indicative of her style because back then she kind of had this way of looking almost tomboyish but feminine and I really think the bag did represent that," describes Kallon, who owned a tan version in the large size.

"I think it was the right bag in the right moment," says Andretta. It's a situation the bag finds itself in once more: The Alexa has been selected to feature in the Victoria & Albert Museum's upcoming bag exhibition, Bags: Inside Out, which through historical breadth will look at how bags can be both an object of function and an object of status.

Lucia Savi, curator of the exhibition, says it's a bag she wanted from the absolute beginning (even before Mulberry became its sponsor). And the one on show was worn by Alexa. "The Alexa sits in the second section about status and identity. It has this power of capturing an era, the connection with Alexa made it very popular among a younger generation for a brand like Mulberry that, until then, was seen as a bit more of a traditional brand. The idea that the younger generation was buying into British; post-recession, people wanted to buy British. I feel like we're almost at that same point," says Savi. Only this time, replace the British element with a sustainable one and think of recession as a synonym for the pandemic.

"The recession of 2009 was a catalyst for a lot of changes in the industry and in broader fashion trends," observes Vestiaire's Hersan. It's something that Rachel Koffsky, Christie's head of Sale, Handbags & Accessories, also notes. "What is widespread is the importance of vintage. While stores and factories have been shut, collectors are looking into their closet to bring out iconic favorites."

It's not just the consumer. Koffsky points out that prior to the pandemic, many designers were already looking into their archives for inspiration. "Alessandro Michele is heavily inspired by the heritage Gucci handbags and Maria Grazia Chiuri has also delved deep into the history of Dior." Cue the resurgence of the Saddle Bag.

Hersan sees the same at Vestiaire. "Many of this season's popular designs are actually re-editions of archival pieces from many decades ago." A looming anniversary will only serve to heighten that. "There is a huge resurgence of desirability when a piece celebrates an anniversary, whether it is nostalgia from seasoned collectors or new shoppers falling in love with something they have never seen before," says Koffsky.

What makes the Alexa special? It's relaxed and stylish, a contemporary take on the tradition of naming bags after influential women — something that is thought to have begun with the Hermès Kelly. Prior to the arrival of the Alexa, it had been experienced most prevalently, says Savi, during the 1990s and the 1970s before it. "We know other celebrity stories but this was 10 years ago, it's a more recent success story really representing the idea of celebrity as endorsement at the time."

"I would feel cooler carrying the Alexa," describes Neel, who has lovingly kept hold of hers all these years, nurturing the leather with moisturizer. "It was the perfect size for everything," she says, and she can't help but think it reached the lofty heights of Kelly kudos, given that it went out of production. And current "It" bags, she thinks, are now so temporary.

"A cult bag is one that has made an impact on the broader culture and developed a loyal following within the industry and consumers alike," says Hersan. She may as well be describing the Alexa. It also made appearances in Gossip Girl and in the film I Don’t Know How She Does It, starring Sarah Jessica Parker.

There may not be shows at Claridge's, or after-parties in its ballroom, but in 2020 there certainly is a place for a bag that can carry all of one's essentials and still look good. Here comes the Alexa, 2.0.