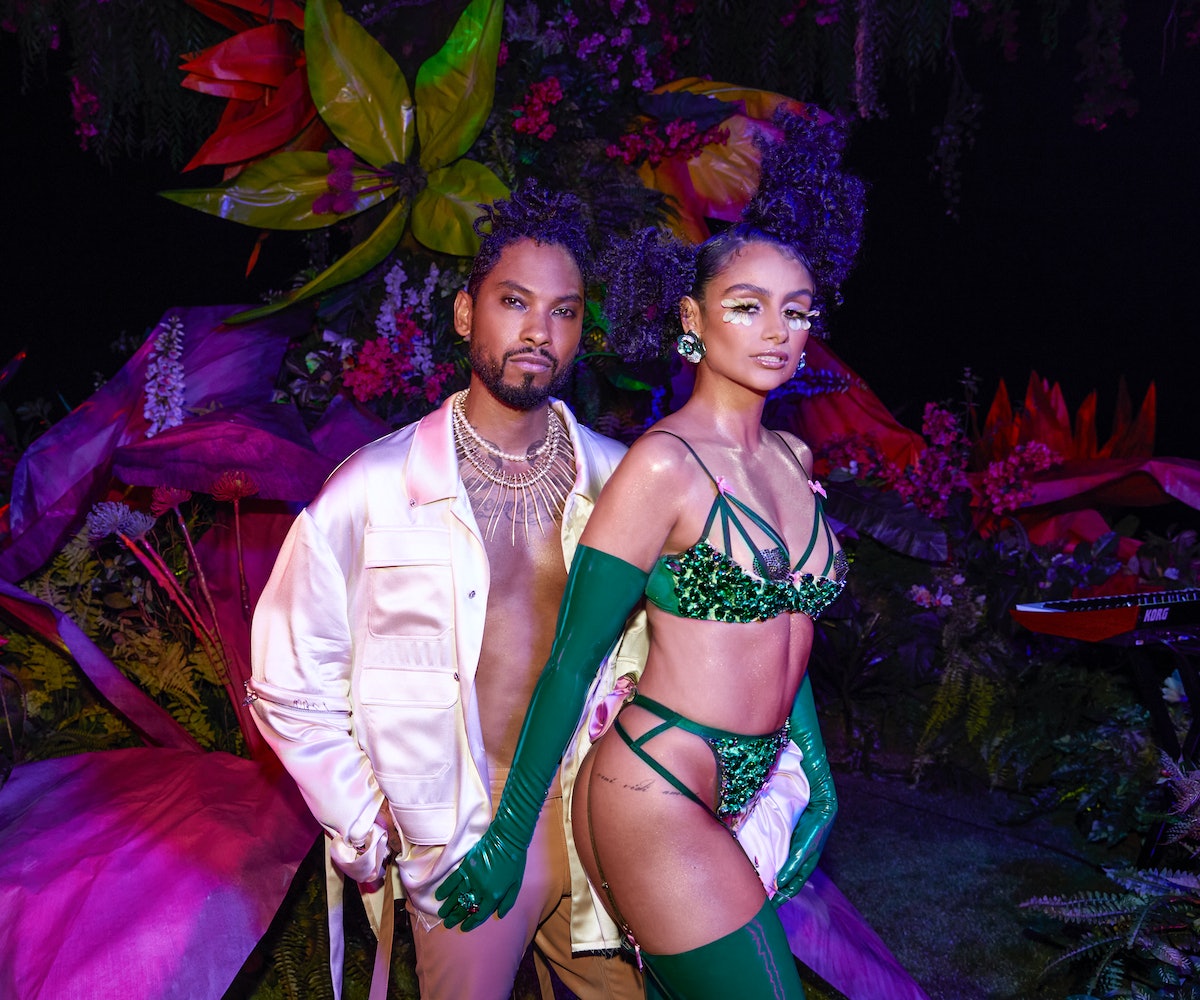 Becoming a Savage X Fenty brand ambassador is a pretty sweet gig. But what's even better? Getting to actually walk in the Savage X Fenty show. Luckily, Nazanin Mandi has done both. On Friday, she makes her fashion debut in Rihanna's Savage X Fenty Show Vol. 2, available to stream on Amazon Prime Video, alongside her husband Miguel, who performs his hit songs "Adorn" and "Waves."

"I couldn't ask for anything better," recalls Nazanin over the phone with NYLON. "It was such an unbelievable experience, honestly. I'm just honored to be a part of it."

The actress, model, and musician's partnership with Savage X Fenty only started a few months ago, but Nazanin has already garnered some major milestones along the way: In July, she modeled for the brand's Summer 2020 campaign, and in August, she found out she was going to be in the second show, which went into production in September. "We filmed it on my birthday weekend," she says. "So it was the best birthday gift."

Ahead, we chatted with Nazanin on how she prepared for her first Savage X Fenty show, the custom lingerie look (and latex accessories) that she wore, and how long she practiced with her husband Miguel for their choreographed number together.

How did you find out you were going to be a part of the Savage X Fenty show?

I found out in August of this year through my agent. I was not expecting this at all, and it was a beyond pleasant surprise. I was shocked. I'm so grateful it happened.

Since you've been working with the brand for some time, what do you love about it?

I love the brand for obvious reasons. Rihanna and Savage X Fenty celebrate diversity across the board. From her design to what the brand truly means, she is breaking the mold. Savage X Fenty is the future, and it's something that we needed, especially in this day and age, to feel like a brand celebrates everyone. And they do. It's so special.

Do you have any favorite pieces?

I love the Savage X Fenty bodysuits. They fit me perfectly and they’re comfortable. One of my favorite bodysuits is the one I wore for the summer campaign. It’s seafoam green, sheer, and has pineapples on it. It was such a vibe. And then, of course, my look for the show. It was all custom-made and definitely my top favorite piece.

How did you prepare for the show?

Luckily, I work out regularly. It's a lifestyle for me, for my health and mental health. But I did up the workouts. I upped the weight training. I was a little more strict with my diet. I'm usually the one to be like, ‘Oh, I can cheat a little bit and do that,’ but I kept it reeled in for this.

As far as the process of production, we got tested for COVID every day, a week before. So I would literally get up, and the COVID test people would be in my gym waiting for me. They really took everything seriously, as they should. From what I've heard, this is the very first large production that has happened since COVID. So everybody was on their Ps and Qs. Everybody was on top of their sh*t. Even when getting to set, everyone had their masks on and everything ran so smoothly. It was amazing.

Can you tell us more about the look you wore for the show?

Once we started getting COVID tested, we started going into fittings. I had a few options [to wear], but the emerald green look is what I felt the most Savage in. And I was like, ‘This is the look. We're going to go for it.’ The other looks were a bit more tame, but this is my first show I'm walking in. I want to go hard. We went very artistic with the makeup and the hair, too.

Your outfit had long latex gloves and thigh-high latex boots. What was it like wearing those?

First of all, getting them on was a whole situation in itself. The amount of baby powder that was added to me was crazy. To get me in that outfit, it took between 20 to 30 minutes, to be honest. But once it's on, it's on. And I felt so comfortable with myself.

You walk the show during Miguel’s performance and you two share a lovely moment dancing together in the beginning. How did you both prepare together?

We had a dress rehearsal the night before [filming], and that's where him and I really got into the choreography. And then after we left the venue, we actually came home and practiced in our backyard until 1:00 in the morning. Just him and I with the music playing. Our neighbors were probably like, ‘What the hell is going on?’ But we kept going. We wanted it to feel as natural as possible.

Did you watch the show yet?

I have a new film out. It's my first leading role in a feature film. It's called The Last Conception. I just wrote a book so that's hopefully to be released in 2021. I'm building my life coaching platform, and I also booked a TV show, which I can't really talk about yet. It hasn't been announced, but filming starts in January 2021. So definitely watch out for that.