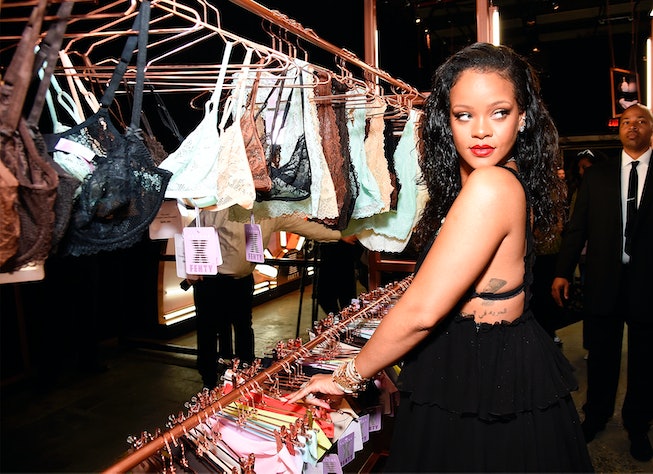 Sure, it may have been less than a year since Rihanna dropped her first filmed Savage x Fenty fashion show on Amazon. But never one to slow down or stop working, the singer-cum-fashion and beauty magnate is already gearing up to drop part two next month. And just like the first show — which featured appearances from the likes of Cara Delevigne, Normani, Gigi Hadid, and Alek Wek and performances by Halsey, Tierra Whack, Migos, and others — this show has gathered up quite the star-studded cast.

Executive produced and creative directed by Rihanna herself, Savage X Fenty Show Vol. 2, which was filmed at the Los Angeles Convention Center earlier this year, is slated to drop on Jeff Bezos’s streaming service in a little over two weeks, on Friday, October 2nd. As was the case with Vol. 1, the release of Vol. 2 will be accompanied by an official Amazon Fashion drop of some of the same Savage X Fenty looks seen in the fashion show. Which means, if you see your favorite starlet sporting a bra that you find yourself wanting to wear, chances are you can find the same one for yourself. (Just make sure you immediately add the item to your cart. These products, which come in sizes ranging from 30A-42H/46DDD and XS-3X, will probably sell out quickly.)

One of last year’s biggest surprise appearances came from RuPaul’s Drag Race season 10 winner Aquaria, who dazzled in a crimson red lingerie look. Apparently, she made a good impression, since this year, Rihanna is continuing that tradition. For Vol. 2, the "Bitch Better Have My Money" songstress has tapped our two most recently crowned queens, RuPaul's Drag Race season 12 winner Jaida Essence Hall and RuPaul's Drag Race: All Stars season 5 winner Shea Couleé. And you already know they'll both slay.

Check out the announcement video below. And remember: Savage Not Sorry.