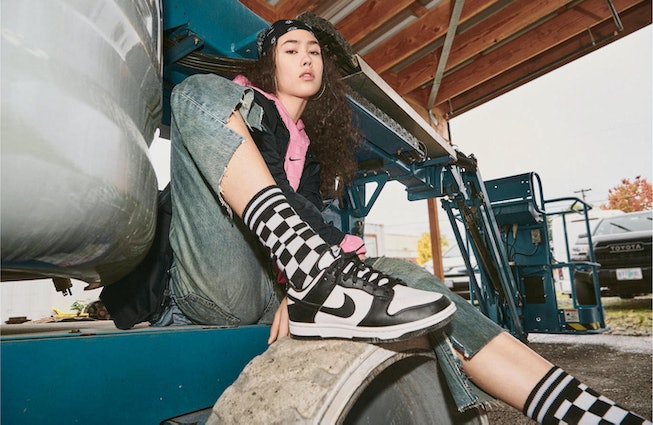 In the mid-2000s and 2010s, Nike Dunks were one of the most sought-after sneaker silhouettes across the board. From the crazy SB colorways to the women's "Sky Hi" style that featured a hidden wedge heel in the sole, Dunks are iconic according to longtime sneakerheads. When Nike decided to bring back the classic 1985 shoe to the world last year, no one knew just how much it would take the industry over by storm (again). Luckily, more Dunks are on the way, as Nike previewed new colorways for Spring 2021.

Announced on Wednesday, Jan. 6, Nike revealed the first three Dunk Lows to hit stores this year. A classic black/white combination, similar to the AMBUSH x Nike Dunk Highs, as well as a red/grey and sail/coast combinations, which take cues from the an Off-White Dunk collab and the Jordan 1 UNC colorway, respectively. So if you weren't able to get your hands on the hype pairs or the resale price is out of your budget, these new beauties might be a great alternative.

Next to Nike's signature colorblocking, these Dunks are also moving more towards inclusive sizing. The sail/coast shoe is strictly exclusive to women and, for the first time ever, Dunks are now being released in children's sizes with the black/white combo in kids, women's and men's. Meanwhile, the red/grey combo will be available in just men's and kids.

With certain colorways already released in other parts of the world, such as China and Latin America, the U.S. won't see an official release until Spring 2021. As for what to expect later on in the year, there will definitely be more exclusive women's and kids colorways, such as the highly anticipated sail/orange peel that resembles a light pale pink expected to drop on February 11, along with the Dunk Low black/hyper cobalt. Plus, the Dunk High white/orange blaze colorway will drop on March 5.

The Spring 2021 Nike Dunk Lows will be available through the Nike app, the SNKRS app, and select certified Nike retailers. You can check the out up close and personal, below.