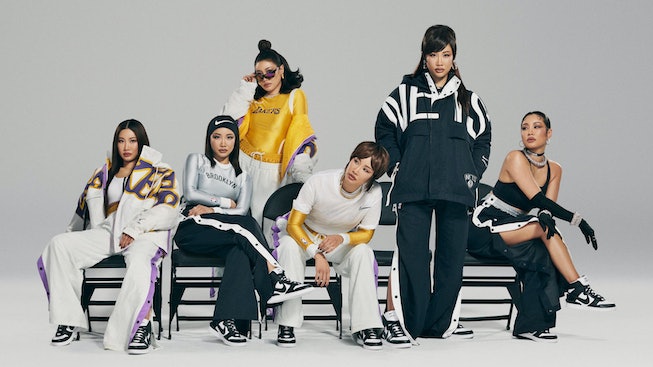 When Yoon Ahn's Ambush does a Nike collaboration, it always quickly flies off the shelves — add the NBA into the mix and her upcoming Nike drop might be her most anticipated collaboration yet. While Ahn has been teasing her fans through social media for quite some time, the official news came on Tuesday, Dec. 1, announcing the new three-way collaboration.

Set to officially release on Friday, Dec. 11, the partnership is the very first time that a female designer has teamed up with both Nike and the National Basketball Association. Wanting to "strengthen women's roles in the world of sports and the fashion industry in general," Ahn told Hypebae in a recent interview, this latest collaboration drew inspiration from the '90s with the numerous amount of female fans of the NBA, along with the lack of stylish basketball merch designed solely for women.

"I thought of all these amazing and strong female characters from the '90s who would come out in men’s clothes, and I wanted to see how we could carry that attitude, but bring in more feminine forms," she told Nike.

The new collection features pop-flared, snap-away track pants, oversized warm-up jackets, and metallic bodysuits all decked out in the signature purple and yellow for the Los Angeles Lakers and classic black and white for the Brooklyn Nets.

Accompanying the new collection is Ambush's new Nike Dunk High outfitted in black and white with a 3-D swoosh that gives the effect of it moving. (Ahn took inspiration from Japanese bike, car, and truck culture.) The sneaker was originally slated to release earlier this year in honor of the 2020 Olympics in Tokyo, which has been postponed until next year.

The Ambush x Nike x NBA collection will release globally on Friday, Dec. 11, as well as the Nike Dunk High sneakers on the SNKRS app for $180. See more photos of the drop, below.