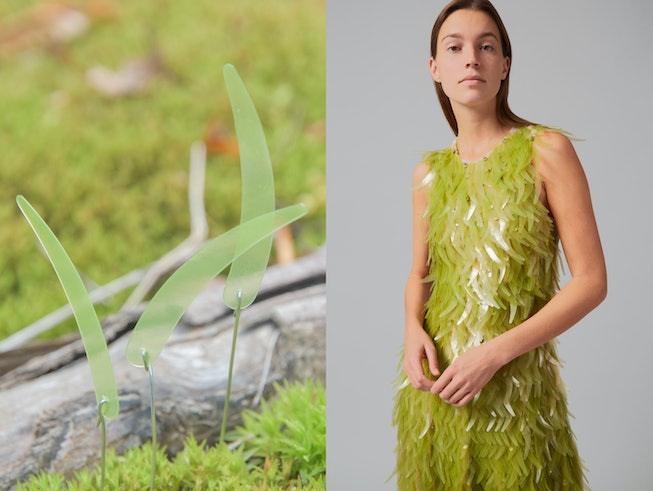 Courtesy of One X One

During a year that's taught us the importance of listening to scientists, it's becoming increasingly impossible to ignore their warnings for the future of the planet. Like the fact that the U.N. declared an 11-year deadline to prevent irreversible damage from climate change — something that should make us rethink our fashion consumption, considering that the fashion industry produces 20% of global wastewater and 10% of global carbon emissions.

Despite this, overconsumption is still on the rise, with experts predicting that by 2050, the fashion industry will be responsible for 26% of human CO2 emissions. The severity of the climate crisis requires a complete system overhaul when it comes to fashion production and practices, and incubator program One X One aims to facilitate this through designer collaborations with scientists and the creation of new technologies.

Orchestrated by Slow Factory Foundation and Swarovski with support from the United Nations Office for Partnerships, One X One is the first incubator of its kind, promoting ways science and design must come together to create new paradigms for the fashion industry. The program covers three important pillars of sustainability — circularity, human-centered design, and regenerative technologies — by pairing designers and scientists who are experts in their respective fields.

Public School's Dao-Yi Chow and Maxwell Osborne and scientist Dr. Theanne Schiros teamed up to create a new lab-grown leather substitute produce sneakers. The "bio-leather" is a new take on nanocellulose produced by SCOBY (symbiotic culture of bacteria and yeast). The dyeing was done using natural, nontoxic dyes and the material was treated with an innovative new process based on Schiros' research, proving this process can be created using over 10,000 times lower human toxicity than chrome-tanned leather, and with two to three orders of magnitude lower carbon footprint than PU or plastic-based leather alternatives.

"We really just embraced it as an exploration and an experiment," says Schiros, emphasizing the importance of leaving room for failure. "We were fine with saying it if it didn't work and that opened up open-mindedness. That's when it comes together, when your people are willing to put themselves out there and spend time and energy on something that might not work."

This experimental process is something that Schiros says can only truly exist outside of the realms of a commercialized structure, but she believes we need more than just new technologies in fashion. "I think collaboration between science and designers is certainly critical for innovating materials for a regenerative circular economy, but it's still creating a material and we have way too many materials in the world," she explains. "We need to start making new things in a thoughtful way through a collaboration with science and innovation to displace polyester and synthetics and toxic dyes, but also address the way we're consuming, as the equivalent of a truckload of clothing goes to landfill every second."

This is an important reminder, says Céline Semaan, CEO and co-founder of Slow Factory Foundation, that approaching solutions through science must come with the awareness that science is often associated with a white-centric viewpoint. "We wanted to change the perception of science in this program," she tells NYLON. "The most scalable incubator we had was between the team Mara Hoffman and Custom Collaborative, whose work was to design and to develop a framework for equity-centered solutions, as educating women and girls falls at number five on the drawdown lists of a hundred solutions that address climate change today."

"Social science is all about people, who are the producers and end users of fashion, so it's foundational to saving the industry in multiple ways," she tells NYLON. "Social and material science developments must align in order to save the fashion industry and the Earth." Okaro believes investing in the social sciences has the ability to bring designers to the table who are not only invested in regenerative and nontoxic materials, but also the positive impacts of these material science developments towards advocacy, policy change, and laws that protect people and the planet, through a human rights lens.

The third designer brought to the table through the One X One program was Phillip Lim, who was interested in working with materials that don't need to be recycled or cleaned up later. The designer worked with researcher Charlotte McCurdy on algae-based sequins and a carbon-neutral fabric that took over two weeks to hand-embroider into an evening gown.

"The core innovation in the algae sequin dress is in discovering what would happen when we linked up regenerative aquaculture and fashion," says McCurdy, who has been researching bioplastic from algae as part of her involvement in the New Museum's cultural incubator, NEW INC. "What would it feel like to live in a society where regeneration was the goal instead of marginally less harmful extraction? This is a vision beyond sustainability, beyond striving to be 'less' destructive. Sequins made of algae are just a visible fragment of a system that allows nature-based carbon capture from the open air to produce a material of value."

McCurdy sees the biggest missed opportunity in the fashion industry currently as "true decarbonization." "How do we imagine a system for materials that is truly renewable and regenerative while following the laws of nature and fulfilling human needs, dignity, and self-expression?" she says. "A concept of 'circularity' that overemphasizes waste gives us a permission slip to make new virgin petroleum-derived polymers in parts of the market. A deep concept of circularity, that acknowledges entropy, inequality, and the global carbon cycle, I have yet to see in the market."

While the One X One initiative birthed a number of exciting projects that prove the possibilities of science in the fashion industry, these partnerships made it clear that there's an urgent need for more conversations and collaborations like it, something Semaan says can be achieved through supporting Slow Factory Foundation and making innovation a priority, while putting more pressure on brands to invest in alternative methods and technologies.

It's also evident that it will be both the combination of creating room for experimentation and science in the industry and the transformation of our consumption habits that will create the biggest impact environmentally, along with advocating for social justice. "I don't think we should save the fashion industry —the fashion industry is not in danger — I think we should save the lives on this planet," says Semaan. "What's in danger is our survival on this planet, and the survival of all other species. So we can slow it down, design for reparation, for justice, and collectively use our creativity to solve real-life problems. That's what needs to scale."